by Andy Massimilian
in Guns, Handguns
0

To fit a wide variety of shooters, the VP9 Tactical comes with a large, glove-friendly triggerguard, ambidextrous controls and a polymer grip frame that can be customized with interchangeable side panels and backstraps.

Firearms made with threaded barrels are becoming much more prevalent than a few years ago, when threaded barrels were strictly aftermarket options. Though sound suppressors are still not mainstream accessories, every major handgun maker is now offering at least one suppressor-ready pistol for the first time ever, though Glocks are distributor exclusives and not catalogued items. This growth rate will only accelerate after a July 2016 BATFE ruling streamlined the transfer paperwork by changing the required “Chief Law Enforcement Officer” (CLEO) approval to CLEO notification. Suppressors still fall under the National Firearms Act (NFA), and their purchase has onerous requirements, including a $200 transfer tax, fingerprints and registration with the BATFE, but there’s some congressional support to remove these entirely harmless sound mufflers from the NFA and treat them like ordinary firearms without the tax and restrictions.

Heckler & Koch has historically offered threaded barrels on many of its pistols, so it’s no surprise that the VP9, which was released in 2014, is now being offered in a Tactical version. The VP9 Tactical is the same as the standard VP9, except it comes with a 4.7-inch barrel with metric 13.5×1 left-hand threading, a knurled thread protector, night sights and three 15-round magazines instead of two.

The VP9 Tactical is made at Heckler & Koch’s German factory and is constructed with a polymer frame and a steel slide that houses a cold-hammer-forged, polygonal-rifled barrel that outlasts many other designs. The pistol is 7.95 inches long and 5.41 inches tall, making it a duty-sized handgun that is slightly longer than the Heckler & Koch P30L.

It’s been my experience that a pistol’s ease of shooting is a function of three factors: how it fits in your hand, the trigger and the sights. The VP9 Tactical’s fit is exceptionally comfortable; paired with my HK P30, these pistols fit my hands better than others in my collection. The polymer grip has three finger grooves on the frontstrap that are wide enough to be comfortable. The grip can also be adjusted to fit hands of different sizes by switching the backstrap or side panels. Changing the grip not only increases comfort but also allows the shooter to ideally position his or her finger on the trigger so that it can be pulled straight to the rear without disturbing the sight alignment. You can also reduce the grip size in winter when you’re wearing gloves, for example. Three different sets of backstraps and grip panels are included with the pistol. Adjustments are made by removing a single roll pin in the grip with a drift punch.

The VP9 Tactical has superb ergonomics, with fully ambidextrous slide and magazine release levers that are large enough to activate easily without changing your grip. And a consistent grip is important to marksmanship. The large, easy-to-reach slide release levers also allow you to chamber a round by activating the release instead of pulling back and releasing the slide. Retracting the slide and releasing it to chamber a round may add a minor additional amount of spring tension and slide travel, but it is unnecessary for HK pistols, time consuming and requires two hands. Finally, large levers facilitate clearing a double-feed stoppage, which is easiest done by locking the slide to the rear and clearing the feedway. Accessing large, ambidextrous levers especially matters if you must lock the slide when one hand is incapacitated. There are also “charging supports” on both sides of the slide that make it much easier to grasp the slide.

Like other polymer-framed HK pistols, the VP9’s ambidextrous magazine release levers are at the rear of the triggerguard and are designed to be activated with the trigger finger, not the thumb, which would require a change of grip for most shooters. To release the magazine, slide your trigger finger rearward along the triggerguard until the release is contacted, or quickly tap the lever with the tip of your finger. With familiarization, you can quickly, intuitively reload.

HK engineers focused on designing a better trigger system for the VP9 than competitive polymer-framed, striker-fired pistols. According to my Lyman digital trigger pull gauge, my sample VP9 Tactical had a trigger pull weight of 5.8 pounds, though the factory-specified weight is 5.4 pounds. The trigger has about 0.25 inches of take-up at 2.4 pounds of resistance, followed by a break of 3.4 pounds with about 0.1 inches of travel at the break. Once the take-up or slack is removed, trigger resistance builds quickly, followed by a predictable break and very slight overtravel. The trigger reset is readily felt after releasing it about 0.25 inches. The trigger also has a pivoting safety toggle similar to a Glock’s that prevents accidental discharges. The VP9 Tactical’s trigger is also wider, which makes the pull weight seem lighter.

As for targeting, the VP9 Tactical comes with three-dot night sights. The rear sight has an angled forward edge to facilitate racking the slide when only one hand can be used. Though functional, these sights are not high enough to be used over a mounted suppressor. Of course, replacing the sights is an option. Currently, Heinie EZ-Lock Ledge Qwik Straight Eight sights are the only nights sights I know of for the VP9 and P30 pistols that are tall enough to give an adequate view of the target when using a 1.13-inch-diameter suppressor. They also have a cocking ledge on the rear and one tritium insert in the front with a smaller insert below the rear notch.

Changing sights is never as easy as it sounds, however, and drifting them out with a brass punch is certain to mar your pistol’s finish. The MGW Sight Pro adjustment tool I bought solved this issue for me, and it paid for itself after several sight changes by helping me avoid gunsmithing charges. Besides removing and replacing sights, this sturdy tool can help you make precise windage adjustments.

The Heckler & Koch VP9 Tactical was accurate and absolutely reliable with several types of ammunition. Though the night sights on the VP9 Tactical are more versatile than the photoluminescent sights used on the standard VP9, the white circles surrounding the tritium vials could be distracting and were a tad reflective in bright light. However, the VP9 Tactical required no sight adjustments and shot directly to the point of aim (POA) with the Freedom Munitions load and no more than 2 inches higher or lower than the POA with every other load.

To test the VP9 Tactical as it will most likely be used, I added an AAC Ti-RANT 9 suppressor. Shooting a pistol with a sound suppressor is bit different than shooting without one in several respects. First, the suppressor reduces the sound signature, most noticeably with subsonic ammunition (i.e., loads with 147-grain bullets) where there’s no supersonic “crack” for a silencer to reduce. According to AAC, the Ti-RANT 9 reduces the sound signature by 35 to 38 decibels. Secondly, the recoil is perceptively reduced and the impulse is dispersed—an initial impulse from the bullet accelerating and the action cycling, and a smaller final impulse from the movement of the suppressor’s booster device. (These devices ensure reliable cycling on pistols that do not have fixed barrels.) Thirdly, muzzle flash is almost completely eliminated, as the tube contains any residual burning powder.

Of course, adding a suppressor like the Ti-RANT affects the pistol’s handling characteristics, moving the balance point forward. While the entire weapon system weighed about 2.2 pounds with the suppressor attached but no amm—which I wouldn’t consider heavy—your speed on target will be somewhat slowed down by the extended length. 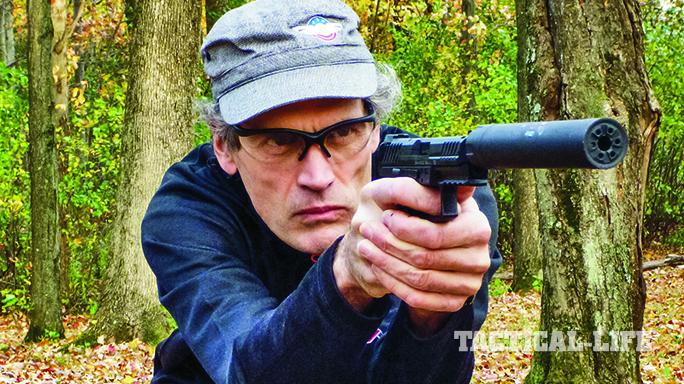 The VP9 Tactical shot small groups dead on target at 15 yards with the Freedom Munitions load but landed wider groups 6 to 7 inches away from the POA when suppressed. These wider groups when shooting with the AAC Ti-RANT were likely caused by inconsistent aiming because the factory sights were not tall enough to clear the suppressor tube and give an unobstructed view of the target.

For those who watch the chronograph, suppressors yield minor upticks in velocity caused by gas contained inside the tube still pushing the bullet forward but without the frictional resistance caused by the barrel rifling. The increase ranged from 9 fps with the Winchester ammo to 29 fps for the Freedom Munitions load.

The VP9 Tactical is a well-made pistol with features that separate it from the plethora of polymer-framed pistols available from a standpoint of ergonomics and ease of shooting. In fact, this pistol makes many other designs seem out of date by comparison. For optimal use with the AAC Ti-RANT suppressor, this system only needs a taller set of sights.

This article was originally published in ‘Combat Handguns’ March 2017. For information on how to subscribe, visit outdoorgroupstore.com.