by Leroy Thompson
in Guns, Handguns
0

For my first 20 years of owning handguns, I thought of the Browning Hi-Power as a useful tool. When working on close-protection teams or training counterinsurgency troops, it was the weapon I carried because it was reliable, had a high magazine capacity when most other semi-autos didn’t, was chambered for the readily available 9mm round and was generally available in places I was working if I couldn’t take my own weapon. During that period, I did have one custom Hi-Power built, but it was just a more efficient tool. 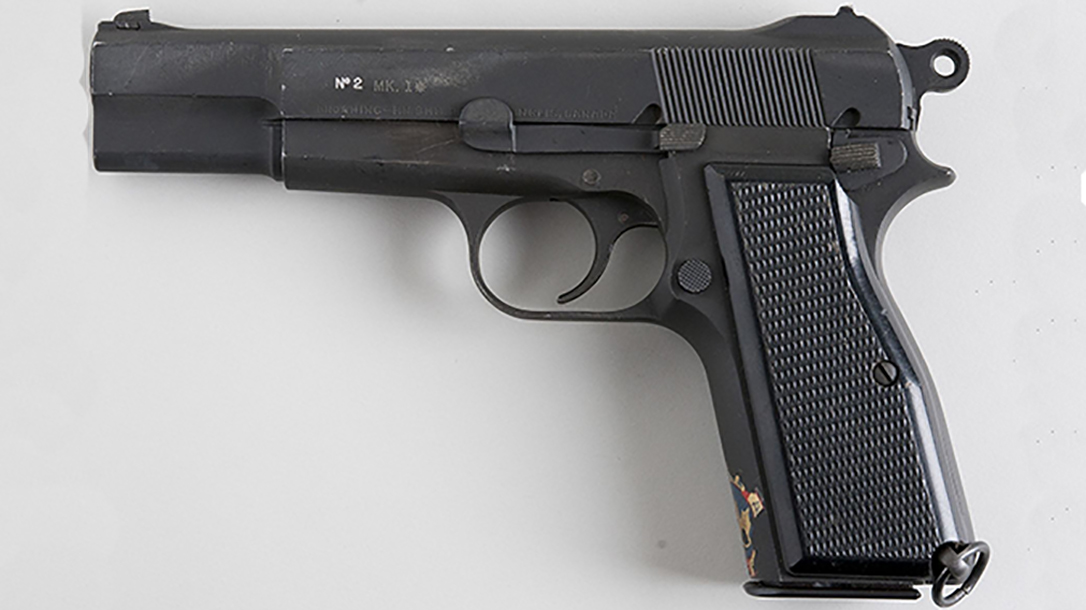 But somewhere along the line, I sort of became a Hi-Power collector. A number of alloy-framed Hi-Powers that Fabrique Nationale (FN) had made for Belgian motorcycle cops were imported. I thought those were pretty cool, so I ordered one, well, really two. Without thinking, I had started a Hi-Power collection. I had a chance to buy a pre-World War II Belgian model with a tangent sight, and it now lives in my safe. As I got older and nostalgia kicked in, I also decided to acquire examples of the more exotic Hi-Powers I had carried back in the day. I have an Indian one, and I’m looking for an Indonesian one. I should probably pick up an Argentinian one as well since, on one job, I carried one that had come back with many twins in a duffel bag from the Falklands War.

And I bought an Inglis Hi-Power. I had carried a Canadian Inglis model a couple of times and found it most noteworthy that its magazine would take 14 instead of 13 rounds, and it had marginally better sights than FN Hi-Powers at the time. In some of the locales, I was working against goblins of various insurgent flavors, and that extra round seemed useful. More recently, I became especially interested in the Inglis as a historical artifact, partially because I had done a book on WWII British airborne troops who were armed with the Inglis for the logical reason that it took the same 9mm round as their Sten guns. Also, Collector Grade Publications published Clive M. Law’s excellent book, “Inglis Diamond: The Canadian High-Power Pistol.” After reading it, my interest in the Inglis Hi-Power deepened.

The story of the Inglis Hi-Power is quite interesting. John Inglis and Company had been around since the mid-19th century but didn’t get into weapons manufacturing until World War I. During the Depression, the company went into receivership but was purchased by a group of investors with the intent of producing various products, including armaments. Inglis re-entered arms production when it was awarded a contract in 1938 to produce machine guns. By the beginning of WWII, the ordnance division of John Inglis and Company was tooled up and producing Bren light machine guns, eventually delivering more than 100,000 by the end of the war.

How the Hi-Power came to Canada and Inglis is an interesting tale of wartime intrigue and resistance. After Belgium fell to Germany in May of 1940, FN became a subsidiary of the Germany’s DWM, producing weapons for the Wehrmacht. However, the director of FN and his deputy were in England when Belgium fell and did not return.

More importantly, small-arms designer Dieudonné Saive, who had perfected John Browning’s Hi-Power concept, escaped to England in the summer of 1941, bringing with him the drawings for a new self-loading rifle that would eventually become the FN49 as well as his knowledge of the Hi-Power. Although the British had purchased a substantial number of Colt 1911A1 pistols from the U.S., they were interested in producing the Browning Hi-Power and tasked Saive with reproducing from memory a set of manufacturing drawings for it, initially with the intent of producing it at Royal Small Arms Factory (RSAF) Enfield. In fact, Enfield produced prototypes by the end of 1943, although the pistol never went into production there.

Meanwhile, across the Atlantic in Canada, there was interest in producing the Hi-Power for China. In April of 1943, China requested 180,000 Hi-Powers with wooden shoulder stocks/holsters through the Mutual Aid Plan with Canada. John Inglis and Company would make the pistols; however, various problems had to be overcome. Licensing of the design subsequently was undertaken with representatives of FN and Browning.

Production drawings were also necessary, and their acquisition was progressing on various fronts. The British offered the drawings produced by Saive at no charge. Also, an original set of Belgian drawings was supposed to be sent from southern France. Inglis engineers also had six examples of pistols from the pre-war Chinese contract, which they were reverse engineering. It was still considered important to recruit two Belgian engineers, Saive and Rene Laloux, who had worked on the final production of FN pistols before the war. In August of 1943, an agreement was reached to pay FN a royalty of 25 cents for each of the 180,000 pistols, plus 15 cents on pistols over that number, but to not produce more than 250,000 total.

As Inglis neared production of the Hi-Power, more interest in the pistols came from the Canadian armed forces and the British Special Operations Executive, or SOE, which had a clandestine, behind-the-lines mission similar to the Office of Strategic Services (OSS) of the U.S. The SOE wanted 50,000 Inglis Hi-Powers, but not with the Chinese wooden stocks/holsters or tangent sights.

By January of 1944, prototypes of the Chinese Inglis Hi-Power were being tested, and production began in February. The Chinese had specified that the pistols come with holster stocks largely because of the popularity of similarly stocked Mauser C96 “Broomhandles” in that country. Inglis produced the metal parts for the holster stocks themselves but subcontracted the wooden parts to Small Arms Limited (SAL) in Long Branch, Ontario. The contract called for SAL to make 140,000 holster stocks and 40,000 canvas holsters.

But as the initial 4,000 Inglis Hi-Powers delivered to the Chinese were sitting in warehouses in India rather than fighting the Japanese, the Canadian Government Mutual Aid Board suspended the contract. Only these 4,000, plus an additional 14,487 awaiting shipment, had been produced. Even these 14,487 pistols did not make it to China. In addition, orders that had materialized from the Canadian and British armed forces, as well as the SOE, would absorb these “No. 1” Chinese contract pistols, plus later production.

The story of the Chinese Inglis Hi-Powers was not over, however, as an additional 39,760 pistols were delivered to China between June and November of 1945 under a new contract. China asked for more aid, but it was denied, as the Communists appeared almost certain to defeat the Nationalist Chinese. In fact, Communists later captured and used many of the Hi-Powers that were delivered to the Nationalist government.

However, before we leave the Chinese pistols, a bit more should be said about the holster stocks. For the various Chinese contracts, SAL had manufactured 29,038 holster stocks. However, as of September 7, 1945, when the final contract was cancelled, there were 1,053 surplus stocks on hand. This became a boon to collectors who could acquire some of these stocks in virtually new condition over the years.

And I want to make an important point about these shoulder stocks. The Bureau of Alcohol, Tobacco, Firearms and Explosives (BAFTE) has ruled that an original Inglis Hi-Power with the letter “C” in the serial number, indicating pistols produced as part of the Chinese contracts—even if they did not go to China—are legal with an original SAL-produced shoulder stock. Note, however, that despite a large number of reproduction stocks being sold, joining them with an Inglis Hi-Power technically creates a short-barreled rifle, which requires special registration under the National Firearms Act.

To meet demand, Inglis developed the “No. 2” version, which eliminated the tangent sight and stock lug. During testing, some changes were suggested to the barrel lug, slide, ejector and extractor, resulting in the No. 2 Mk1* Inglis. This pistol was produced for the SOE, which also received some of the leftover Chinese No. 1 pistols. British and Canadian armed forces also tested it. In September of 1944, the Canadian Army adopted the Inglis No. 2 Mk1* with some of their first deliveries also coming from the leftover Chinese No. 1 models. Production of the No. 2 Mk1* accelerated. By January of 1945, the Canadian armed forces had ordered 25,400 pistols. In addition, by May that same year, the Canadian army had received a total of 8,479 No. 1 pistols and 50,648 No. 2 Mk1* pistols.

Meanwhile, the British army continued testing and evaluating the No. 2 Mk1*. Late in 1944, a decision was made to adopt the No. 2 Mk1* for British airborne forces. Military leaders issued an initial requirement of 20,000 pistols on November 26, 1944, with 18,343 of those diverted from the SOE. On January 10, 1945, the British ordered another 15,000 pistols for its airborne forces and some other “non-traditional” combat units. However, the British military did not adopt the Inglish Hi-Power for its other branches. 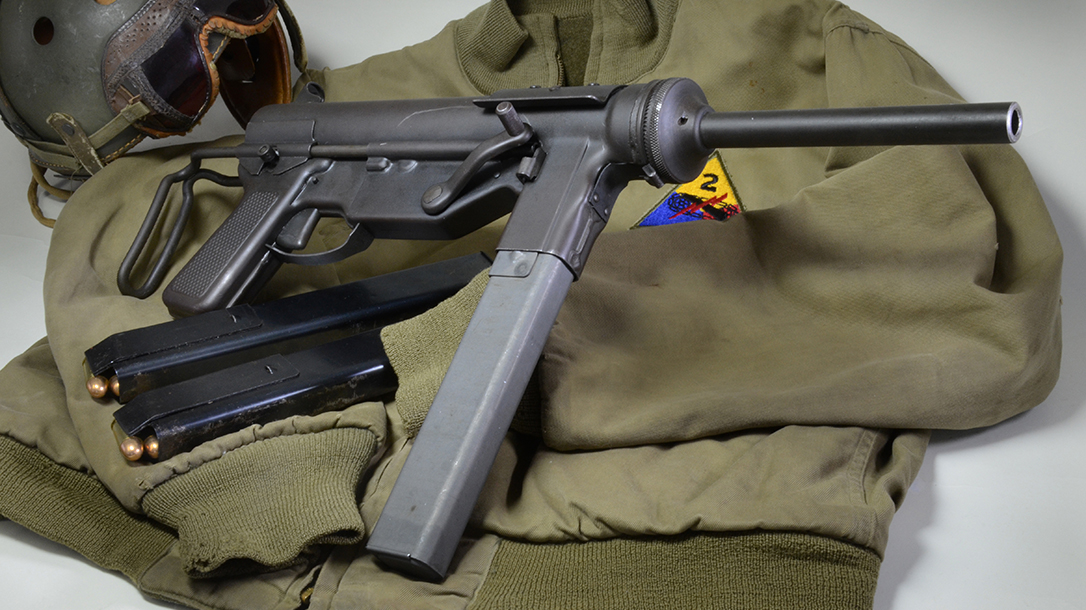 In 1947, in an attempt to standardize a 9mm pistol for NATO conformity, the U.S. expressed interest in a lightweight version of the Inglis Hi-Power. Two lightweight versions were sent to Springfield Armory for trials in August of 1948, but there appears to have been no impetus to adopt this pistol. Note that the Colt Commander and S&W Model 39 were also both developed during the late 1940s as a result of this interest in a lightweight 9mm pistol for possible adoption by the U.S. military. There was also experimentation with a double-action Inglis Hi-Power that did not progress past the prototype stage.

The Canadian armed forces, however, kept using Inglis Hi-Powers for decades. In fact, in the 1980s, Diemaco, which produced the Canadian versions of the M16 and M4, was given a contract to overhaul all of the military’s Inglis Hi-Powers.

By October of 1945, the British had received 48,721 Inglis Hi-Powers, including 17,008 No. 1 variants. With the war over, 10,200 of the Inglis pistols that had been produced for the British were still sitting in a Royal Canadian Ordnance Corps depot awaiting delivery instructions. Until the mid-1950s, the Hi-Power remained the standard-issue pistol for British airborne troops. In 1954, the army decided to replace its .38-caliber revolvers with Browning Hi-Power pistols. However, there were not enough Inglis pistols to fill the need. Those in service were kept running via refurbishment at RSAF Enfield. But by the end of the 1950s, the supply of spare parts from Canada was depleted. As a result, in 1964 the British began buying FN Hi-Powers from Belgium, which were adopted as the L9A1. Some of these are still in use today, though they’re being replaced by the Glock 17.

End Of The Line

By the 1980s, the Inglis Hi-Power had been regulated to reserve status in the British armed forces and, in 1993, it was also officially declared obsolete and sold off, mostly in the United States. Lucky us! When Inglis Hi-Powers first came to the U.S., I bought at least a half dozen and kept one of each type. I think many other collectors snatched them up as well, though I do still see them for sale online and at gun shows. To be honest, for a Hi-Power, the prices still aren’t bad for a historic—but very shootable— pistol. The Inglis certainly ranks among my favorite WWII pistols.