by Will Dabbs, MD
in Guns, Handguns
0

"Should the unlikely become reality and the president desperately need me to go save a girl and the world, I would have the perfect gun for the job."

The chiseled gun-writer-turned-CIA asset stood noiselessly and alone in the frosty rain of an Afghan midnight. The sensations of cold and fatigue were gone, banished to that distant place where he sent things for which he had no need. He melded motionlessly with the darkness—invisible, silent, lethal.

His package was a lonely Swedish supermodel. Her career had represented the coveted trifecta of Victoria’s Secret, Sports Illustrated and the Dallas Cowboys cheerleaders before her recent abduction. Lamentably, her preternatural beauty, genius-level IQ and facility with firearms had intimidated prospective suitors.

Her captors were terrorists, and their leader was an astonishingly bad person. He extorted money from his own grandmother. He judged people based on physical attributes of which they had no control, and despised, as a matter of principle, puppies and Santa Claus. The man disliked children—even the little cute ones—and eschewed personal hygiene.

The asset slid his suppressed Kimber 1911 from its shoulder holster and thumbed off the safety as he breached the cave, the shadows and sleeting rain surreal in his night-vision goggles. The startled guard looked up from his book, and the silenced handgun coughed twice in rapid cadence. The terrorist pitched out of the mouth of the cave motionless, his lifeless eyes glossing over in the pelting rain. The asset pivoted and pumped two more rounds into the man’s companion, looking incredibly cool while doing so.

The girl was behind a heavy steel door, just like the one from the first Iron Man movie. The asset slid it open silently on its massive rusted hinges. She was bound securely to a heavy chair, her piercing blue eyes looking plaintively in the gloom and her delicate mouth gagged with a grimy rag.

“I’m a friend,” the asset whispered as he quickly loosened her bonds. “But we’ve got to go, now.”

The athletic young woman was out of the chair instantly. She snatched a nearby Kalashnikov and chambered a round before sliding the selector to the middle position. Fire accented her mesmerizing eyes.

They found their way blocked by the terrorist group’s leader and his two most repugnant henchmen. The alpha terrorist smiled in the dim light, his bejeweled eye patch glistening from the rain, before reaching for his sidearm. The asset reflexively emptied his pistol. The girl unleashed her AK from the hip and messily dispatched the villain’s comrades. In the haze of burnt gunpowder, they exchanged glances, sharing an unspoken thought. She would void her lucrative modeling contracts. He would curtail his gun writing. They were clearly soulmates who were destined to become the CIA’s most effective counter-terrorist team. They clasped hands and stepped into the cold rain. It was three clicks to the waiting MH-6 Little Bird helicopter and destiny. 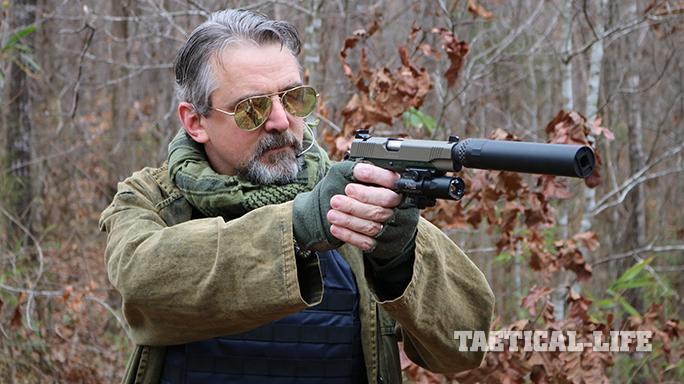 OK, the real world is nothing like that. I have met a couple of spooks, and they were disappointingly normal guys. Standing in the cold rain makes everybody miserable, and in the 21st century, it’s much easier to shape policy with a Reaper drone spewing Hellfire missiles than via some poor slob slinking about with a handgun. Sound suppressors are quiet but not silent, and of the unfortunate folks I have seen shot, none instantly called it a day without at least some undignified wiggling. Even pretty girls have bad breath in the morning, and babes like the one described never have difficulty finding dates.

We gun nerds—all of us—are little children at heart. It pervades our quirky hobby. No matter what our day jobs are, during quiet moments, we dream of exchanging our workaday facades for a robust life of action and intrigue. Were we to rescue lonely Swedish supermodels from the evil clutches of soulless villains who deserved what they got, we would wield the proper tools. The ultimate operational spy pistol would be powerful, accurate, quiet and cool. And although the typical American gun nerd will rescue few Swedish supermodels, we can build up the ideal gun just in case.

Of course, the chassis would be a 1911. Centuries in the future, when the last plastic Glock has been relegated to some old geezer’s gun collection in favor of a phased plasma rifle in the 40-watt range, dedicated gun nerds will still be throwing rounds downrange with John Moses Browning’s timeless steel handgun. Contrived when design meant drawing with a pencil and a ruler, the 1911 sports a trigger that has yet to be bested in any other platform, regardless of its provenance.

Lots of folks churn out 1911 pistols. Hand-built blueprinted guns blur the lines between combat implement and art, and one company even makes a couple of 1911s out of a meteorite for folks who already have everything. However, for a refined 1911 that strikes the proper balance between high-end features and a combat implement you can use, Kimber is a top go-to choice.

The Kimber Warrior SOC in .45 ACP is a custom-grade 1911 offered at a production price. It features a Dark Earth slide with “melted” edges and a dark green frame, both of which have been finished in KimPro II for extra durability. My test sample is a Threaded For Suppression (TFS) model with a threaded 5.5-inch, match-grade, stainless steel barrel held in place with a match-grade bushing. A knurled thread protector is included.

This Kimber Warrior SOC variant is also equipped with suppressor-height, three-dot tritium night sights and aggressively textured G10 grips. The dust cover is railed for accessories, and production models come with Crimson Trace Rail Master lasers for enhanced accuracy. As for how it handles, the adjustable trigger comes from the factory set at 4 to 5 pounds, and the slide moves on the frame like greased glass.

Gemtech is a plank holder in the modern American suppressor market. Since 1976, Gemtech suppressors have been used by all branches of the U.S. military and throughout the American law enforcement community. Its G-Core line reflects the state of the art in pistol-mounted sound suppressors.

The G-Core uses a monocore baffle stack. This means that the guts of the suppressor are cut from one cylinder of aluminum. The design of the baffle stack uses advanced engineering concepts such as finite element analysis and computational fluid dynamics. It’s also, coincidentally, cut to look like a series of G’s for a bit of imbedded subliminal Gemtech marketing. G-Core sound suppressors are currently available in .45 ACP and 9mm and incorporate built-in Nielsen devices.

The Linear Inertial Decoupler, or Nielsen device, is so mechanically extraordinary that it makes the International Space Station appear fatuous. This inspired device uses a bit of wasted muzzle energy to give the nose of the slide a small tap with each round fired. This extra boost ensures that a Browning-inspired recoil-operated handgun remains reliable despite the extra mass of the suppressor hanging off the barrel.

I added another item to this Kimber Warrior SOC (TFS)—the SureFire X400. While it isn’t cheap, it represents the top of the heap in the world of combination light/laser units. The X400 weighs next to nothing and feeds from standard CR123 batteries. The pivoting tail-cap switch is easily accessed with either index finger, and a handy flip switch cycles between the light, laser or both. The LED illuminator produces 600 lumens of brilliant white light to help you identify threats.

The resulting package is not as heavy as you might think, yet it thoroughly tames .45 ACP recoil. The suppressor is not quite hearing safe until you add some ablative material, but it would improve your lot should you touch the thing off within an Afghan cave. The X400 keeps you reliably prickly day and night indoors and out. Double- and triple-taps flow so easily you’ll develop a hole in your wallet. 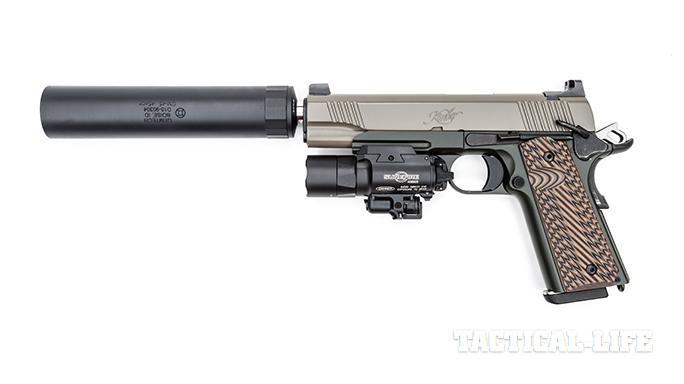 My creaky knees groan in cacophonous testimony to a foolish youth sacrificed to the U.S. Army, and the only thing that might make me appear chiseled is Photoshop. If the CIA were to seek my services, that would imply that every other able-bodied American, including Cher and Pee-wee Herman, was unavailable, or that the agency had inadvertently dialed the wrong number. Any foot ingress into hostile territory would take time, and the thought of a nighttime HALO jump makes my back hurt. Regardless, should the unlikely become reality and the president desperately need me to go save a girl and the world, I would have the perfect gun for the job. Would you?