Next-Gen Steyrs: Pairing the Steyr L9-A2 MF With the Steyr AUG A3 M1

Like many people, when I hear the name Steyr, my mind goes to the movie Die Hard and the main German henchman toting a Steyr AUG. The gun is iconic in terms of looks and performance, and it’s on an astronomical number of wish lists. But Steyr also has a handgun side of the house. As an instructor, I have seen Steyr pistols off and on in classes since the mid-1990s, and they have always performed well. This is no surprise considering that Steyr Mannlicher has been producing guns for over 155 years. With this as a backdrop, I was excited to learn that Steyr had developed a new handgun and AUG, and I got my hands on both for testing. Let’s start with the pistol. 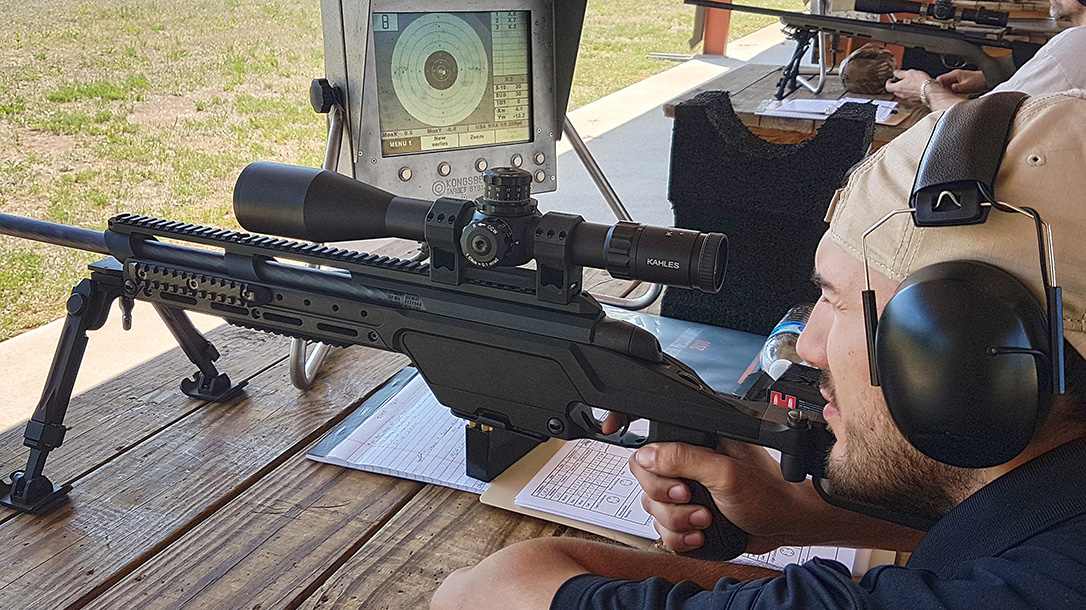 The L9-A2 is a polymer-framed, striker-fired pistol with a trigger-mounted safety that allows the pistol to be fired once it’s depressed. Overall, this is a good-looking pistol with an attention to aesthetics. From its slide serrations to its unique grip texturing, the gun gets a 10 for its unique looks. But there’s a lot more going on here.

When you pick the Steyr L9-A2 MF up, you’ll immediately notice the grip angle, which I measured at about 20 degrees. This helps the gun point very naturally. The grip is also set deeper under the slide with an extended beavertail which allows the shooter to get a higher grip without fear of slide bite. With a tip of the hat to shooters requiring gloves, the oversized triggerguard provides excellent clearance for cold weather shooting.

Of course, as with many polymer-framed strikers today, the Steyr L9-A2 MF comes with interchangeable backstraps so the gun can fit a wide variety of shooters. But Steyr has gone above and beyond by included interchangeable side panels as well. To me, this is a sign that that the company wasn’t simply copying a fad, but looking to make a gun capable of fitting just about anyone’s hands.

Unlike its predecessor, the L9-A1, the pistol has no real finger groves. While there is a slight indentation below the triggerguard for the middle finger of the strong hand, the remainder of the grip has horizontal grooves along the front and backstraps. Finally, you’ll find textured, dished-out areas for your thumb and trigger finger, and the dust cover features a rail for adding a light, laser or combination unit.

The L9-A2’s operating controls are pretty straightforward and easily managed. The model I was sent for testing had no manual safety, but I’m told there will be one available. The steel slide stop is located above the grip on the left side of the frame, a little farther back than you find on most guns in this category. The upside is that it is much easier to index and operate. The magazine release is long and can be switched to the right side for lefties out there.

The takedown lever can be found on the right side of the gun, near the center. It has horizontal serrations that provide plenty of purchase. Right behind the takedown lever is a lockout safety. This is a spring-loaded feature that utilizes a special key provided by Steyr. Use the small key to turn the lever to “S,” and the trigger is locked, preventing the pistol from being fired or disassembled.

Taking the gun down is pretty simple. Safely clear the pistol of ammo and push in on the lockout safety. Depressing this will allow the takedown lever to swing free. Swing it downward, and the slide will be released. Like a Glock, you will need to depress the trigger before the slide will come free. Did I mention to make sure the pistol is clear of ammunition? At this point you can field-strip the gun and remove the recoil spring and guide rod. This allows the barrel to slide forward and out. Reversing the process reassembles the pistol, though the lock button need not be depressed.

The L9-A2 has three loaded-chamber indicators that provide both visual and tactile confirmation of the chamber’s condition. The barrel hood has a small cutout that allows you to see the rim of a chambered round. A more tactile indicator is the external extractor. When the chamber is loaded, the extractor sticks out a bit and can easily be felt in low-light conditions. The third indicator is more unique. A spring-loaded plunger extends from the top of the bolt face and runs through to the rear of the slide. When a round is chambered, this plunger extends from the rear of the slide for easy visual and tactile confirmation.

This brings us to the sights, which will cause a double-take among most shooters. The unique trapezoidal sights are designed for quick alignment. They consist of a triangular white front sight and a rear sight that actually angles inward. I found these sights were indeed quick to acquire and align. They are a bit on the beefy side, which could provide a challenge when it comes to extremely precise fire, but they are designed well.

The Steyr AUG is the original bullpup, and today it’s used by over 20 militaries around the world. The most recent AUG A3 M1 is a civilian version of that gun that comes in a few different configurations relating to its rail or optics options. For this test, I received a special model with several upgrades made by Corvus Defensio, a company that specializes in AUG upgrades.

My AUG came with a new top rail, KeyMod handguard, case deflector, anti-rotation QD sling attachment and enhanced magazine release all made by Corvus Defensio, a company that specializes in AUG parts. These upgrades essentially amp up the carbine’s ergonomics and reliability. Unlike the original Steyr AUG A3 M1 rail, the Corvus Defensio M1 Receiver Rail reaches almost to the ejection port, making it easier to use short-eye-relief optics. Then you have the handguard, with dozens of KeyMod slots for accessories, and the new case deflector ensures spent casings are ejected forward so they won’t interfere with both right- and left-handed shooters. Finally, Corvus Defensio’s Anti-Rotation QD Sling Attachment prevents your sling from twisting, and the Enhanced Magazine Release is much larger, speeding up reloads.

While these are nice touches, the heart of the AUG is the same. A short-stroke gas piston operating system is paired with a heavy 16.4-inch barrel, but thanks to the bullpup design, this 5.56mm comes in at only 28.15 inches despite the full-length barrel. These are truly compact dimensions, as the AUG is roughly 8 inches shorter than an AR with a similar barrel. And the piston operation is important, as it’s cleaner than a direct-impingement system, and the AUG can adjusted to two different settings to run reliably even with the dirtiest ammo in adverse conditions.

Like earlier AUGs, the barrel can be quickly swapped out, and the gun itself is easy to take down for cleaning and maintenance. The controls are ambidextrous, and my test gun uses proprietary translucent magazines that hold 30 rounds. As you can probably tell, I couldn’t wait to get to the range.

Shooting the Steyr L9-A2 MF was quite enjoyable. Its ergonomics are superb, and the pistol ran without any malfunctions of any kind. The gun has a relatively low bore axis, which, when combined with the grip angle and texturing, reduces muzzle rise significantly. It is also a beefy gun, which I like. There is sufficient real estate on the grip to run the gun at pace without it slipping in your hands.

The trigger on my test sample was good and broke at about 5 pounds. It has a short stroke, and the reset was quite short, too. Overall, it’s a pretty darn good trigger for a gun in this class. The only thing that made the day on the range better was the fact that I had another Steyr on hand!

My test AUG came with a Kahles 1-6x24mm K16i scope that worked really well with the carbine. While I cut my teeth on the AR platform, I found the manual of arms for the AUG to be pretty natural. As mentioned, this a very small package, and I found it to be very maneuverable and quick to shoot. If you have never run a bullpup, I encourage you to get your hands on an AUG and give it a spin. The recoil is mild with a unique pulse. This translates to smooth shooting and rapid follow-up shots. I ran the AUG like I had stolen it and enjoyed every second of it. It digested a variety of ammo without a single hitch during the whole day of testing. 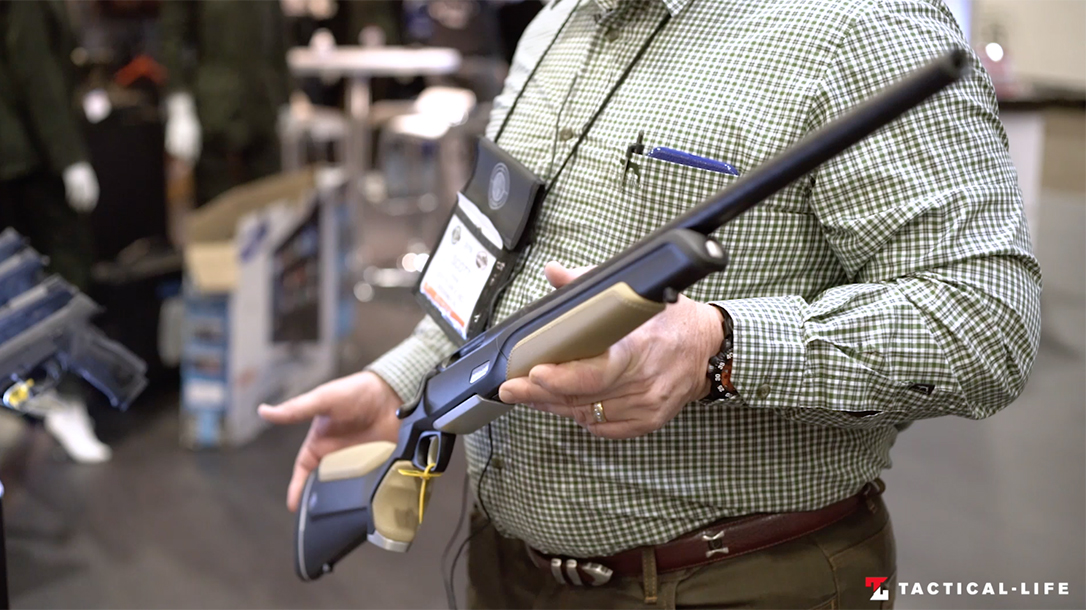 VIDEO: Is the Steyr Monobloc the Most Accurate Out-of-Box Rifle Ever?

Why own an AUG? Well, it offers an option beyond the standard and sometimes monotonous AR world. On top of that, it is simply a cool rifle. No, that’s not exactly a scientific finding, but it’s a fact. The unique look, operation and history of the AUG make it a great option when you are shopping for a rifle. The L9-A2 is a great handgun for similar reasons. It might not have as much history or pop-culture cache, but it’s unique and performs better than many other striker-fired pistols.

Steyr released its first gun in 1864. I am sure some form of old-school gun writer sang its praises back then. Well, I’m going to jump into that historic line and say that Steyr has once again brought fantastic guns to market. Don’t pass up a chance to try out the new AUG or L9-A2. You’ll come away impressed.