One of my favorite blackpowder pistols is extraordinarily difficult to shoot. In fact, it is often difficult to hit anything with it at any great distance at all. It is cumbersome, clunky and unwieldy, and it is the oddest-looking contraption a person will ever lay eyes on. That’s because it is a Classic Arms replica of the Ethan Allen pistol, the Pepperbox revolver in .36 caliber. 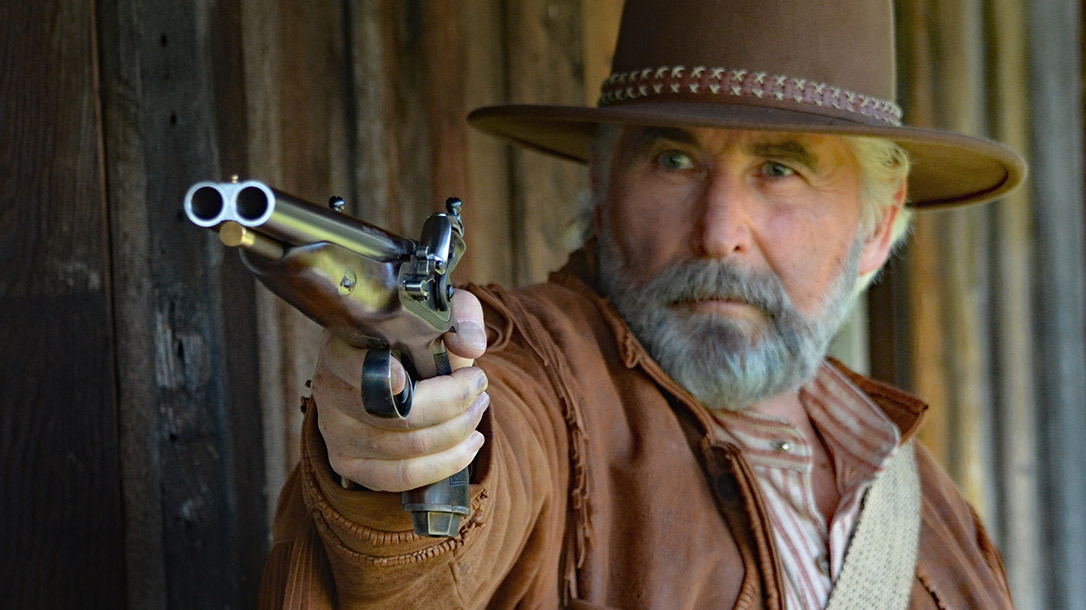 The pepperbox revolver does not have an interesting line. In fact, it looks more like something designed by a committee of steampunk enthusiasts than a real firearm. However, they were the “go-to” guns of the 1830s and 1840s for anyone who wanted a quick follow-up shot or two in a crisis situation. While today they look like interesting toys, people would rely on the Pepperbox pistol to get out of a tight jam.

What’s In A Name

The pepperbox name is due to its shape. It resembled an ordinary pepper mill that everyone had on the kitchen table back home. With multiple barrels that revolved around a central axis, it did look like some kind of grinder.

Of course, when viewed from the front it looks intimidating. Because, the targeted individual suddenly finds himself staring down an assembly of four to six barrels at once. And that is part of the mystique, in my opinion. It is almost beyond belief that this weird looking contraption can go off and actually hit something.

The Pepperbox According to Mark Twain

Of course, this is not the fault of Classic Arms or their replica. The original Ethan Allen revolvers suffered from this same set of problems that face the replica arm today. In fact, in a famous passage, Mark Twain sums up the pepperbox in all its glory. Writing in his travelogue entitled Roughing It, Twain relays the following observations about a Pepperbox pistol in the possession of one of his fellow passengers.

“He wore in his belt an old original ‘Allen’ revolver, such as irreverent people called a ‘pepper-box.’ Simply drawing the trigger back, cocked and fired the pistol. As the trigger came back, the hammer would begin to rise and the barrel to turn over, and presently down would drop the hammer, and away would speed the ball. To aim along the turning barrel and hit the thing aimed at was a feat which was probably never done with an ‘Allen’ in the world. But George’s was a reliable weapon, nevertheless, because, as one of the stage-drivers afterward said, ‘If she didn’t get what she went after, she would fetch something else.’ And so she did.

“She went after a deuce of spades nailed against a tree, once, and fetched a mule standing about thirty yards to the left of it. Bemis did not want the mule; but the owner came out with a double-barreled shotgun and persuaded him to buy it, anyhow. It was a cheerful weapon—the ‘Allen.’ Sometimes all its six barrels would go off at once, and then there was no safe place in all the region round about, but behind it.”

The Pepperbox See Some Updates

The pepperbox pistol as we know it today (percussion and double-action) is first seen in 1830. It was the only choice for a person wanting more than one shot. Many various makers made the pepperbox and—believe it or not—were quite popular. This was before the modern revolver as we know it cast a shadow on it in the 1850s.

The pepperbox arrived just in time to head west with many prospectors during the 1849 California Gold Rush. In fact, most of the period photographs I have seen are miners posing with this firearm shortly before departing for the gold fields of the West.

I carry this wonderful little piece of engineering as my sidearm in a homemade leather holster when I go to fur trade events. My chosen persona is that of a company clerk with a fur trade brigade in the year 1837. I chose the year 1837 as my target date because this is the year that the artist Alfred Jacob Miller attended, and documented, the Rendezvous.

I also have some fur company records from this year, especially the complete inventory for Cabanne’s Trading Post near present day Omaha, Nebraska. The Nebraska State Historical Society has a comprehensive study of the archeology of this site. The 1837 inventory is in the book. It gives me a great guide to look at what was available on the frontier at this time.

In my approach to living history, having the equipment and personal items of the times rounds out one’s impression and makes it more believable. I feel that by learning about the material culture of the times—including the pepperbox—I can give a more accurate portrayal.

By adding this single item to the repertoire of my living history impression, I make it that much more vibrant and alive. I can present myself as a fully developed person and not just a costumed character who happens to be hanging around a historic site. Besides, most modern Americans have no idea that a weapon like this even existed. Much less that it was relatively popular.

The Pepperbox in the West

While Miller did not paint any pepperboxes at the 1837 Rendezvous, he did sketch a number of small percussion firearms. It is not inconceivable to think that a few pepperboxes made their way west. Ceran St. Vrain, mountain man and trader, had a pair of pepperbox pistols with holsters that mounted on the pommel of his saddle. Jim Baker, another mountain man and trapper, is said to have possessed a pepperbox.

Travelers at the Rocky Crossing of the Big Sandy came across a pepperbox revolving pistol. It was on the route taken by pack trains to the rendezvous on the Green River. Two of this gun’s barrels still had rounds in them at the time of recovery.

In 1843, John James Audubon was at Fort Union, a fur trade post in present day North Dakota. He mentioned that the “Booshway” (manager, from the French bourgeois) of the Fort, Alexander Culbertson, had a six-barreled model that he carried with him. So, they do show up in the literature and in the archaeology.

Of course, the range of these little guns is very limited. But many of the fights the mountain men engaged in were at extremely close distances. Adversaries were often within mere feet of one another. The following is a recollection by Osborne Russell in his “Journal of a Trapper” about a fight with the Blackfeet that occurred in 1839.

“The day being very warm, I took a bath in the lake for probably half an hour and returned to camp about 4 o’clock. After eating a few minutes, I arose and kindled a fire, filled my tobacco pipe and sat down to smoke. My comrade whose name was White was still sleeping. Presently I cast my eyes towards the horses, which were feeding in the Valley and discovered the heads of some Indians gliding round within 30 steps of me.

“I jumped to my rifle and aroused White while looking towards my powder horn and bullet pouch. They were already in the hands of an Indian and we were completely surrounded. We cocked our rifles and started through their ranks into the woods, which seemed to be completely filled with Blackfeet who rent the air with their horrid yells.”

Russell continues, “On presenting our rifles they opened a space about 20 feet wide through which we plunged. About the fourth jump an arrow struck White on the right hip joint. I hastily told him to pull it out. As I spoke another arrow struck me in the same place, but the arrows did not retard our progress. At length another arrow striking through my right leg above the knee benumbed the flesh so that I fell with my breast across a log. The Indian who shot me was within eight feet and made a spring towards me with his uplifted battle-axe.

“I made a leap and avoided the blow and kept hopping from log to log through a shower of arrows that flew around us like hail. After we had passed them about ten paces we wheeled about and took aim at them. They then began to dodge behind the trees and shoot their guns. We then ran and hopped about fifty yards further in the logs and bushes and made a stand.”

With action this hot and this close, the pepperbox would have been a useful weapon indeed, as the multiple shots could have kept more of the enemy at bay.

I bought my pepperbox pistol secondhand at a gun show for an almost unbelievably low price. The vendor I purchased it from was almost apologetic that he was selling it. I, however, was very happy. Because, I’ve been looking for one for some time, wanting to integrate it into my fur trade persona. I wanted it for all the reasons he was apologetic for: poor shooter, difficult to aim, and so on. However, I was approaching it as a living history person.

This is exactly what the originals were like, and in using the replica I would have to learn to adjust. Just as our forefathers did when they used the originals. I did not see these qualities as off-putting—instead I found them engaging. Because, I want to learn to do and accomplish things given the same set of tools and circumstances as them.

I feel this approach leads to a better interpretation and understanding of the days this weapon was a viable choice to stake one’s life on.

This article was originally published in the Guns of the Old West Summer 2021 issue. Subscription is available in print and digital editions at OutdoorGroupStore.com. Or call 1-800-284-5668, or email subscriptions@athlonmediagroup.com.