Remington 700 CP: A 6.5 Creedmoor Chassis Pistol With an SBA3 Brace

10
SHARES
1.2k
VIEWS
Share on FacebookShare on Twitter
In 2019, Remington introduced the 700 Chassis Pistol (CP) version of its legendary Model 700 bolt-action rifle. Bolted into an aluminum chassis, the action uses a detachable magazine and is chambered for 5.56mm/.223 Remington, 300 Blackout and .308 Winchester cartridges. But for 2020, Remington has decided to offer the 700 CP in the popular 6.5 Creedmoor. Big Green has also made the 700 CP available with an SB Tactical arm brace, which makes the pistol even easier to shoot. 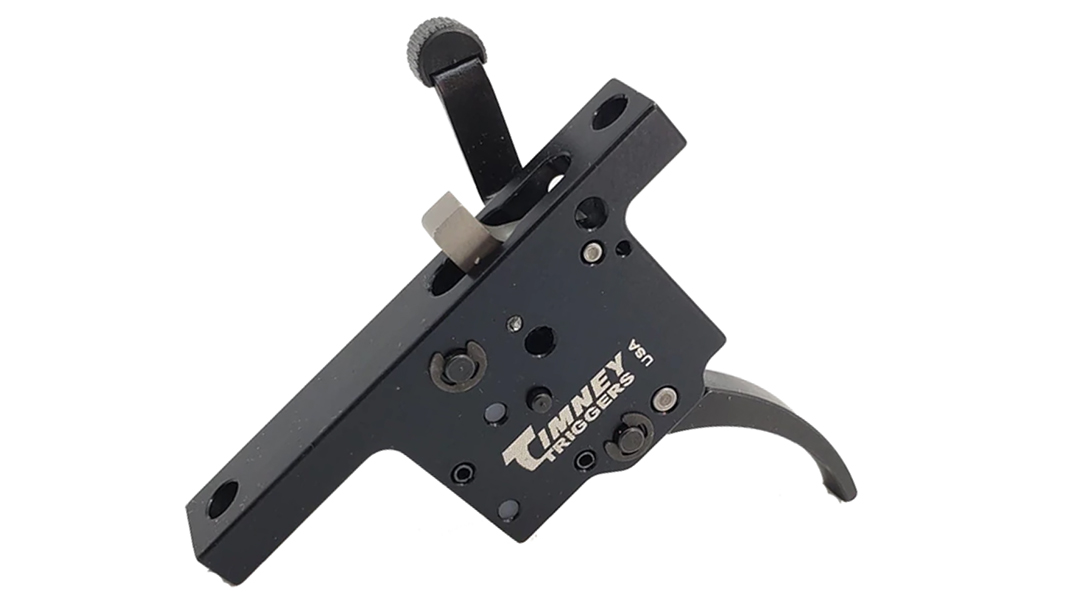 I first laid eyes on the new gun at the 2019 Athlon Outdoors Rendezvous in Driggs, Idaho, where dozens of gun manufacturers, including Remington, brought along a number of products that had not yet been introduced to the public. Among them was the 700 CP in 6.5 Creedmoor with the SB Tactical arm brace. There, I had a chance to speak with Remington’s Eric Suarez about the new pistol.

“First off, this is a standard Remington 700 short action with its three rings of steel strength,” Suarez said. “We don’t do anything to modify the action of the CP models. For this gun, we use the same aluminum chassis as the Remington Precision Chassis Rifle [PCR], and it comes with an extended 0-MOA rail, which is important because it allows forward mounting of optics. The free-floating, M-LOK handguard has no accuracy-robbing contact with the barrel. We use the Remington X-Mark Pro trigger, and it’s adjustable from 3.5 to 5.5 pounds. There’s also no need to remove the barreled action from the chassis to make adjustments because the engagement screw is readily accessible. Each model also come with an oversized bolt knob that makes cycling the action sure and easy, as well as a single-column Magpul AICS magazine.”

I sat down at the bench and engaged a number of distant targets that Suarez pointed out to me while supplying the correct holdovers to make hits. The found the pistol amazing. The oversized bolt knob made manipulations quick and certain, and the SB Tactical arm brace added another point of contact to the pistol that aided in shooting it consistently.

Suarez’s enthusiasm was contagious, and I placed an order for one of the pistols. Also at the Rendezvous was Riton Optics, a veteran-owned company located in my hometown of Tucson. Riton’s marketing manager, Tony Tarantino, is an industry veteran and an old friend of mine. When I told him I was going to review the new Remington 700 CP, he said Riton had the perfect scope for this gun: the 1-8x24mm X3 Tactix.

When the Remington 700 CP arrived, I gave it a quick once over and was impressed with the pistol’s design. Like Suarez had said, the 700 CP’s push-feed action is all Remington. Accompanying the pistol was a single-stack, 10-round Magpul magazine. Remington chose this magazine as it negated the need to redesign the bolt to feed from AR-10-style, double-column magazines. The magazine release lever is conveniently located so that it can be engaged when the shooter grabs the magazine to remove it. 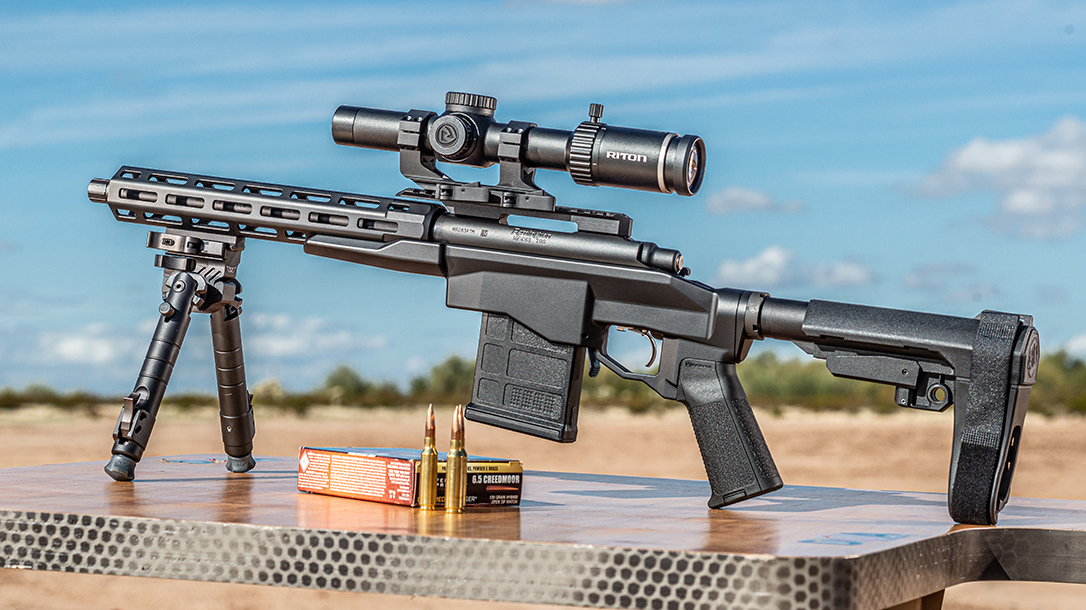 As mentioned, Remington outfits the 700 CP with an M-LOK handguard that is attached to the chassis and has no contact with the barrel, which could affect accuracy. On top of the receiver is an extended, 0-MOA Picatinny rail for optics. It’s attached to the receiver with four screws. Out front, the 12.5-inch barrel’s muzzle has 5/8×24-tpi threading for suppressors or muzzle brakes, and Remington supplies a machined thread protector.

Out of the box, my test sample also had a 4.5-pound trigger. The Remington X-Mark Pro trigger is adjustable for engagement without removing it from the chassis, though it wouldn’t be a big chore if need be. I adjusted the engagement screw until the trigger pull weighed about 3.75 pounds.

At the rear of the 700 CP’s aluminum chassis is an adapter for an AR-style receiver extension, or buffer tube. Here Remington has attached an SB Tactical SBA3 arm brace that can be adjusted to five different length-of-pull positons, including fully collapsed and fully extended. Currently, the BATFE holds that it is legal to shoulder such designs, increasing your hit probability and accuracy.

Finally, on my way to shoot the 700 CP, I stopped at Riton’s office and picked up one of the company’s new 1-8x24mm X3 Tactix scopes. This variable scope features an illuminated, second-focal-plane reticle; an integrated, but removable, throw lever; and a fast-focus eyepiece. One of Riton’s technicians had the scope installed in a Riton one-piece mount with quick-detach levers. The scope weighs just 19 ounces, or 26 ounces including the mount.

When I arrived at my shooting spot southeast of Tucson, I set up my DOA Shooting Bench and quickly attached the scope. I set a target 25 yards away and zeroed the scope while chronographing the ammunition I had brought along. By the time I had chronographed the five different loads, I had the rifle zeroed and pushed my target back to 100 yards.

Instead of using a rifle rest, I attached a short Picatinny rail to the bottom of the 700 CP’s handguard and attached a Warne Skyline bipod. It features a quick-attach lever, and the legs can be adjusted from 6.9 to 9.1 inches long. You can also adjust the cant by 22 degrees and pan by 44 degrees. After finding the ideal leg height to comfortably shoot the 700 CP, I disabled the pan feature and fired my groups. I fired five groups with each load and included the best five-shot groups in the performance table.

The 700 CP is not a particularly hard gun to shoot, and I was able to develop some technique as I put rounds downrange. I fired groups using my support hand to push the SBA3 brace into my shoulder. My first shot was literally an eye-opener, as I saw a white flash through the scope when I pulled the trigger. The short barrel creates quite a fireball as unburned powder continues to burn after leaving the barrel—so much so, in fact, that if it had been fire season, I would have discontinued shooting the gun for fear of igniting some dry buffalo grass.

I was able to use the scope’s fast-focus eyepiece to get an incredibly sharp, clear sight picture. Using 2-inch diameter Shoot N C targets, I was able to center the 1-MOA dot reticle easily, and this made shooting tiny groups simple! Also aiding my groups was the gun’s crisp trigger.

My best group came with Federal’s 130-grain Gold Medal Berger rounds; I managed to put five shots into a neat cluster measuring just 0.85 inches wide. During my shooting session, I fired more than 150 rounds, and that was a little much for a single day. By the end of my session, I was jittery as I broke the shot, in anticipation of recoil, and my shoulder remained sore for several days. The SBA3 arm brace is made of a rubbery composite material that acts as a sort of recoil pad. But 150 rounds is just too much in a single session for a lightweight like myself. The only negative that I found to this setup is that it is impossible to obtain a cheekweld. Despite this, the gun performed admirably in terms of accuracy. Quite frankly, these groups were much tighter than I had anticipated.

I looked back through my notes to find another gun that I had fired the same rounds through with a true rifle-length barrel. Last year, I tested the RISE Armament 1121XR rifle with a 22-inch barrel using the same ammunition. The Remington 700 CP’s 12.5-inch barrel had 20-percent less velocity with the same rounds. Unfortunately, this translates into 32-percent less energy. The Remington 700 CP is a short-range gun, and there’s no sense in trying to push its range. Keep your shots under 200 yards and you should be fine. It’s not that the shorter barrel is mechanically less accurate, but the reduced velocity decreases the distance at which the projectile stays stabilized.

Remington’s Suarez explained to me that the 700 CP was designed for several different groups of people. “For me personally, I have two young boys, and the adjustable SB Tactical brace fits them better than a full-stocked Remington 700,” he said. “People with disabilities or an injury that has affected their limbs and/or range of motion may find that the shorter overall length and lighter weight allows them to hunt again, whereas a full-sized rifle might just be too hard. Folks hunting out of deer blinds have limited room, and shots are usually limited to 150 yards. That’s where the Remington 700 Chassis Pistol excels!”

While I was shooting the 700 CP, a local rancher and a Bureau of Land Management agent stopped to say hello. They were both impressed with the compactness of the gun. Both spend a great deal of time in their vehicles. They each believed that the short length would make it much easier to get the gun into action quickly. The 700 CP’s accuracy with a full-powered cartridge also impressed. After they had a chance to shoot the 700 CP, I am certain that Remington will have two new customers.

With the SB Tactical brace, Remington’s 700 CP makes for a very compact package that is capable of rifle-like accuracy. If your needs require a short, compact gun chambered for a serious cartridge like the 6.5 Creedmoor, the Remington 700 Chassis Pistol just might be the gun for you. For more information, visit remington.com and ritonoptics.com.

Bullet weight measured in grains; velocity in fps by chronograph; and accuracy in inches for best five-shot groups at 100 yards.

This article is from the March 2020 issue of Tactical Life magazine. Grab your copy at OutdoorGroupStore.com. For digital editions, visit Amazon.