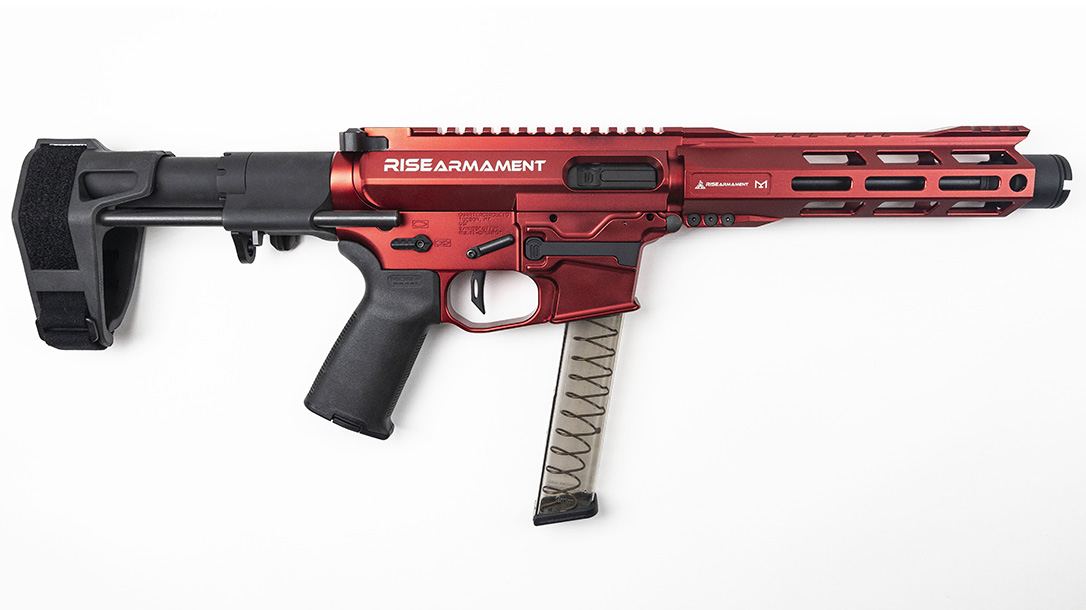 If tomorrow someone asked me what type of gun I most enjoy shooting, I wouldn’t even have to think about it. It has to be 9mm ARs. I love them. They barely recoil. They’re super easy to aim, cheap to shoot and easily accessorized. They can run sound suppressors and optics. They’re all fun, all the time. 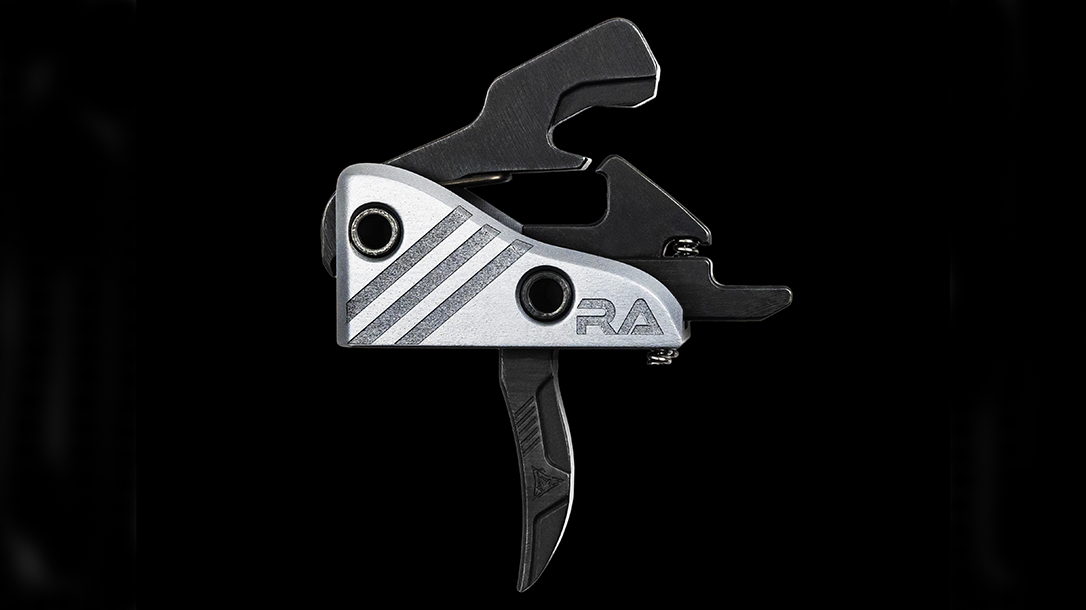 I’ve also noticed that I am clearly not the only one who feels this way. The market has exploded over the last few years with 9mm ARs for competition, home defense and simply fun on the range. I have been building and shooting different models for duty and entertainment for more than 20 years, and I can’t remember ever shooting a reliable 9mm AR and not walking away giggling or raving about it.

At the 2018 Athlon Outdoors Rendezvous, I was introduced to Rise Armament’s new 9mm AR carbine—and I’m still grinning! That particular test sample had a great trigger and accepted Glock magazines. On top of that, the bolt locked back after firing the last round. What’s not to love?

Rise’s marketing director, Camille Torres, told me about the company based in Broken Arrow, Okla., before showing me some of the features on the AR9, which I quickly realized had all the bells and whistles for such a little 9mm carbine. Torres told me she would send one my way as soon as they had perfected everything, right down to the color.

A few weeks later, Torres told me she had a pistol version available in “Rise Red.” It sounded sporty—who doesn’t love a candy-apple red Corvette? When I picked it up from Dave Roan at Beartooth Guns in Billings, Montana, his first comment was, “I don’t like brightly colored guns, but man, that thing looks sharp!”

I popped the case open, and there sat a 9mm racecar in a foam-lined case. It looked smooth, proud and fast. I knew this was going to be a fun review. With a pistol stabilizing brace and a 7.5-inch barrel, the AR9 looked like it was built for speed. 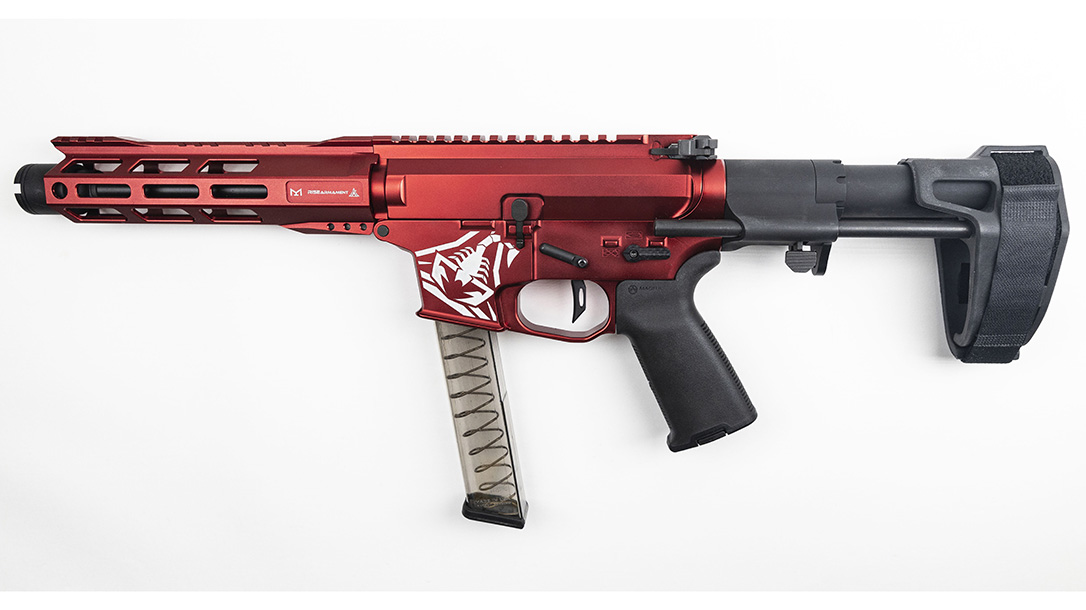 Rise Armament plans on offering a few different versions of the AR9. The Flash Series models are available in four colors: Rise Red, Patriot Blue, Viking Iron and Spartan Bronze. Then you have the Grit Series with black, Flat Dark Earth and olive drab models. Either way, you can choose between a 7.5-, 10.5- or 16.1-inch barrel.

As I mentioned, I obtained a Rise Red model with the shortest barrel option, and my favorite feature comes standard on every Flash Series AR9: The RA-535 Advanced Performance Trigger. This single-stage unit is extremely crisp with virtually no overtravel and a super-short reset. Grit Series guns come with the RA-140 trigger, which is more of a tactical or home-defense design that isn’t built specifically for blowing the doors off the competition at the range like the RA-535. However, both are rated for 3.5-pound pull weights, and I think my test model’s will lighten up even more with use.

The AR9 also comes with KNS anti-walk trigger pins, which I would normally consider overkill, but they’re a great idea for a 9mm AR that runs on a straight-blowback operating system. These guns tend to break trigger and hammer pins and elongate the lower receiver holes due to the violent recoil of the bolt. The locking lugs on direct-impingement guns give the pressure a chance to subside before the bolt comes back. That isn’t the case with a straight-blowback setup. Thus, having the external braces between the pins gives them a lot of added strength and saves wear and tear on your lower receiver.

Out front, the free-floating barrel wears a KAK Flash Can on 1/2×28-tpi threading. The barrel and gas system are nested inside Rise’s RA-905 handguard, which has six sling-mounting points, several M-LOK slots for accessories and a short rail near the muzzle for a front sight. Normally, with more tactical guns, I’d prefer a full Picatinny rail on top so I could mount backup iron sights, a red-dot sight and a magnifier (and occasionally a PEQ-15 for night ops), but for a 9mm race gun, I only wanted a red-dot sight. If the competition did not allow optics, I could clamp on some iron sights and go.

Another thing I like a lot is the AR9’s short-throw safety selector. The 90-degree selectors found on many guns are easy to flip to fire, but many shooters have to break their grip to get their thumb behind them and flip them back on safe. I switched over to 45- and 60-degree safety selectors years ago and couldn’t be happier. The RA-212 charging handle, with its extended latch, was also easy to work by simply sweeping my support hand back to work the bolt and charge the weapon.

The one disappointment I found was the arm brace. The 7.5- and 10.5-inch-barreled AR9s come with three-position SB Tactical SBPDW arms braces. On my test gun, the SBPDW worked and felt great in the extended position, but fully collapsed, the two rods come forward and make it difficult to disengage the safety. Most shooters might not notice this, but coming from a tactical background, I rest my thumb on the safety selector whenever the weapon is in my hands. However, it’s only an issue when the brace is fully collapsed, and I probably won’t carry the gun that way anyway. I would only collapse the brace that far to throw the AR9 in a backpack or small case. The 16-inch-barreled version of the AR9 comes with a Magpul CTR stock, and every model comes with a Magpul MOE+ pistol grip.

Finally, the case itself is pretty cool. The foam was custom-cut to match the pistol and certain areas could be removed to accommodate mounted optics as well as cleaning kits, magazines, etc. On that note, Torres also included a translucent 31-round ETS Group magazine with my test sample to complete the package and make sure I had plenty of firepower on tap.

After breaking the pistol down and oiling the bolt, I attached my Steiner 3-15x50mm M5Xi scope with a G2B mil-dot reticle to the gun’s top rail and set up targets 50 yards away. The AR9 looked a little out of place smooshed between my Champion shooting bag and such a big tactical scope. I believe in putting good glass on all of my test guns and using a solid rest to make sure I get the best results possible. 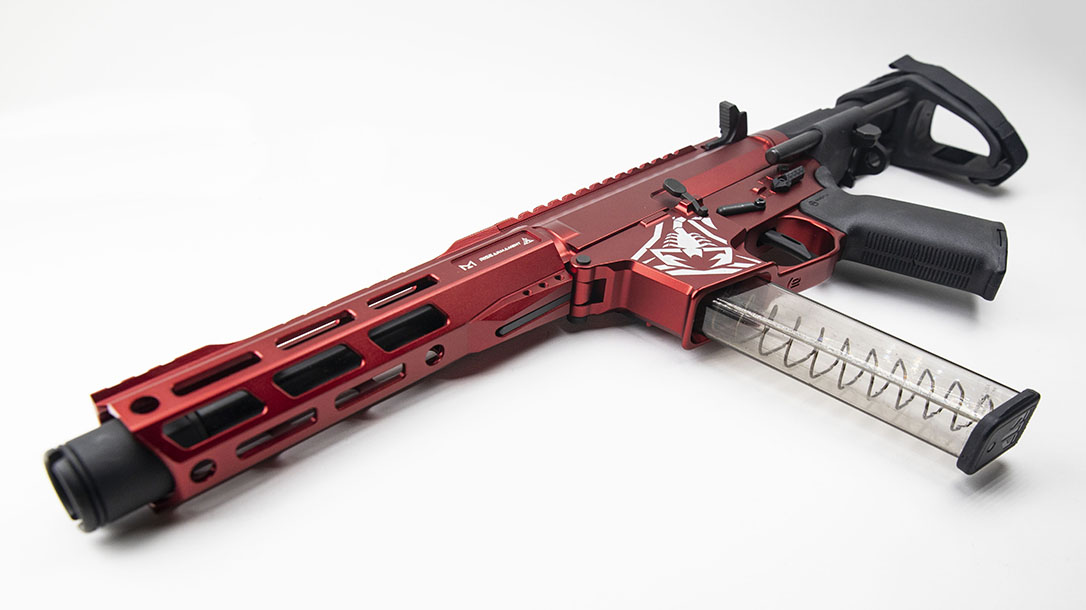 After achieving some tight five-shot groups, it was time to play. The Steiner went back in its box, and I clamped on a little Aimpoint CompM3 that I still love for its size, dependability and clarity. I had it zeroed two minutes later, and then the fun began. I loaded up a bunch of Glock 9mm magazines along with the 31-round ETS Group magazine. And every single load and magazine I tested ran flawlessly. Old 32-round Glock mags, new Glock mags, 17-round mags, 19-round mags and the ETS Group mag. I’ll admit that watching the magazine spring compress while loading the translucent ETS Group mag was strangely fascinating.

I set up a couple of target backers with Shoot-N-C targets. Shooting around barrels proved easy, as did some pivot and speed drills. My old Competitive Edge Dynamics CED8000 timer showed 0.2-second splits on a 6-inch target at 10 yards. I got five rounds on target in just 1 second. This little red gun was indeed a racer. I don’t normally have such quick split times, so all kudos go to the gun.

As a gun writer, it isn’t every day that I get to test-drive a racecar. However, there are few other things that compare to the Rise Armament AR9. In terms of looks and performance, the resemblance holds true. Sure, it looks great sitting in the driveway, but take it to the track and watch it really shine. The AR9 will be available by special order only: You pick the model (Flash or Grit), color and barrel length. Then strap in and hold on. For more information, visit risearmament.com.

Bullet weight measured in grains; velocity in fps by chronograph; and accuracy in inches for best five-shot groups at 50 yards. 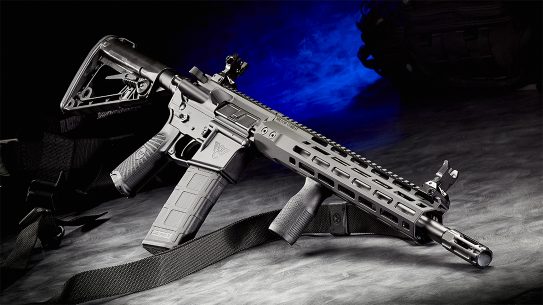