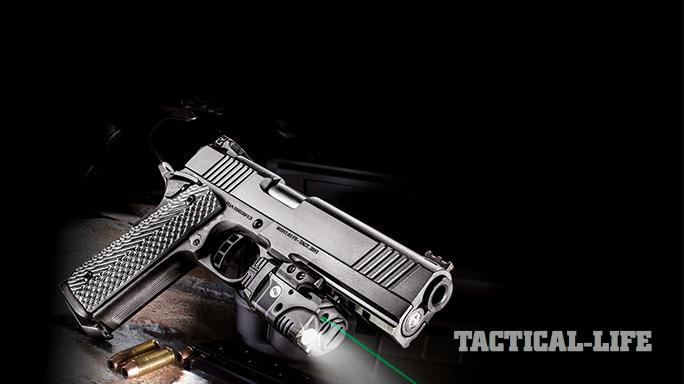 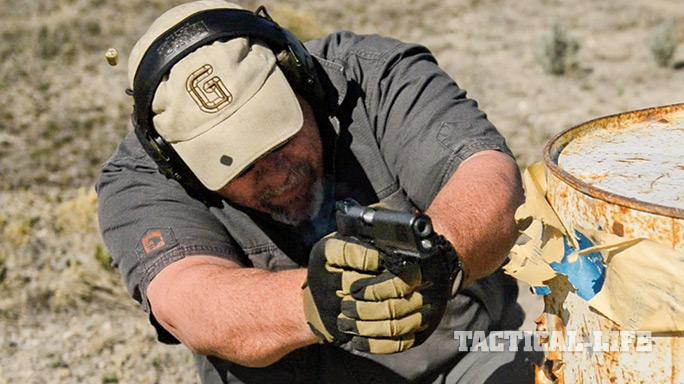 2 of 4
Rock Island Armory TAC Ultra FS
The TAC Ultra FS’ fiber-optic front sight made aiming in close quarters and on the move a breeze. 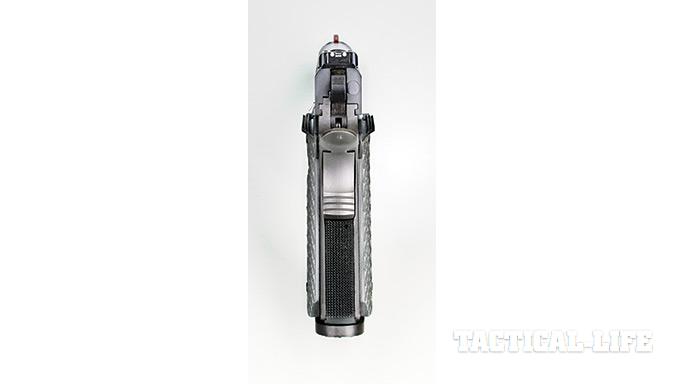 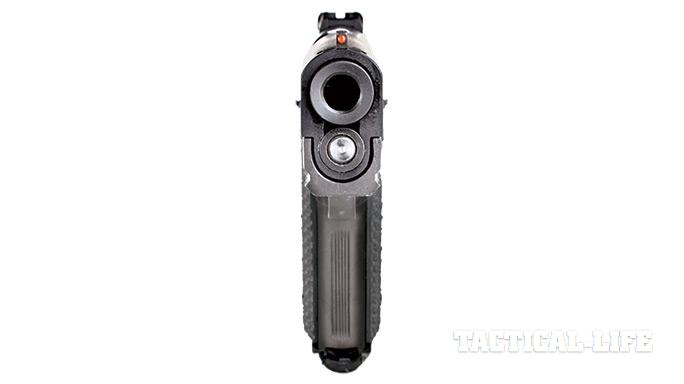 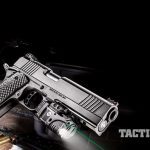 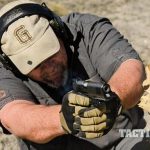 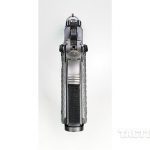 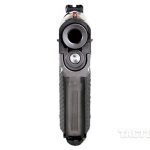 Increased demand and lower prices have brought the venerable 1911 design to a growing number of new shooters each year. Entry-level models once starting closer to $900 now come in closer to $500, which is similar to developments in today’s polymer pistol market. Changes in materials and machining have made 1911-style pistols more reliable and better equipped than ever. American-made 1911s can be well priced but it’s the imports that have really broadened the market. Rock Island Armory is one of the best of these manufacturers, and it is developing a very strong reputation among shooters.

Contrary to much of the commentary seen on social media, there is far more to gun ownership than simple “practicality.” At the top of the list is pure enjoyment—it is supposed to be fun. A big part of that fun is accessorizing and personalizing your chosen firearm. Many of the more popular polymer-framed pistols make this pretty simple. If you want to do that to your 1911, however, it may require a gunsmith.

When these pistols started close to a grand, customization was impossible for most. Now, with 1911s starting at around $500, it is possible for even first-time owners to add sights, change grip panels, safeties and other accessories. It really has opened the door for many who have always wanted to own a 1911. If you spend any time on the 1911-specific forums and groups online, you’ll see Rock Island’s 1911 pistols tricked out right and left with great results. As a long-time tinkerer and 1911 aficionado, it is fantastic to see this design making a return to the masses, and Rock Island Armory is a large part of it.

While most people all but automatically equate the 1911 with .45 ACP, that has never been the only chambering offered. Over the years, this type of pistol has been chambered in 9mm, .38 Super and even .38 Special, along with several other calibers. Pistols in 9mm are quickly becoming favorites on the market, though some want more power, and the 10mm satisfies that need.

One of the most versatile pistol cartridges available, the 10mm cartridge can be loaded from pretty comfortable to downright wrist shattering! Offering several bullet weights from 125 to 200 grains and velocities close to 1,700 feet per second (fps), it allows for self-defense, duty use and even hunting with one pistol. Other pistols use the 10mm, but the 1911 remains a favorite platform for the cartridge.

As a full-sized pistol, the RIA TAC Ultra FS 10mm is set up to take advantage of this fantastic round, and the street price of around $600 makes it even better.

Arriving with three 8-round magazines in a nice hard case, the TAC FS 10mm is an all-steel, full-framed 1911 with a full-length dust cover and an accessory rail. Rack the slide and it is smooth and tight. Serrations are cut into the frontstrap while a checkered steel mainspring housing provides a solid grip. G10 grip panels are aggressive, but I found them about perfect for a tactical pistol or one where gloves may be used. A high-cut beavertail and grip safety allow for a comfortable, high grip.

The pistol’s white-dot rear sight is adjustable while a fiber-optic unit sits up front. The fully supported bull barrel and full-length guide rod facilitate full-power loads. The gun’s trigger has the correct take-up, breaks at about 5 pounds and has just a tad of overtravel, which is about the norm for a stock pistol. The safeties are ambidextrous, while the magazine safety is slightly extended. Checkering also appears on the slide stop.

A smooth Parkerizing appears throughout with a pretty solid fit. There’s no rattle in the grip safety. Cocking serrations at both the front and back are evenly cut and the same size. Upon closing the slide, it locks nicely into place, engaging the safety; there is no movement. Both safeties were a bit sharp to suit me, as I would like to see them rounded a bit more. The G10 grip is also pretty sharp, but that’s the way many like it. The pistol locks nicely into place while shooting with gloves on.

Lasers are becoming very popular, so a Crimson Trace Rail Master Pro Universal Green Laser Sight was attached for most of the testing. Being relatively small, it was easy to fit to the rail using the supplied plates. Situated for easy access with either hand, the laser fit snugly and did not move during testing. Having used green lasers at last year’s Crimson Trace Midnight 3-Gun event, I’ve found that they are a nice addition to any handgun. Green lasers tend to be much easier to see during the day as well, making them more versatile.

Accuracy testing proved impressive, especially with Barnes’ new 155-grain TAC-XP hollow points. Having used it in .40 S&W for years, this cartridge has proven to be an excellent self-defense projectile. It being loaded to velocities approaching 1,200 feet per second (fps) only makes it better. Barnes now offers its TAC-XP in its VOR-TX line of ammunition. Offered in numerous pistol and rifle loads, the TAC-XP is becoming one of the most popular self-defense rounds available. It expands in tissue, performs incredibly well through barriers and is consistently accurate.

During a recent trip to Gunsite, this load was demonstrated in gel and consistently penetrated from 13 to 15 inches no matter the media, making it one of the most consistent 10mm loads tested. Accuracy out of my custom Delta is stellar, typically holding inside 2 inches on the same off-hand hold out to 25 yards.

Reliability testing consisted of a healthy diet of HPR’s new HyperClean 180-grain full metal jacket (FMJ) and a smattering of Federal American Eagle and Speer’s aluminum-cased 200-grain cartridges. Several rounds of my hand-loads designed to match the Barnes were also tested. All of the factory loads were stout but controllable. My handloads using 155-grain jacketed bullets were downright pleasant, matching the Barnes ammunition.

Three 8-round magazines were provided and worked well. My Tripp mags and a few Wilson Combat magazines also ran fine. The only issue that arose was one typical of stock 10mm pistols. The part of the slide stop the empty magazine pushes up on extended just a bit too far into the lower, causing the slide to lock open mid magazine. Longer loads or different bullets will contact the slide stop on the way up. It was only occasional while using the self-defense loads, but more frequent with the practice loads. There’s an easy fix to this issue, however: Either file a bit off the slide stop or install a different one. Once fixed, the TAC Ultra FS ran without a hitch on everything from slow fire to double-taps, triple-taps and quick strings of fire. It locked open on all of the magazines, which is rare for a 10mm 1911. The mag well is also beveled, which helped make magazine swaps fast and precise. None of the pistol’s parts shook loose during testing, even with some pretty stout loads.

Using the Crimson Trace Rail Master Pro allowed for some pretty impressive groups at the 7- to 10-yard line. By following the first round and placing the laser on the same spot, it cut one ever-larger hole in the target. Anything beyond 10 yards in the direct sun made it harder to find, but it was still much better than any red laser I’ve used. The laser unit did not come loose during training, and the battery lasted all day. The unit is pretty easy to operate with a simple push of the button on either side of the laser. Working out of my Safariland SLS holster, it fit well and presented to target quickly. Using my lighter loads, it was accurate, fast and a ton of fun.

Many 1911 fans will like the full-length dust cover, especially considering the pistol’s 10mm chambering. Adding a bit of weight only makes it a bit softer and allows for mounting all kinds of accessories. My first rail-equipped 1911 used the same configuration. That same pistol also served as my first tinkering platform. Acquired at a reasonable cost, it was my first venture into fitting safeties, internal parts and sparking an interest that still exists to this day.

The TAC Ultra FS does require a holster sized for an STI or Springfield Operator, however, and not just any railed holster will work. These can be found pretty easily and will accommodate a light and the laser unit if need be.

As my first test of an imported 1911 in quite some time, the TAC Ultra FS was pretty impressive. This pistol was well made, and it makes clear why the brand is so popular. Rock Island Armory offers several tactical 1911 configurations—some of them are very well equipped and all of them are moderately priced and accessible to even the first-time gun buyer.

Short of the slide-stop issue, something seen on 10mm 1911s twice the cost, the TAC Ultra FS ran like a champ, was accurate and was a blast to shoot. If you want to get into the 1911 platform in 10mm, this is a good start whether it’s as a base for accessorizing or if you’re looking for your new favorite 1911 in a versatile cartridge. 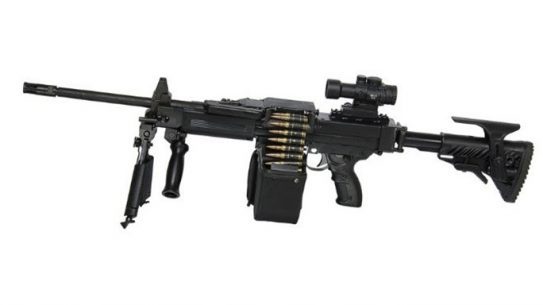 Texas Firearms Festival: IWI US To Go Full-Auto (and Semi)