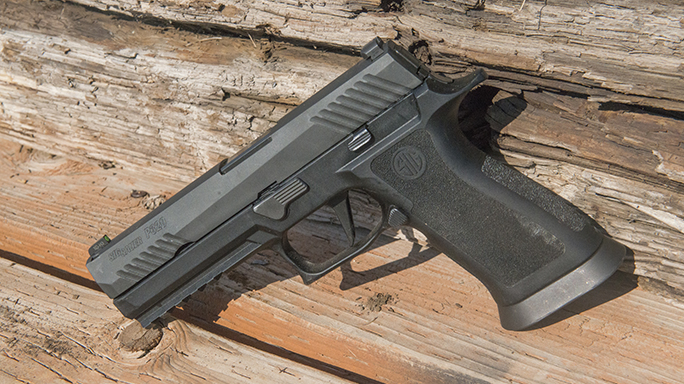 1 of 6
Is the Sig P320 Pistol Worthy of All the Hype?
The Sig P320 is truly modular, with a good trigger minus a trigger-mounted drop safety along with the required thumb safety. 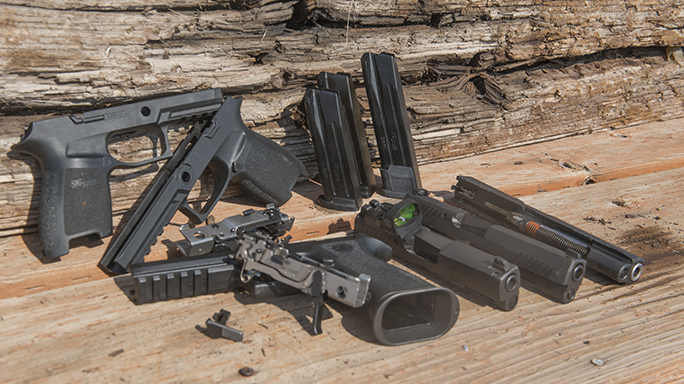 2 of 6
Is the Sig P320 Pistol Worthy of All the Hype?
There is simply no question the Sig P320 is modular, and that was a huge part of the contract. 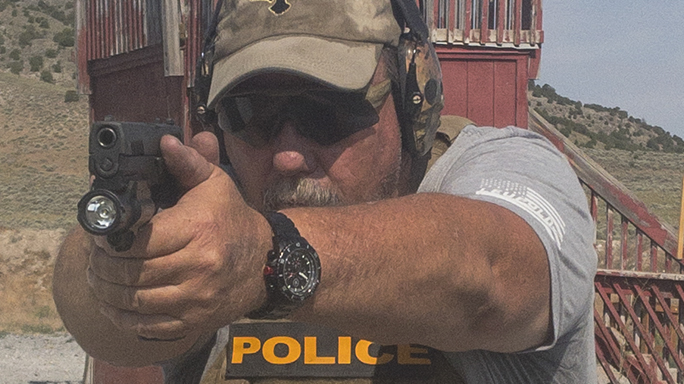 3 of 6
Is the Sig P320 Pistol Worthy of All the Hype?
Testing the Sig P320 since its introduction — more than at least 10,000 rounds in one pistol alone — it is plenty reliable and very accurate. 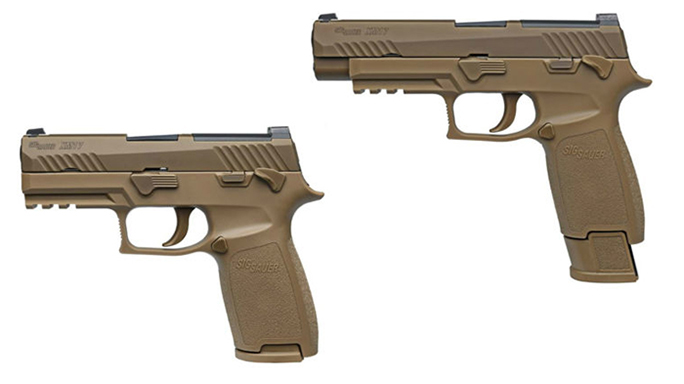 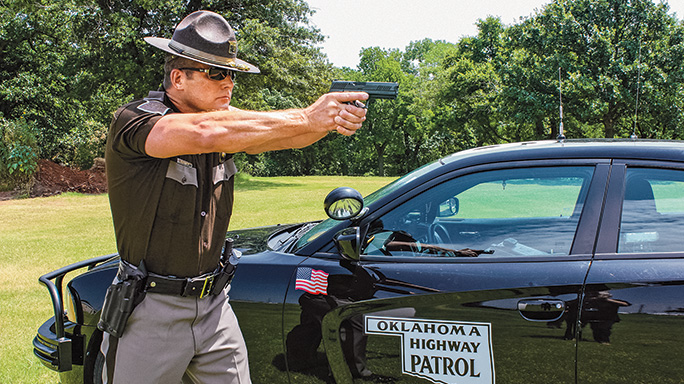 6 of 6
Sig Sauer P320: A ‘Shape Shifting’ 9mm Pistol
The Oklahoma Highway Patrol has a long history with Sig Sauer. The new 9mm P320, with its light recoil and fast handling characteristics, is replacing the agency’s older .357 SIG P226 pistols. 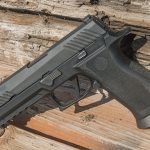 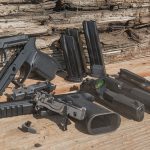 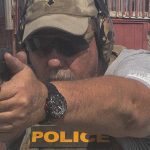 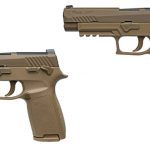 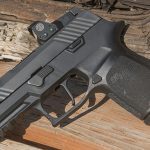 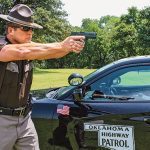 This article on the Sig P320 was written by Lieutenant Dave Bahde (retired), who has been a professional firearms instructor and consultant for more than two decades. He has assisted tactical teams and police departments in firearms selection, implementation and deployment.

Ever since Sig Sauer won the U.S. Army’s MHS (Modular Handgun System) contract with a version of the Sig P320, the detractors have emerged from the woodwork like insects in a dark kitchen.

Anything but new, it’s a part of the process. Every time a large government contract is awarded this happens. Cries of favoritism, irregularities in testing, bias, you name it. Losers question the process, while fanatics denigrate the winner espousing the benefits of their choice. You would think it was a football game, not a pistol contract. There is just no way their product could have lost, the fix must be in.

The XM17/18 project is no exception — for those who lost there is just no way the Sig P320 “is that good,” is it? Police agencies are lining up to transition to the P320, and even in this slow market Sig Sauer is doing all they can to keep up with demand. Maybe, just maybe, it is that good.

Before we get into the pluses and minuses of the Sig P320, let’s take a look at why police agencies buy items issued on large government contracts. Police agencies have been doing this for at least the three-plus decades I have been involved in law enforcement, my guess much longer.

Anything that is purchased by a federal agency, DOD or similar, will be high on the list of any police agency looking to purchase. I have seen it with pistols, rifles, body armor, ammunition, even computers and vehicles. Is it always the “best” choice? Absolutely not. It can be, but more often than not, it is some sort of compromise — another reality in government work.

Liability drives everything a police agency does — sucks, but that’s life. Anything an agency (especially a small one) can do to mitigate liability, they will. Using the ammunition or pistol the FBI, DOD, U.S. Army, or any other entity has chosen is a no-brainer. Especially true if there is a need for extensive testing that most agencies have neither the resources, manpower, or money to undertake. Basically, if it’s good enough for the Army, it’s good enough for us. Not something every agency does, but many do and always will.

Purchasing items awarded a government contract is easier and cheaper. In most cases police agencies are given GSA pricing, close to that awarded in the contract on similarly configured items. It may not be “exactly” the item in the contract, but it may be close. Agencies have been buying less than stellar ammunition for decades for no reason other than it’s on the “state contract” with a huge discount. Best practice? Maybe. Maybe not. But it’s reality and will not change in my lifetime.

Manufacturers will often use that contract award as a means to target agencies looking to transition and offer them fantastic deals. Every major manufacturer/supplier of pistols to police agencies has done that including the ones crying the loudest after losing the MHS contract. It’s just how the game is played.

Buying the “latest, greatest” pistol is fine if it’s all you have. Buying anywhere from 100 to 10,000 or more is different. Consider an agency with anywhere between 10,000 and 30,000 officers. A weapon being supplied to the Army with its commensurate support is another no-brainer. At that size you must have a company that supports you with production and infrastructure to match.

As a small agency, you have some assurance that support agencies that size can take care of you. Really, it boils down to simple logistics and straight up customer service. It’s not uncommon for those having lived off their previous success to forget that.

Support in terms of armorer’s classes, spare parts, basic customer service is critical. Agencies are thinking 10 years out, not just this year. Having repaired and serviced sub-machine guns and rifles that required an act of congress to get parts, you get to the point you just don’t care how “perfect” something is.

Unlike much of the “industry,” when the MHS contract was released my first thought was, “Well, that’s a P320 contract.” Seems I was right, but why? Maybe the most important factor being its modularity.

The final product Sig Sauer won with is the same base grip frame with one trigger housing and different slides. All that’s needed to go from full sized slide to carry is swapping slides. Want to turn it into an RDS (Red Dot Sight) equipped pistol? The XM17 and XM18 are both cut to use one. Turn it into a compact with the same serialized module in minutes.

There is simply no question the Sig P320 is modular, and that was a huge part of the contract.

I have a bag of P320 grip frames, slides, and magazines. In one day I tested what amounted to four different pistols. Adding a couple more slides and grip frames made it possible to replicate every pistol offered in the commercial market in three different calibers. If the magazine will insert into the fame and reach the catch, it will work.

Carry your small pistol with a 21-round magazine as a backup. Carry two pistols and the magazines all interchange. For the everyday consumer that may not be a big deal, but it’s huge to the department armorer, for no other reason then you can track one serial numbered pistol throughout an officer’s entire career. All that is needed for an assignment change is five minutes and some parts. It may not be something Sig Sauer invented, but they have done the best job of making it real to date.

The Sig P320 is a great pistol. Was it birthed from the heavens, perfect in every way? Of course not. Nothing out there is and never has been, but the P320 is a solid pistol.

Most criticism these days of firearms is as hormonal as practical, more about brand loyalty or social media mania than reality. Testing them since their introduction — more than at least 10,000 rounds in one pistol alone — they are plenty reliable and very accurate. Bore to grip height is a bit high, but the pistol remains very soft to shoot and control.

Another plus is the lack of a drop safety in the trigger. It remains the most annoying part of other polymer striker fired pistols. Sig Sauer managed to get the P320 to pass the drop test without one, and that’s a plus for many. It’s just one less thing in the mix for me and the result is a nice trigger — one of the best out there out of the box.

Stacking is minimal without the crunch common in so many others. Perfect? No, but very good. Move to the X-5 models and it is as good as it gets from a factory striker fired pistol.

Grip frame is just that — an entire frame and not just a strap. Grip straps are okay, but in many cases the difference between small and large is all but non-existent. With the Sig P320, the entire grip is shaped smaller or larger. For an agency, or someone like me with large hands, it is a game changer. It is equally as helpful having fit clients with small hands using the small frame. Being able to do it in the field with no tools is fantastic.

With a retail price of $44, you can change shapes and colors for the cost of shipping to get your frame on other pistols shrunk or coated. Want to try your hand at stippling? You are out $50 and there was no need to use an FFL to get it or destroy it. Just chuck it in the round file.

It’s a simple thing, but there is no need to press the trigger to remove the slide. Make sure it’s empty, lock the slide to the rear, move the slide locking lever forward and off it comes. Reverse for the new slide.

I get it, just engage your brain when cleaning your pistol. However, the fact remains that next to shooting yourself in the leg when holstering, it’s the most common negligent discharge resulting in injury with a striker fired pistol. Removing that step is big when you are teaching new recruits.

Sights sit kind of low — it’s something Sig Sauer has done for years — but using a standard Sig cut means there are tons of choices from every mainstream sight manufacturer out there. Tritium, big dot, little dot, red, green, tall, small, thin, wide, fiber optic — you name it and there is a sight set that will fit. No need for a proprietary sight and the wait that comes with it. Just another small thing for some, bigger for others. As an agency, it is just one more support issue in Sig’s favor.

In my opinion, Sig Sauer won that MHS contract primarily because the company gave the Army what it wanted, not what it thought it should have. The Sig P320 is truly modular, with a good trigger minus a trigger-mounted drop safety along with the required thumb safety. The only contender tested so far that was close to the P320 is the Beretta APX, another great pistol with the potential at least to be almost as modular

Internals on the Sig P320 are metal, including the trigger. Rather than simply adding or removing a strap, the grips are really different and can fit lots of different hands. It even offers the ability to change calibers if needed. The contract was for a Modular Handgun System, not a cool pistol, and that is exactly what Sig provides with its P320.

We live in a society where its more popular to bash everyone or everything else than compliment those who succeed. Admitting we lost is no longer an option, its more popular to blame everyone and everything else and Sig is suffering some of that with this contract. The difference is they are smiling all the way to the bank with the $580 million dollar contract and all the benefits that come with it. I think they call that “winning!” 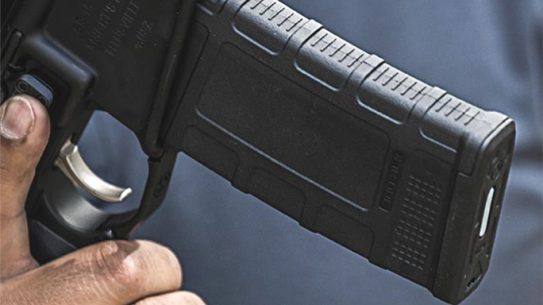 VIDEO: Magpul Is Now Shipping Out a Dedicated 300 BLK PMAG