Why Agencies Allowing 1911s Should Look at the Springfield TRP 10mm

When the FBI picked Springfield Armory‘s Professional model for its Hostage Rescue Team (HRT) and later SWAT teams, many wanted a similar pistol at a lower price. So, Springfield launched the Tactical Response Pistol (TRP) in 2001. 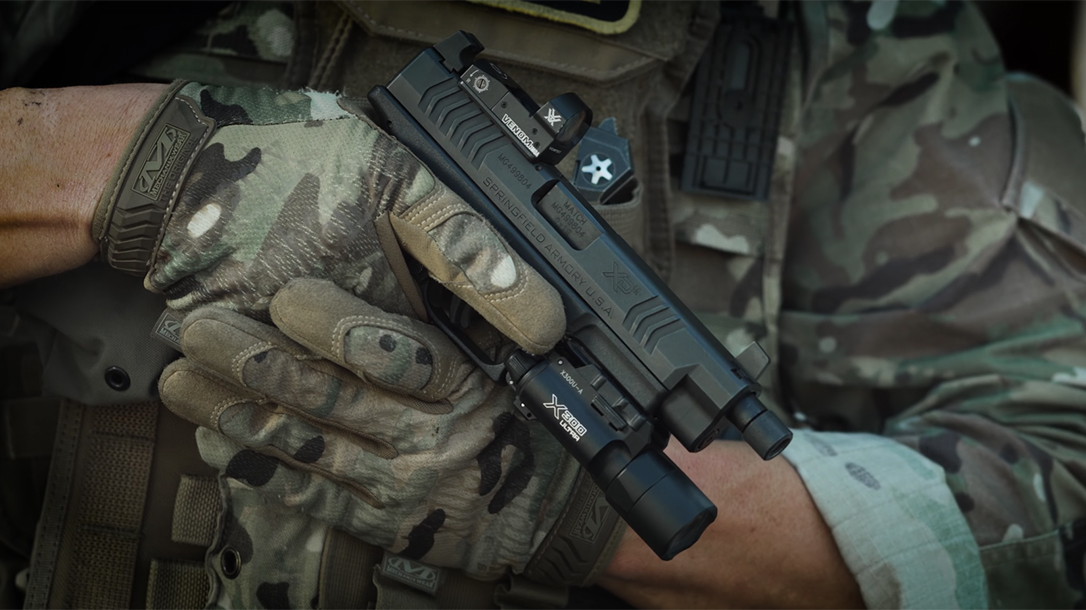 Springfield’s Armory’s Professional was custom-built to pass one of the most rigorous tests ever held for a duty pistol, beating several better-known “customs” for the contract. I’ve owned a couple, and they might be the epitome of the combat 1911. They’re hand-built, simple, almost indestructible, insanely accurate, completely reliable and just what you need—nothing more. But they came at a price. I paid about $2,500 for my first one almost 20 years ago.

Many shooters wanted the gun’s primary features without the cost, and the TRP did just that, costing closer to $1,200 at the time. It was an immediate hit, especially among serious users. Its accuracy rivaled that of the Professional, as did the fit and finish. And although the TRP isn’t a Custom Shop pistol like its predecessor, it’s still crafted by experienced gunsmiths. The slide-to-frame fit is excellent, with match-grade parts fitted by hand. Through the years, it has maintained its popularity as a custom-grade pistol at production-level prices.

People who were able to take personally owned handguns overseas for deployments frequently used TRPs, including American Sniper Chris Kyle. In an interview, he said, “In 2004, I brought over a Springfield TRP Operator, which used a .45-caliber round.” It appears the gun performed well until it “took a frag for me in Fallujah.”

He was even able to get the gun repaired later, attesting to its toughness and Springfield’s warranty. Kyle’s choice of a TRP later prompted the company to offer a limited-edition Legend Series TRP modeled after his carry gun. Each custom gun benefitted the Chris Kyle Frog Foundation, and the 1,000 pistols sold quickly.

Through the years, the TRP has grown as a choice for those working in harm’s way. Police departments authorizing 1911s often use the TRP. Several in my own department carried these guns, and it’s often my first recommendation for other agencies, officers and personal carry. Springfield Armory has always had an excellent program for working professionals and continues to have some of the best customer service in the industry.

The TRP’s reputation continues today, and Springfield is now offering two new 10mm models. These latest guns up the ante for duty, self-defense and even hunting.

Both 5- and 6-inch-barreled models are available, and I received both for testing. These pistols have match-grade bushings and barrels with fully supported feed ramps, and they’re hand-fitted for super accuracy. Both pistols sport forged-steel slides with a durable matte Black-T finish.

As for controls, both pistols have ambidextrous thumb safeties, checkered magazine releases and extended grip safeties. The guns also have Springfield Gen 2 Speed Triggers that have been tuned for a 4.5- to 5-pound pull.

More unique touches include the tall Trijcon night sights, which are paired with Trijicon RMR reflex sights with 1-MOA dots that allow for greater precision at the 10mm’s increased range. Finally, two 9-round magazines are included with each pistol.

I recall testing the first TRP that arrived at the gun store and range where I worked several years ago. The gun’s features were nice for its price, but the accuracy was incredible. 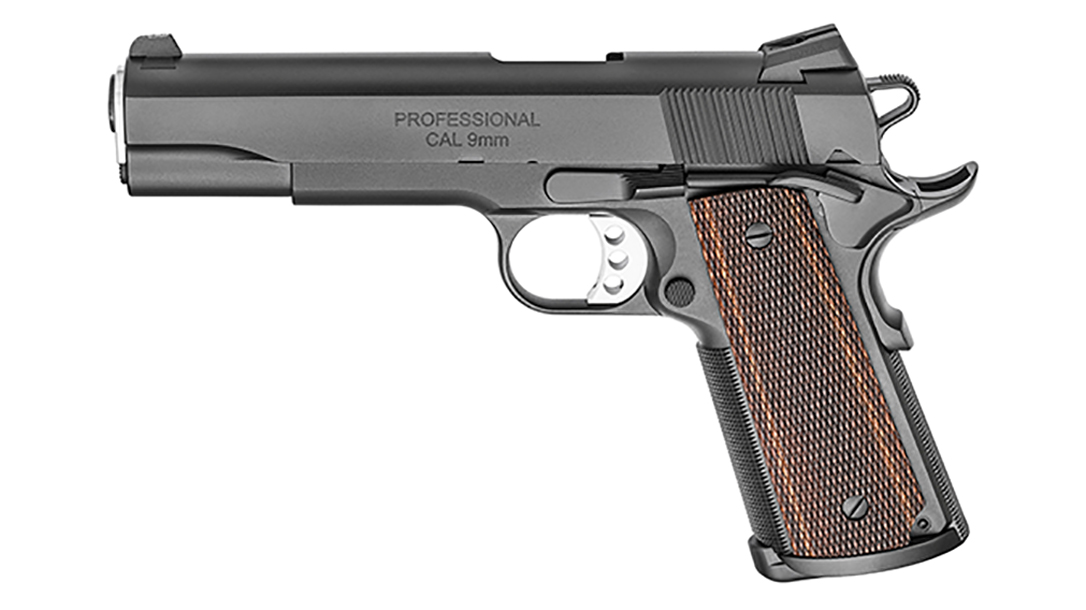 VIDEO: The FBI-Approved Springfield Professional 1911 Is Now in 9mm

Standing at 15 yards, I put three magazines of .45 ACP ammo into a 1.5-inch hole. One of my best customers, a longtime Bullseye competitor, said the pistol was as accurate as some of his competition pistols.

These 10mms hold up the TRP tradition nicely. Using a bag for support and the hood of my truck for a rest, the 6-inch-barreled pistol put five Sig Sauer 180-grain V-Crown JHP rounds into a group less than an inch wide, with four of the five shots almost in the same hole. Hornady’s 175-grain Critical Duty rounds produced similar results out of the 5-inch-barreled version.

Both guns were controllable and light on recoil using this ammunition. The triggers were predictable and broke very cleanly.

The Trijicon RMRs made that kind of accuracy easier at 25 yards and more so at 100 yards. My best group at 100 yards, using DoubleTap’s 200-grain Hard Cast rounds, was about 8 inches wide using the 6-inch-barreled gun, and all of my groups were less than 10 inches wide at that distance.

Springfield Armory uses an 18.5-pound return spring in the 5-inch-barreled TRP and a 16-pounder in the 6-inch-barreled model. Both ran 180-grain practice rounds pretty well with consistent ejection.

It’s always a compromise for manufacturers with the 10mm because designers don’t know what users will feed their guns, so they aim for the middle, so to speak. For most practice fodder, the 18.5-pound spring works well. If you switch to heavier loads, you might want to a heavier spring.

I only used 155-grain ammo with my carry 10mm, so it’s tuned to run those rounds perfectly. You could easily do that with these TRPs. The 6-inch-barreled TRP might benefit from a heavier spring if you plan on hunting with 180- to 230-grain loads. Nonetheless, both of the test guns ran flawlessly at the range.

The triggers on both test pistols were excellent and very predictable. I also really liked the Posi-Lock texturing on the grip frames. The pistols stayed put in my hands without “biting” me.

And while these aren’t exactly light carry pistols, the weight helps manage recoil and muzzle rise nicely. The safeties also snapped on and off with a satisfying click at the correct tension.

The Trijicon night sights are mostly backup units to the RMRs, but they’re still useful if the RMR is removed or turned off.

The sights are black with tritium inserts and no pronounced rings around the dots. They co-witness perfectly, making it easier to get on target quickly.

Out of the box, the RMRs were dead-center and just a tad low at 7 yards—a perfect start.

My carry pistols have uses reflex sights with 3.25-MOA dots, given their primary range is well within 25 yards. For hunting or longer ranges, though, a 1-MOA dot is a bit more forgiving as it won’t obscure as much of the target.

I’m not exactly sure why these two pistols have heavier, squared dust covers but no Picatinny rails. Maybe it’s to add some weight up front to help control recoil, or reinforce the frame for more powerful loads. But this means you’ll need a holster designed to accept a rail anyway, so it would have been nice to have the rail.

The 10mm is popular among tactical teams that also use weapon-mounted lights. This pertains more to the 5-inch-barreled model, but it’d be nice to add a visible or infrared laser to the 6-inch-barreled TRP for hunting hogs and other predators. Still, 1911 users are a particular bunch, and my guess is that, while many will appreciate the lack of a rail, just as many will opine for it.

Overall, these TRPs are excellent reflex-sight-equipped pistols built for one of the most versatile pistol chamberings ever developed.

The 5-inch-barreled TRP is perfectly suited to home defense and some duty applications, and the 6-inch-barreled version is born for hunting. Either way, you really can’t go wrong with a Springfield TRP 10mm.

These fit the mold perfectly, only offering more choices. If you’re looking for a 10mm that comes out of the box with a reflex sight, these pistols need to be at the top of your list.