Forged in the fire of mystical caves by masters of metal, the hammer Mjölnir emerged as a legend. Wielded by the Norse god Thor, it was a weapon of incredible power that could even level mountains. With Mjölnir in hand, there was nothing that Thor could not do. And while it was capable of incredible power, it was also beautifully crafted as well. If we fast-forward a few millennia, we’ll find another group of master craftsmen forging their very own modern hammer. The not-very-cave-like shop of SSVi has created a signature series of custom Glocks that have each earned the Mjölnir name. 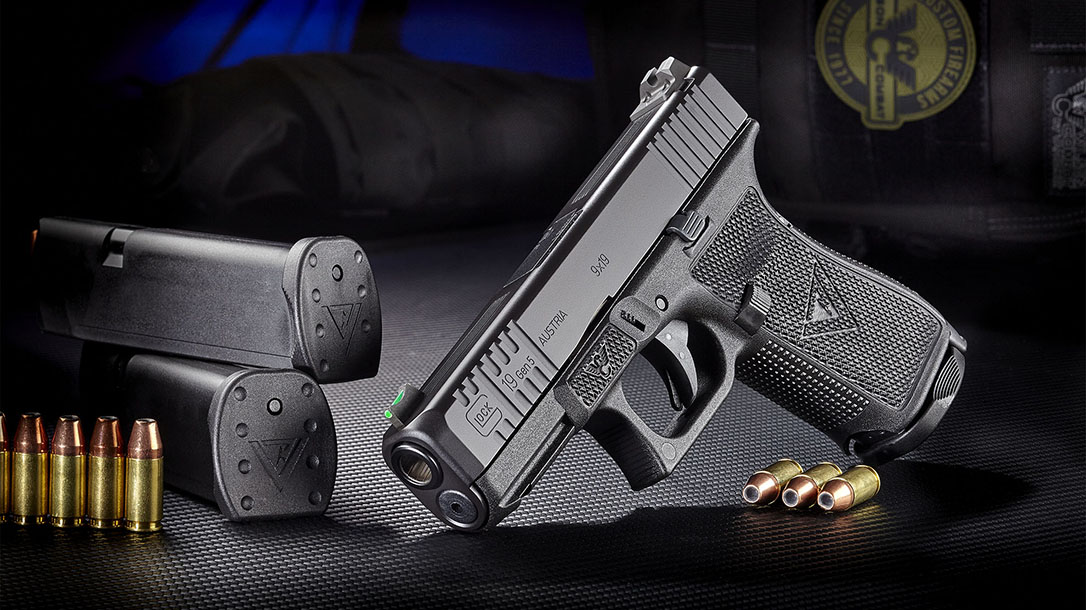 While such a dramatic buildup may be a bit over the top, seeing these pistols in person certainly invoked a sense of awe. The simple fact is that they are beautiful pistols. With contoured frames and gold trim, they are eye catching. Some curmudgeons may dismiss this, but rare is the day that people sit around talking about how proud they are of an ugly gun they own.

SSVi, which stands for “Speed, Surprise and Violence of Action Industries,” has made a name for itself with its Glock Tyr trigger. Keeping with the Norse theme, Tyr was the Norse god of war who was invoked to encourage victory in battle, matters of law, justice, honor and oaths. With that history, it was no surprise to learn that the gunsmiths at SSvi had named their premium Glocks Mjölnirs. While the company currently offers two versions with the same customizations—a Glock 17 and Glock 19—I had the opportunity to spend extensive time with the latter.

The most eye-catching aspects of the gun are the SSVi signature series slide cuts with a top window by DP Custom Works. The slide work is exclusive to the SSVi signature series guns and includes the obvious aesthetic designs as well as widened rear serrations. The company also found that widening the serrations helped tremendously when it came to running the slide. Also adorning the slide is “Mjölnir,” which is engraved in the ancient Elder Futhark runic alphabet by LEO Armory.

All of the steel components are titanium-nitrided in gold, including the custom fluted SilencerCo barrel. Anything that could not be nitrided was Cerakoted in gold by Blowndeadline. This includes the aluminum Tyr trigger shoe and logo area on the side of the grip frame. The SilencerCo barrel took on a very unique look after SSVi enlisted the help of a barrel smith to create a one-of-a-kind appearance. All of these SSVi pistols also come standard with Trijicon HD sights.

Moving on to the lower section of the pistol, you’ll quickly notice that SSVi included a Raven Concealment Systems Freya magazine well for faster, fumble-free reloads.

The work done on the Mjölnir frame is extensive. When I asked Damon Young of SSVi to describe what he does to the frame, he gladly shared the process. “It includes the shaped and contoured glove bevel (inner triggerguard work), a slight undercut (making the undercut on a Glock has less to do with how much you undercut it and more to do with how you contour it to shape up against the human finger underneath it), all the hard edge bordering and texturing, and on these, the gold Mjolnir logo. Blowndeadline sends me back the Glock with simply a big gold square on the side. I carve it into the hammer symbol you see now.” 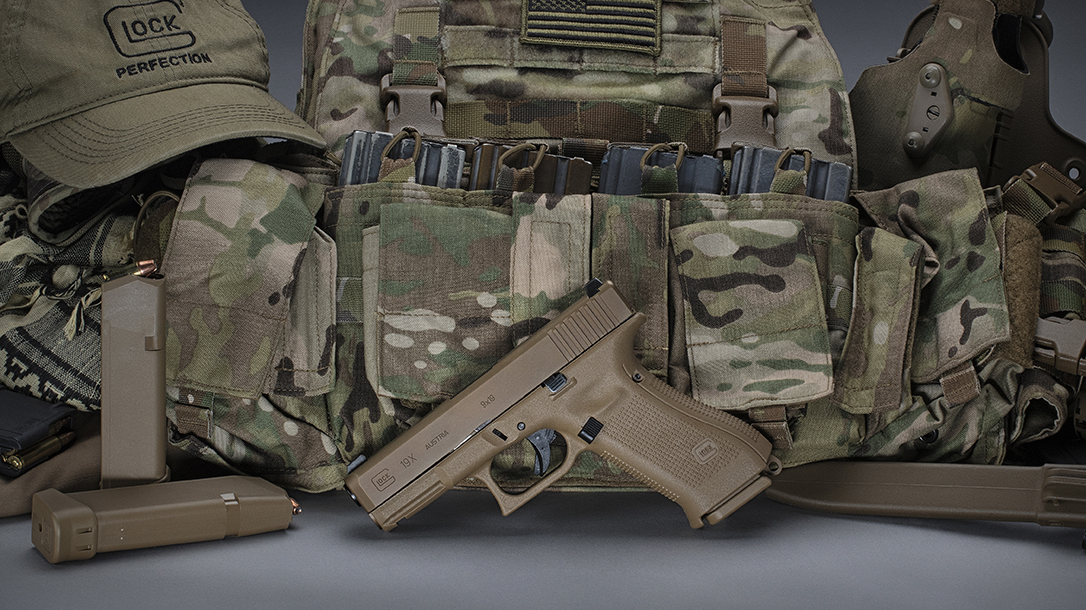 Being an SSVi pistol, it obviously has to have one of the company’s solid Tyr triggers. What makes these so special is that the trigger shoe has a unique shallow-curve contour, which improves the travel and overall feel. With the trigger positioned almost directly below the pin, you get better leverage and in turn a smother feel.

Now you might be asking yourself, “How many pounds does the Tyr trigger weigh?” Well, to the shock of many, changing out the shoe on a Glock trigger has no effect on the actual pressure required to fire the gun. The components associated with that are connectors and springs. The overall design of the trigger, though, with its improved leverage, does in fact make it feel a tad lighter and definitely smoother.

SSVi did not attempt to completely redesign the Glock trigger. The company simply wanted to provide an improvement. This is important because, while the trigger is astronomically better than a stock trigger, it still has a familiar feel. The trigger on my test gun felt very familiar, and the overtravel was slightly decreased. The reset was also short and, in a word, phenomenal. Paging Glock: Your new triggers have arrived.

While some will balk at a “blinged-out” Glock, a trip to the range showed that this gun shoots as good as it looks. SSVi has no intention of this gun being a safe queen, so we went to work with it in short order. First up was the old-school shooting-for-groups event. Shooting at 15-yard targets off a range bag, I was able to get all three brands of test ammunition into a solid cluster. The Federal American Eagle Syntech ammo seemed to run very well in the pistol, allowing me to create a 1-inch group.

Where the gun really stood out, though, was in the drills and fighting scenarios we use in training. While the Mjölnir had a familiar feel in my hands, its improved contour and trigger boosted its performance. My overall accuracy improved slightly, and the gun shined in ambidextrous drills. It is my belief that the gun simply fit my hands better than a standard Glock. To the raw beginner, this may not be noticeable, but to those like myself who send a metric ton of rounds though our guns annually, it is most certainly an improvement. The improved leverage of the trigger shaved time off of my splits and allowed me to put the pedal to the metal in the end.

Next, we decided to invoke the hammer spirit of the gun and start ringing steel. With targets set from 15 to 50 yards, the Mjölnir hammered away, consistently ringing steel. So, we began to wonder, “How far out can this pistol go?” Using a completely unscientific methodology, we hit steel targets out at 75, 100 and 150 yards. The 75-yard target was not much of a challenge, and the 100-yard steel began to ring consistently once we had the hold down properly.

At 150 yards, the sight completely covered our target, and shots became more of a guess. While quick to acquire, the large orange dot on the Trijicon HD front sight is not designed for off-the-cuff long-range pistol shooting. The trigger on the Mjölnir made this long-range test interesting, however, and made me wonder what adding an optic to the gun might do. Maybe I’ll save that for another article.

With several hundred rounds through the gun, it had acquired a pretty healthy layer of grunge. The barrel had lost some if its zing, and the entire pistol was dusty. The nitride coating proved itself, however, as a quick wipe down removed almost all of the film that had built up on the gun. Once back in the shop, it took a quick ultrasonic bath and was completely restored to its original brilliance.

To some, the work SSVi has done to the Glock 19 is unnecessary. It may border on excessive, and the craftsmanship put into this gun comes at a price well beyond a bone-stock G19. But few things in life are truly necessary beyond food, shelter and water. The things that make life better go beyond necessary. Many of the naysayers on this topic also have a 55-inch flat-screen TVs or special tires on their lifted trucks. While not necessary, these are nice additions to our lives.

The same holds true for the Mjölnir. It takes our everyday Glock and makes it truly exceptional. It’s the hammer of your dreams.

This article was originally published in “Combat Handguns” July/August 2017. To oder a copy, visit outdoorgroupstore.com.