by Paul Scarlata
in Guns, Handguns
0

Every part built into the STI Marauder is designed to help you make every shot count, whether you’re on the shooting range or defending your family.

When I was first assigned this article, I was in a bit of a conundrum. The reason being that the handgun under discussion here was designed primarily for 3-Gun competition. This discipline requires competitors to engage targets at various distances with rifles, shotguns and handguns. While I have competed in action pistol sports for the past 35 years, I must confess that I had never actually competed in a 3-Gun match before receiving this pistol for testing. But one thing helped dispel my initial anxiety—a trend regarding the 9mm that I’ve noticed at recent USPSA matches. 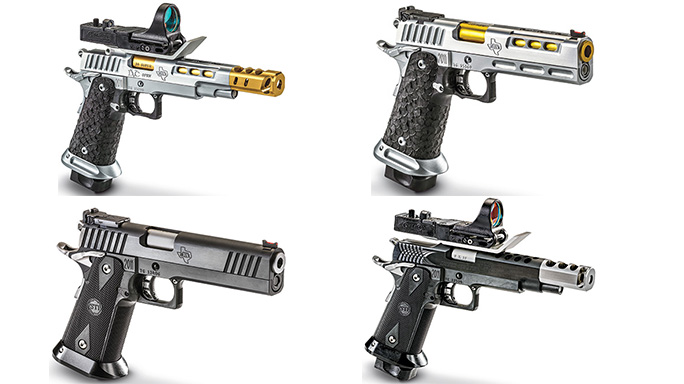 The STI Marauder is built on the company’s well-known, multi-material 2011 modular frame. The upper assembly is made from steel. It contains the rails and full-length dust cover that supply weight up front where it does the most good to dampen muzzle flip. An accessory rail on the dust cover makes it easy to mount tactical accessories such as lights or lasers. This can be very handy for shooting in night matches or training in low-light conditions. At the rear of the pistol is an extended, ambidextrous thumb safety; a high-swept beavertail grip safety; and a lightweight, skeleton-ized hammer that helps reduce lock time.

The carbon-steel slide features sharply cut front and rear grasping grooves while the sights are both mounted in dovetail cuts, with the front being a red fiber-optic unit while the rear is STI’s low-profile Tactical Adjustable Sight (TAS), which is fully adjustable for windage and elevation. I am not a fan of three-dot sight systems. So, I was very pleased to see that the rear sight is plain black with a serrated rear face to cut down on glare.

The frame is made from glass-filled nylon polymer. The use of a polymer grip assembly keeps this component narrow. This allows the use of double-column magazines while still keeping the grip suitable for shooters with smaller hands. The polymer grip frame also has metal panels molded into it for metal-to-metal contact with the slide; it contains a skeletonized, match-grade trigger. The frontstrap and mainspring housing are aggressively checkered.

One of the pistol’s really distinctive (and practical) features is its Tactical Magwell funnel. Not only does this accessory provide a gaping opening so that even the most fumble-fingered among us (like me) can perform fast, smooth reloads, but oval reliefs on the either side of the funnel body allow the shooter to grasp and extract a recalcitrant magazine that refuses to fall free. The magazine baseplates have matching reliefs so you can really get a good grip on a stuck magazine.

The slide and upper frame assembly boast a black Cerakote finish that not only protects the pistol from wear, environmental extremes and the vagaries of Mother Nature but whose dull black color emphasizes the pistol’s practicality as a truly serious competition/fighting handgun. It should also be noted that the Marauder’s top end is slightly lighter than some of STI’s other pistols to ensure reliable operation with various 9mm loads.

A stainless steel, fully supported, ramped barrel is retained by a traditional Browning-type bushing. I mean, why screw around with success? A full-length, one-piece recoil spring guide rod ensures smooth operation and consistent lockup, and greatly eases disassembly. The Marauder comes standard with a 20-round magazine, although 15-, 17- and 25- rounders are available as options.

Now a bit about the STI Marauder’s chambering. Those of you familiar with USPSA competitions are well aware of the discipline’s “power factor” rules. For those of you who are not, here is a quick tutorial. The USPSA recognizes two power factors: major and minor. These are determined by multiplying the weight of the bullet you fire from your handgun by its velocity, divided by 1,000. Major power factor is 165 while minor is 125.

Using a major cartridge gives you advantages when it comes to scoring on the sport’s cardboard targets. These are divided into “A,” “B,” “C” and “D” zones. The value for a hit in each zone depends on the power factor of the caliber being used.

In addition, if you are competing in the Limited, Limited 10 or Single Stack divisions, you can only claim major if you are using a cartridge of .40/10mm or larger. Limited is the most popular USPSA division, which explains why the majority of Limited shooters utilize high-capacity pistols chambered for the .40 S&W cartridge.

But 3-Gun match rules regarding handgun calibers are less convoluted, especially for the mathematically challenged among us: “Handgun ammunition shall be 9mm Parabellum (9x19mm NATO) or larger, unless otherwise stipulated under equipment division rules.” And 9mm handguns are generally the most popular for 3-Gun due to their higher capacity and lighter recoil. It is rare to encounter scoring systems or targets that reward larger calibers.

As for my situation, as a result of 50 years of firing handguns and an inordinate amount of time spent using typewriters (remember them?), word processors and computer keyboards, I suffer periodically from carpal tunnel syndrome in my right hand. On occasion, the discomfort from this condition has made firing larger-caliber pistols quite painful. As I am not a fan of Production division (the only division where using a pistol with a minor power factor is not a disadvantage), over the years I have used several different high-capacity 9mm pistols in the Limited division.

This may also be due for the fact that, unlike many of my fellow pundits, the 9mm is my favorite pistol cartridge. Most of my concealed-carry, home-defense and competition pistols are chambered for Georg Luger’s legendary cartridge. And while I wish to avoid another 9mm versus .45 ACP argument here, it should be noted that the 9mm is the most popular centerfire pistol cartridge in the world, and thanks to improvements in its performance, many military/police agencies who formerly used larger-caliber pistols are reverting to 9mm service sidearms.

Several manufacturers now offer high-capacity 1911 pistols chambered for the 9mm cartridge specifically designed for competitive shooting, and in the past few months I have noticed a number of experienced USPSA shooters using them to compete in Limited division matches.

When I queried them as to their choice of a minor power factor chambering, their answers followed a similar pattern. First of all, the 9mm has less recoil, which allows them to shoot faster and more accurately (remember, an “A” hit counts the same regardless of power factor). The magazines hold more rounds while still keeping within the 140mm length mandated by USPSA rules. This means fewer reloads during a particular stage. Lastly, 9mm ammunition—whether factory or reloaded—is cheaper, allowing them to practice more.

Because of its lighter recoil, 9mm pistols are also popular (and practical) for new shooters, younger competitors or those who have trouble handling recoil. In fact, at one of the clubs I shoot at, several young ladies compete in Limited division with high-capacity 9mm 1911s.

Several months ago, I tested an STI 9mm DVC Limited pistol in competition. Despite using a minor power factor cartridge, the pistol’s above-average handling qualities, high-capacity magazines and excellent sights (with a bit of help from yours truly) went a long way towards overcoming this disadvantage, and I finished the match in a respectable position. So when STI asked if I’d like to test one of its Marauder pistols, I’m afraid my quick positive response may have caused some alarm.

As I mentioned before, over the years I have tested a number of STI pistols. It would be redundant to go into detail as to the quality of materials, fit, finish and assembly of the Marauder I received. Let’s just say it was one fine-looking and fine-handling pistol.

Some severe rainstorms had destroyed my shooting club’s 25-yard backstop, so my wife, Becky, and I paced off to what we estimated to be about 20 yards and began our test of the STI Marauder by shooting it from an MTM K-Zone rest. 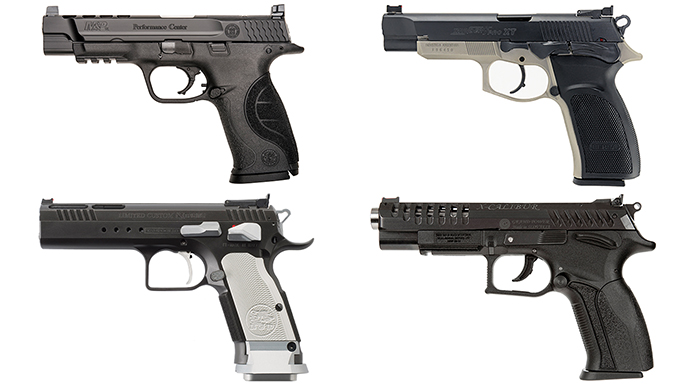 And was it accurate? Well, of the dozen targets we fired at, only 10 rounds wandered outside their respective 10 rings, and not very far at that. Our best group, fired with Winchester’s 3-Gun ammo, measured a mere 0.8 inches. Yup, it’s accurate! Off-hand drills on a combat target from 5, 7 and 10 yards showed the STI could put 9mm rounds just where I wanted them.

A few weeks later, I got a chance to the run the Marauder through its paces at a USPSA match at the Carolina Guns & Gear Range in Franklinville, North Carolina. A Blade-Tech Dropped Offset holster that I’ve used for years proved a very comfortable way to carry the STI and provided fast, smooth presentations.

The STI performed flawlessly through the 150-round match. The pistol’s excellent sights and light recoil allowed me to engage the large number of reactive steel targets included in the course design. The 20-round magazines required only one quick reload to complete each stage.

I usually end these types tests and evaluations by voicing any criticisms I have of the firearms under discussion. In the case of the STI Marauder, I have only one and it is relatively minor. I don’t have large hands. The option of an extended magazine release would be most welcome by those shooters like myself who possess short digits. Now if STI will just let me keep this Marauder for a few more months so I can really wring it out at matches, I’ll be a happy camper.

*Bullet weight measured in grains, velocity in fps by chronograph and accuracy in inches for best five-shot groups at 20 yards.