by Todd LofGren
in Guns, Handguns
0

A descendant of the .38 Hand Ejector Military & Police Model of 1899, Smith & Wesson’s first swing-out-cylinder revolver to chamber the then-new .38 Special cartridge, the Victory model, was an updated wartime production version introduced in 1942. It was ultimately supplied to every branch of the American armed forces as well as British Commonwealth countries during WWII and continued in production until 1945.

By 1942, the Smith & Wesson Military & Police Model 1899 revolver had morphed through several upgrades and modifications to what was then known as the “.38 Hand Ejector Military & Police Model of 1905, Fourth Change.” During those 42-plus years of manufacture, almost 1 million of these medium-framed revolvers were produced. On April 24, 1942, when serial numbers for the M&P series reached 1 million, a new series was initiated, with serial numbers beginning, for the first time, with a letter prefix. The letter “V” was chosen, with the first revolver in the sequence numbered V1. This new series of revolvers was nicknamed the Victory model to signify Smith & Wesson’s hopes for a quick victory and an end to the war.

Before the United States entered World War II, Smith & Wesson had been producing a variation of the M&P revolver for British Commonwealth nations. Except for its chambering, it was practically identical to the commercial variation in production at the time.

This British version, at their request, was designed to fire the .38 Smith & Wesson round (not the .38 Special), a slightly less powerful cartridge loaded with a heavier 200-grain lead round-nose (LRN) bullet. This round became known as the .38/200, and the revolver built to fire it was known as the .38/200 British service revolver. 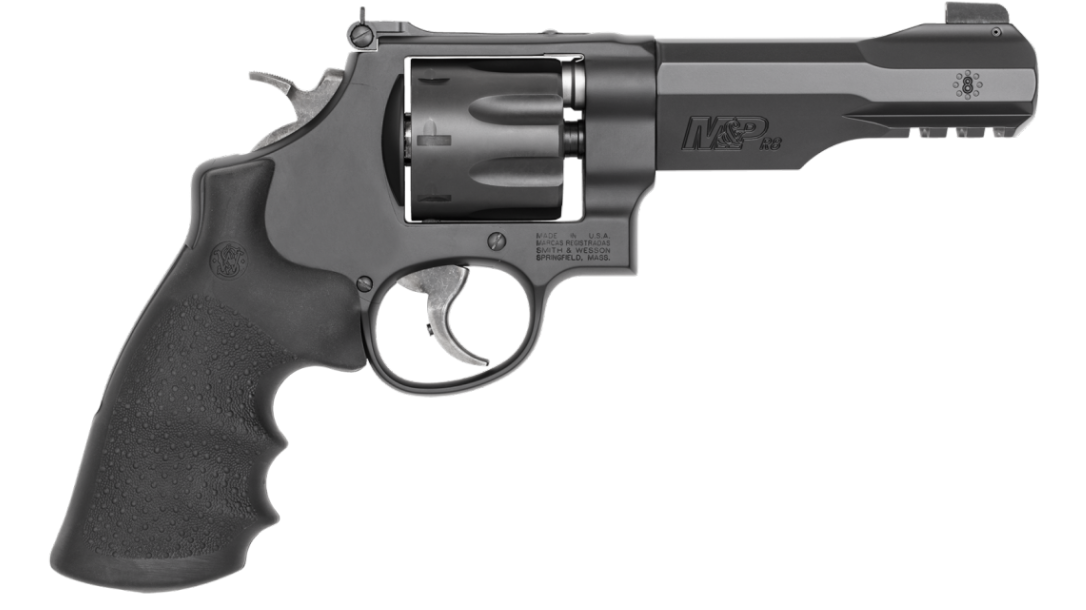 To meet the needs of the UK’s war effort, from early 1940 until early 1941, most of Smith & Wesson’s revolver production was directed at the manufacture of this variant. These British service revolvers were serialized in the M&P series and were initially supplied with barrels of 4, 5 and 6 inches. Early guns were brightly blued, then brush-polished blued and then sandblasted blued, with those produced later in the run wearing a sandblasted Parkerized finish.

By February of 1941, production of the British service revolver had increased sufficiently to let Smith & Wesson reintroduce the .38 Special-chambered Military & Police revolver. With the United States’ entry into the war in December of 1941, the British version and a U.S. version chambered in .38 Special were produced concurrently, with both models numbered within the new V-prefixed serial number range.

British guns were produced only with 5-inch barrels, and the American version came with a 2- or 4-inch tube. With the war in full force, both models wore a sandblasted Parkerized exterior. Although some early guns were issued with checkered walnut grips with S&W medallions, most had grips made of plain, smooth walnut. All Victory models had square-butt frames, and lanyard rings also came standard. The weight of an unloaded 4-inch-barreled version was 34 ounces.

The revolver’s sights were fixed, with the front consisting of a half-moon blade forged integrally with the barrel, and the rear was a trough milled into the topstrap. The hammers sported narrow, knurled spurs, and the triggers were serrated. Unlike the rest of their Parkerized exteriors, these parts were casehardened.

During its production run, several minor design changes were introduced on the Smith & Wesson Victory model to facilitate increased production and, in one case, improve safety. After production of about 769,000 revolvers in the series, Smith & Wesson incorporated a new hammer-block safety system after receiving reports of a failure with the old system in which a dropped revolver fired.

With the introduction of this new hammer block, the factory changed the prefix on its numbering system from “V” to “VS” to allow for easy identification of revolvers. Partially completed revolvers—those with frames already numbered but of the old style—were upgraded with the new safety system, and an “S” was added to the beginning of their serial numbers, creating a third prefix—“SV”—within the Victory series’ wartime production run.

About 850,000 Smith & Wesson Victory model revolvers of both chamberings were produced. Many of the lend-lease British revolvers found their way back to the United States, where they were rechambered for the more popular .38 Special cartridge. That conversion that didn’t work well because of the slightly larger diameter of the .38/200 round, which left rechambered cylinders somewhat oversized. I owned one of these converted revolvers in the 1970s, and although it was shootable, the spent cases were somewhat bulged and distorted, and the extraction of fired cases was often recalcitrant. For the S&W collector’s sake, I wish they’d have left these guns alone.

The Smith & Wesson Victory model featured in this article is from my personal collection, where it’s resided since 1984. According to a letter of authenticity obtained from Smith & Wesson historian Roy Jinks, this six-shot revolver was shipped on May 16, 1944, to the U.S. Navy in Virginia. It’s typical in all respects, with its sandblasted Parkerized exterior and plain, unadorned walnut grips.

Although I wouldn’t call its exterior crudely finished, with its telltale mill marks and obvious lack of other surface preparation, it’s recognizable as a wartime production arm. As is typical within the serial number range of the revolver, the left side of the topstrap is marked “U.S. Property,” followed by the initials “G.H.D.,” which is the acceptance mark of Guy H. Drewry, ordnance officer at the time. The initial “P,” a proof marking, appears on the frame, cylinder and the underside of the barrel.

While lacking in aesthetics, this piece functioned smoothly and locked up as tightly as any Smith & Wesson revolver produced today, with minimal side-to-side cylinder play and fore and aft movement present. Its barrel/cylinder gap measured a borderline excessive 0.012 inches, but it had nice, smooth single- and double-action pull weights of 4.5 and 9.25 pounds, respectively.

Though the revolver bears a few mars on its finish and grips, those appear to be more in line with handling and storage dings rather than battle scars. There’s just a shadow of a cylinder drag line, and from that and all other appearances, the gun looks to have been relatively unused and fired little. During my ownership, I had never fired it. But that would soon change.

For much of WWII, the issued round for the Smith & Wesson Victory model (and any other .38 Special firearm, such as the Colt Commando revolver) would have had a 158-grain, full-steel-jacketed, copper-flash-coated bullet in compliance with the established rules of land warfare. From the 4-inch barrel of a Victory, the military loading of that projectile was reputed to travel about 850 fps at the muzzle. A 120- or 158-grain red-tipped tracer round was also standard issue for this revolver at that time, to be used by naval and marine aircrews for emergency signaling.

Not having any period ammunition, I selected two commercial round-nose .38 Special loadings from my ammunition stash: a 150-grain, copper-washed loading from Winchester’s Super-X line, and the other a 158-grain lead-projectile round from Federal. I also acquired a few military loadings to try, but those were head-stamped “RA” and “67,” indicating they were of much more modern manufacture. The loads also used a lighter 130-grain FMC projectile.

With targets set at 20 yards and my chronograph screens at 10 feet, I fired several five-shot groups with the commercial offerings but only two groups with the military rounds because of my limited supply. Groups with all the loadings formed in the 2.25- to 2.75-inch range, with each varying from my point of aim to one degree or another.

The 150-grain Winchester +P rounds hit about 5 inches above and 2 inches right of my hold at 20 yards. Hits with the heavier, slower Federal offering were just as high but well centered. My Victory revolver liked the newer, lighter-bullet Remington military loads the best, hitting quite close to my point of aim from the 20-yard mark. From 7 yards, it was easy to keep a quick six shots fired in double-action mode within the 4-inch bullseye I aimed at. As expected, the old warhorse functioned perfectly throughout the session.

Because many of the Smith & Wesson Victory model revolvers were used by U.S. Navy and Marine pilots and crews during WWII, it seemed only natural to showcase it in this article with a modern rendition of the holster it was most often issued with and carried in during the war. Because of the tight confines in military aircraft, the shoulder holster was the primary mode of carry for this weapon, as it kept the gun high, secure and out of the way, yet positioned so access was quick and easy.

El Paso Saddlery makes a superb rendering of this holster for many handguns with barrels from 3 to 8.375 inches long. Called the 1942 Tanker holster, it’s patterned closely after the M3 rig most often associated with this weapon. It’s an across-the-shoulder setup with a 1.5-inch-wide support strap fabricated from saddle-grade leather. This strap is sewn to the holster at one end and secured at the other by a buckle and D-ring, allowing adjustability for various body sizes or types of clothing. The main pouch is formed from one piece of leather folded over and sewn to accommodate the weapon it would carry. 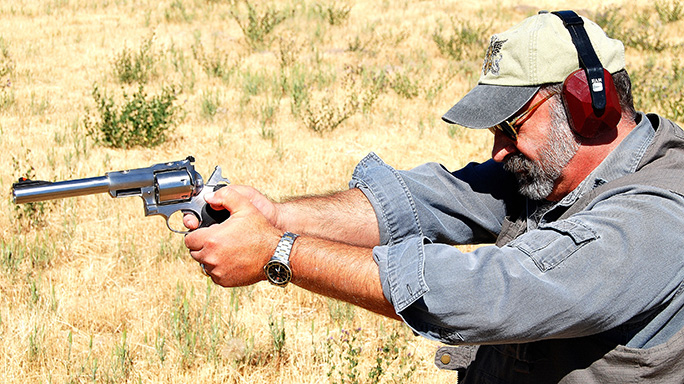 The backside of the holster is cut so it forms a back plate of sufficient size to form a barrier between the weapon and wearer, and to provide stability to the weapon and holster. It’s also a quick and efficient way to build a holster system, a highly desired trait in times of war. The revolver is secured in the pouch by a safety strap that fastens, like the original, with a lift-dot fastener. A second strap is sewn at the bottom of the holster for securing the system to your belt.

Although originals were unlined, El Paso Saddlery offers this upgrade. The contrasting pigskin, folded and sewn along the top of its pouch, adds a nice custom touch to the holster ensemble. A slot cut horizontally into the pouch (like that of an original) allows a little extra room to accommodate the weapon’s cylinder.

Offered plain or embossed with one of several military designations (like “US,” “USAF,” “USN” or “USMC”), mine came with the most commonly encountered “US” marking. When adjusted to your individual girth, this holster is easy and quick to put on and take off, and it carries the gun comfortably and accessibly. Like all products I’ve reviewed from El Paso Saddlery, the Tanker rig is made from high-quality materials, is extremely well assembled and fits my Victory revolver like it was sewn around it.

A basic Tanker for handguns in the 3- to 5-inch barrel range costs $119, with an extra $8 if barrels are longer. The lining will add $25, and if you’re looking for something really special, you can have yours basket-, border- or fish-scale stamped or carved in a floral pattern, and those extras are priced accordingly. The 1942 Tanker is available in russet or black. Although a replica of a military holster, today’s Tanker remains a great holster for hunters, pilots and drivers.

As it turns out, “Victory” was a pretty good name for these old revolvers, and the M&P series is still available today in Smith & Wesson’s Classic line. It’s still a workhorse capable of protecting yourself and your home.

*Bullet weight measured in grains, velocity in fps by chronograph and accuracy in inches for best five-shot groups at 20 yards.

For more information, visit smith-wesson.com. For more on the 1942 Tanker holster, visit epsaddlery.com.