This exceptional nickel and gold Peacemaker from Umarex has faux-ivory grips and fires 4.5mm pellets.

As far back as the 1850s, Colt began offering silver plating and gold-washed cylinders, hammers and triggers as options on its percussion pistols and, later on, 1870s cartridge conversions. Gold plating (or gold wash) was usually added to engraved guns. Over time, silver plating wore thin on the high edges and tarnished unless well cared for. However, with the introduction of nickel plating, the average revolver could be given a finish almost impervious to rust and corrosion from gun powder (if modestly maintained) while providing a smoother, more durable finish than a blued revolver. Nickel-plated sixguns were also easier to wipe down and keep clean. 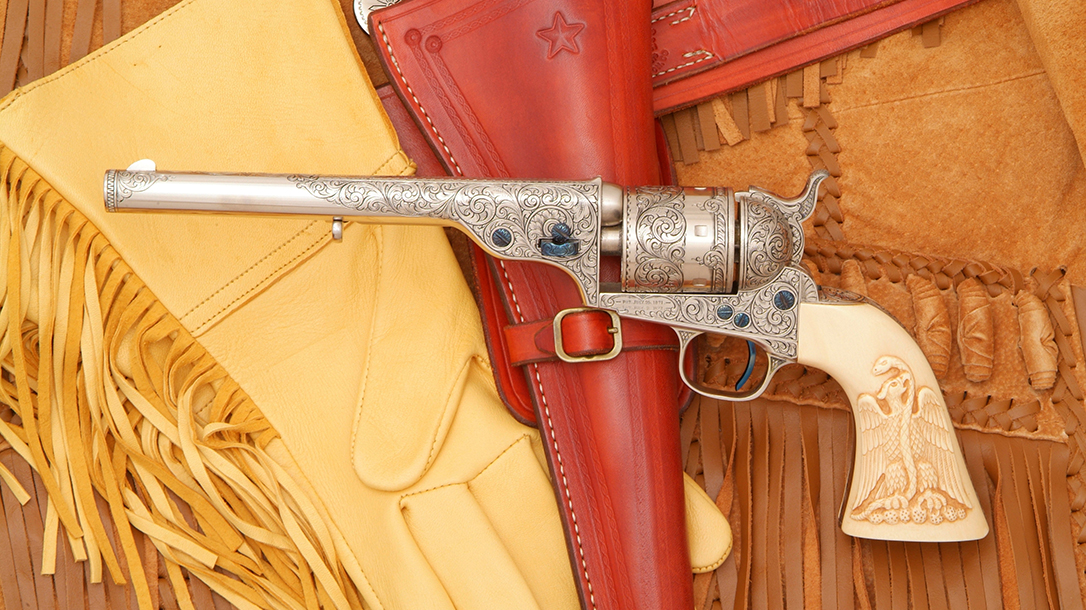 Colt began offering nickel plating as the standard finish on its single-action line in 1877. On the Rockwell hardness scale, nickel plating is around 40 to 45 HRC. Heavier electroless nickel plating, which came into popular use in the 1940s, is 50 HRC. Of course, HRC ratings are based on plating over steel, not aluminum alloy, which is used for manufacturing the Colt-licensed Umarex CO2 Peacemakers. The hardness of aluminum actually falls into the HRB category, but HRC and HRB ratings do overlap, and the hardness of nickel plating on aluminum is not significantly lower.

It was the proven durability of nickel plating that prompted the U.S. cavalry to specifically issue nickel-plated Colt Peacemakers to its scouts. This was often the reason many cowboys preferred nickel over blued guns as well—they were easier to maintain on the trail. The flashiness of a nickel gun wasn’t always the foremost reason. Many lawmen also chose nickel-plated guns over blued models. For example, Bat Masterson owned a total of eight Colt Peacemakers, all of which were nickel plated. Many well-maintained nickel-plated Colts from the 1870s and 1880s have survived in almost 100-percent condition for more than 120 years.

Colt offered a variety of extras for its standard models, including several grades of factory engraving, high-polished blued finishes, nickel plating and several combinations, including bluing with a nickel-plated cylinder, hammer and trigger, and nickel with a gold-plated cylinder, hammer and trigger. Gold plating could also be added to the ejector housing and ejector rod if ordered. If you had the money, Colt had the options.

These same options could also be added at the customer’s request by specialty retailers like Schuyler, Harley & Graham in New York City. Tiffany & Company was also a major retailer of custom engraved and finished Colt, S&W and other premium revolvers from the 1860s to the mid 20th century. Umarex’s nickel and gold Colt CO2 models are very much in keeping with that tradition.

In the 1870s, a 7½-inch-barreled Colt Peacemaker sold for around $18. Nickel plating was an extra $2 to $2.50, and gold plating could add another $2 to $3. In creating its superb CO2 Peacemakers, Umarex and Colt did not wait long to introduce nickel-plated models back in 2015, and late last year they added a nickel and gold, 7½-inch-barreled, pellet-firing model stocked with attractive aged faux-ivory grips and inlaid Colt Peacemaker medallions. As non-engraved handguns go, this is one sharp-looking revolver and only $20 more than the all-nickel 7½-inch-barreled model.

In filming a Western, a little added drama is needed, especially in a gunfight, and in fact, if one were wearing a long duster, it would have to be thrown back to clear the holster. In my action sequence drawing the Umarex Colt Peacemaker, the flaring coattail adds to the effect as it would in a film or even here in a still photo (shown at right). And there really weren’t “fast draws” in the Old West. The holsters just weren’t designed for it, especially in the 1870s. They were built to cover and protect the gun from the elements. Guns sat low in the holster because the throat was cut shallow to cover almost all of the triggerguard, like the copy of an 1870s holster I’m wearing in the photos. It was copied from an original by Chisholm’s Trail.

The best way to increase your speed with a period-style holster is to wear it in a crossdraw position and sweep the gun across your waist. Pulling a 7½-inch-barreled shootin’ iron from a vertical holster on the strong side takes a long motion before you can rotate the barrel upward. That’s why you see a lot of cowboys (mostly in films) wearing their holsters slung low on the hip. You rarely see this in period photos. The crossdraw sweep cuts the drawing time down a little if you’re fast enough; it’s really a personal choice.

Most gunfights in the Old West were slow, and more often than not, guns were already drawn before any shooting started. Sometimes that was enough to prevent it from starting at all if everyone had their wits about them. The quick draws like we see on TV and in movies is mostly exaggerated, and back in the days of the great black-and-white TV Westerns, quick draws were done from specially designed holsters with most of the triggerguard exposed by a deeply cut-down throat and a contoured pouch that allowed the gun to be cocked while it was still in the holster. That was part of the secret. Richard Boone in Have Gun, Will Travel was a master of the quick draw. Most of the Warner Brothers TV Western stars all used the same fast-draw rigs designed by Hollywood quick-draw expert and gun coach Arvo Ojala.

The trigger pull on this latest two-tone 7½-inch-barreled Umarex is nearly a hair trigger, averaging 1.73 pounds. The average velocity for this pellet-firing Umarex is rated 400 fps, which is pretty decent for a CO2 pistol. 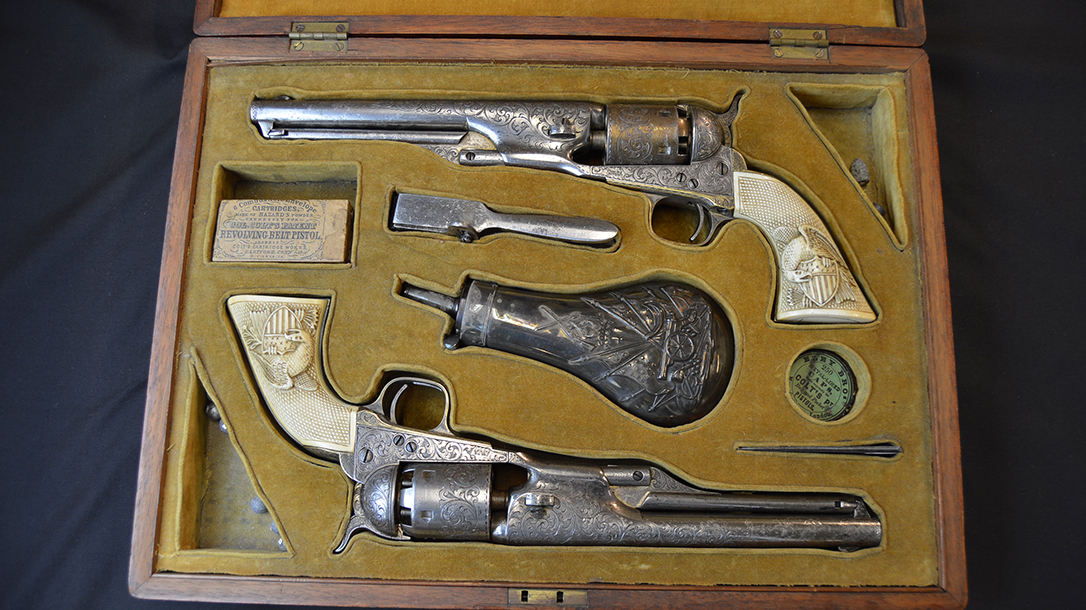 For the short series of tests I did for this article, I started by timing my draw and first shot. The fast draw is, of course, based entirely on my skill level; I am by no means at competition level when it comes to fast draws. My average time to draw and fire was 0.8 seconds. (I also ran the same test with a 5½-inch-barreled Umarex Colt Peacemaker, and my time was 0.5 seconds.)

The second part of the test involved shooting at a full-sized cardboard B-27 silhouette target. Holding the nickel and gold Umarex on targets 30 feet away, I put six rapidly fired rounds into a 1.5-inch cluster and created a second almost-matching group measuring 1.51 inches, all in the 10 and X rings. Shooting from the hip at 10 feet, I fanned off six shots that grouped into 1.75 inches, a little low and left of the bullseye. Of course, there’s no recoil with the Umarex Colt Peacemaker, so it’s a little easier to be accurate, especially when fanning.

If you are into Cowboy Action Shooting, practice sessions with this 7½-inch-barreled CO2 Peacemaker (especially indoors) is time well spent honing your drawing and aiming skills.

This article was originally published in “Guns of the Old West” Summer 2018. To order a copy and subscribe, visit outdoorgroupstore.com.