It is hard to believe at times that it has been almost 11 years since Walther launched its popular PPQ pistol. I am dating myself, but I remember working with it just before release and thought it was a pretty darn solid shooter. A decade and change later, Walther has taken all its customer feedback, mixed it with its engineering prowess and created the Walther PDP Full Size 9mm pistol. 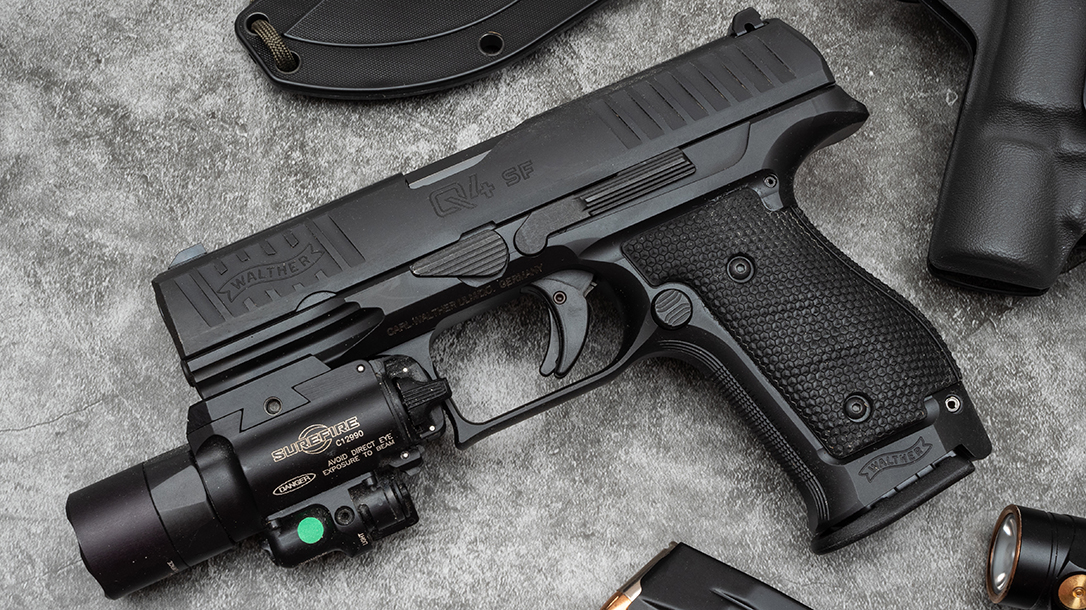 Using the PPQ as a base, Walther launched three versions of the new Full Size gun. A 4-inch, 4.5-inch as well as the one I am most interested in, the 5-inch model. I had the opportunity to get my hands on the new PDP Full Size during the recent Athlon Outdoors Rendezvous in Idaho.

Walther brought a variety of guns to peruse, but I only had eyes for the new 5-inch PDP. I had been given the top secret heads up that Walther would have one there and I promptly made a beeline to its station. I really like the PPQ and was excited to see where Walther had taken it. My excitement would not be wasted.

Walther built the new PDP around what I consider to be the future of handguns. Pistol design now incorporates the use of a red dot optic. All the new versions of the PDP come optics ready with a variety of mounting plates to fit just about any major optic on the market.

Walther goes much further than that though and has designed the gun with what they are describing as “Red Dot Ergonomics.” This boils down to a design that enables the shooter the ability to maximize the benefit of utilizing a red dot on their pistol.

Most notably for me, was the good feel of the grip in my hands. Walther has designed the PDP with a deeper sweep at the bottom of the mag well and included deeper thumb depressions on the sides of the gun.

They have also designed noticeable palm swells on the grips and flattened the back of the grip out slightly. One final change in comparison to the PPQ is the elimination of the finger groves which I feel is a solid decision.

The PDP comes with what Walther has dubbed Performance Duty Texture on the grip. I found it similar to the Q4 and Q5 steel frames, but it utilizes moldings instead of panels. It delivers a good balance between grip and grief. I was able to maintain a solid purchase on the gun, but it was not so aggressive that it chewed my hands up.

The slide has a very unique look as Walther has gone with some serious serrations on the gun. Called Super Terrain Serrations, they are aggressive and actually come above the surface of the slide. The benefit of this is absolute positive grip as you manipulate the slide. No slipping whatsoever. Walther bowed to the fact that many people will install their own sights and as such, they used Glock template sight cuts. This leaves the owner a wide variety of aftermarket options to choose from.

Performance wise, the gun is a shooter. While limited on time, I was able to get a very good feel for the gun. In fact, I caused some nervous laughter as I went through magazine after magazine with the gun. Burning up one of the most critical and rare resources we have right now – ammo. I eventually yielded my range spot to the next team but not before making an observation about the trigger.

The trigger breaks at about 5 pounds, yet the first stage of the trigger is much lighter than what I experienced with the PPQ. The trigger Walther is using is its Performance Duty Trigger and I liked it. The “wall” that we hit in the press proved much easier to push through, and as such I got much more trigger control. I also found the reset to be better than the PPQ. The gun was a tack driver and simply felt good in my hands.

Walther has done a great job with its next evolution and by releasing a variety of sizes, including the PDP Compact (reviewed here by PersonalDefenseWorld.com), it is certain to be a hit. Factor in an 18-round magazine capacity and the Walther PDP Full Size becomes a blaster to be reckoned with. For even more info, please visit waltherarms.com. Also, for some range time with the PDP line, check out some video on BallisticMag.com.