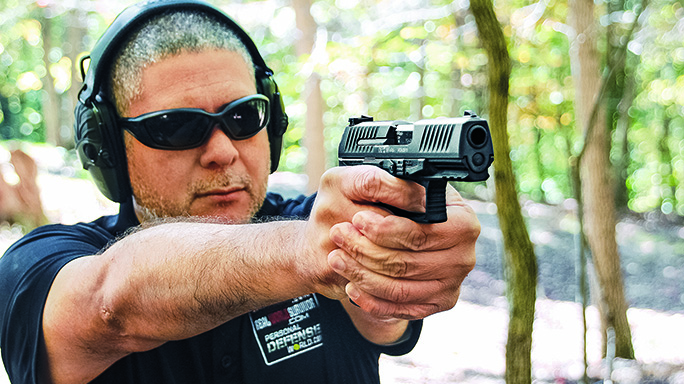 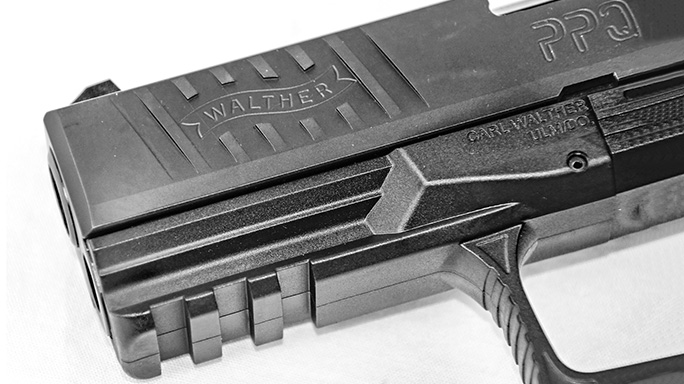 2 of 6
PPQ 45: Walther’s First .45 ACP Pistol
The accessory rail molded into the frame makes it easy to add tactical lights or lasers. 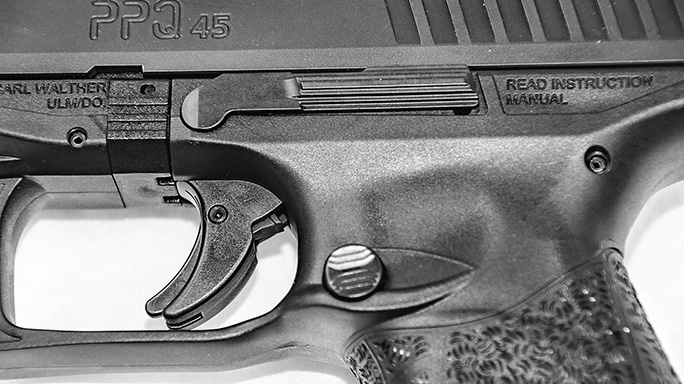 3 of 6
PPQ 45: Walther’s First .45 ACP Pistol
The extended slide release is ambidextrous while the push-button magazine release is reversible. 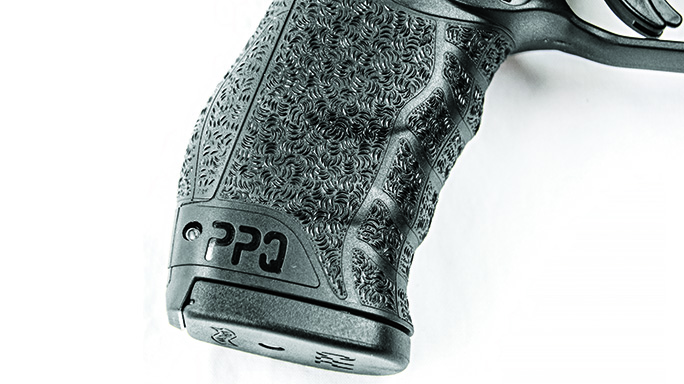 4 of 6
PPQ 45: Walther’s First .45 ACP Pistol
The grip is aggressively textured, and the gun comes with two interchangeable backstraps. 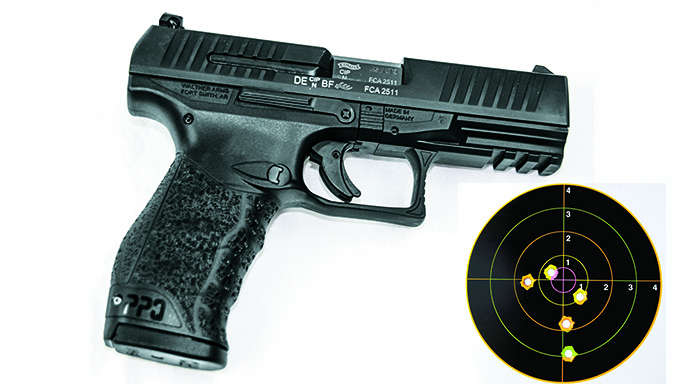 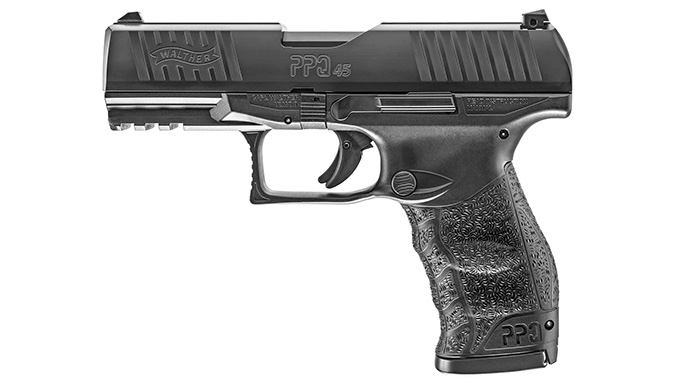 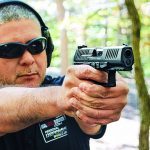 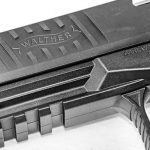 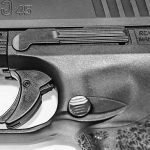 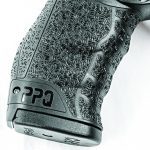 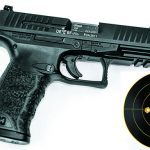 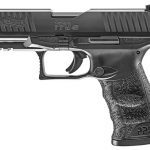 The .45 ACP round was developed out of a military need to have a more powerful pistol round. Curiously, European militaries seemed satisfied with their 9mm pistols. Now, the 9mm is a perfectly good round, but in America, bigger is better, and nothing is ever going to replace the flying ashtray that is a hollow-point .45 ACP.

Walther Arms is an iconic German arms-maker that has been making inroads into the U.S. market for some time. Last year, the company introduced the Walther PPQ M2 in 9mm and .40 S&W with several modifications from the original design to better appeal to American shooters. Specifically, the traditional triggerguard-mounted magazine releease was replaced with a much more American-approved push-button release mounted on the grip. While it’s not ambidextrous like the previous iteration, it is reversible.

Now, to further appeal to American shooters, Walther has produced the first .45 ACP pistol in the company’s long history, the Walther PPQ 45.

This striker-fired, polymer-framed pistol uses a 12-round magazine and comes with two interchangeable backstraps—large and small—allowing shooters to customize the grip to fit their hands better. The black polymer frame features an extremely comfortable and well-fitting grip with an aggressively textured cross-directional design all around that helps keep the gun firmly in hand but does not chafe. There is also a lanyard loop for military or police use and slight finger grooves at the front.

There is no manual safety, and as such the exterior controls are reduced to the trigger, the magazine release button and the 2-inch-long slide release, which is ambidextrous. There are three internal safeties designed to prevent the gun from being fired unless the trigger is depressed, including a firing pin block. The polymer trigger face features a release tab similar to other striker-fired pistols, which provides additional safety. The front of the large triggerguard is squared off and serrated, and the front of the frame has a Picatinny accessory rail for the easy installation of tactical lights or lasers.

The steel slide and barrel are Tenifer coated. This process, technically called salt-bath ferritic nitrocarburizing, provides a permanent finish that has greater resistance against friction and almost twice the corrosion resistance of stainless steel or chrome. The slide features large serrations at the front and rear for improved control when manually cycling the action. The pistol also has an enlarged ejection port for improved extraction and reliability.

The polymer, three-dot sights are adjustable. The rear sight is windage adjustable while the font sight can be adjusted for elevation by removing and replacing it with front sight posts of different heights. The top of the slide is also ridged to prevent any glare from obstructing the sight picture. The sights feature a low-profile, snag-free design for a faster draw, and they can be replaced with metal, self-illuminating sights.

This s a full-sized duty pistol with a 4.25-inch barrel featuring polygonal rifling. With traditional rifling, the bullet does not make contact with the bottom of the grooves and leaves a gap as it travels down the barrel. This can allow some gas to escape unevenly ahead of the bullet and increases barrel fouling. Polygonal rifling uses a flattened hexagonal pattern that appears very smooth. This type of rifling also results in a thicker and stronger barrel, extending the barrel life. This smooth design also allows the bullet to make full contact with the barrel, improving accuracy by reducing bullet deformation and increasing bullet velocity.

Another of the more distinct features of the pistol is its extremely well designed trigger. As the action completely pre-charges the striker, the trigger has a very smooth and light operation. This is what Walther describes as its “Quick Defense” trigger. It is a two-stage trigger, although on the range it felt almost like a single-stage trigger thanks to its incredibly smooth operation. The trigger travels 0.4 inches to break at a very crisp 5.6 pounds before travelling a super short 0.1 inches to reset. Also, it should be noted that the pistol does not have a second-strike capability.

On the range, the Walther PPQ 45 performed well. Despite the pistol’s large size, its grip is only 1.3 inches wide. The shape and contour of the grip, as well as its texturing, fit the hand very comfortably. This is still a .45 ACP pistol, however, and that is a fact that becomes immediately noticeable when it is fired. The recoil was comfortable but stout with plenty of muzzle flip, making high-speed drills more challenging. It should be kept in mind that a full-sized 1911 weighs almost 32 ounces unloaded while the PPQ 45 weighs only 28 ounces unloaded. This may not seem like a significant difference, but it is the main factor in the added felt recoil of the gun compared to a 1911. Of course, that weight savings does also make the PPQ 45 a lot more comfortable to carry all day.

In terms of performance, I encountered absolutely no failures of any sort during off-hand firing. Since this is primarily a defensive pistol, I stuck with using full-power 230-grain hollow-point loads from three different manufacturers. To measure its accuracy, I tested the PPQ 45 from a stable benchrest at 25 yards. Here I did experience two malfunctions, a failure to feed and a live round ejected (the last in the magazine). I believe that these are attributable to the benchrest causing me to ride the recoil (limp wrist) and not any issue with the gun itself.

This pistol was set to fire at the 6 o’clock position at 25 yards. The accuracy results were good, with the average across all groups and types of ammunition measuring about 3.5 inches. There was also a slight need to adjust the rear sight, as shots were trending about 1 to 2 inches to the left. For a defensive pistol, I prefer the sights to be set at the point of aim instead, and this can be adjusted by replacing the front sight. Of course, replacement front sights are available from Walther. I also found the trigger to be outstanding and extremely crisp, making accurate shots much easier.

The Walther PPQ 45 is extremely well made, as one would expect from such a high-quality company. The standard PPQ in 9mm is in fact the duty pistol for the German police. It may seem like a surprise that Walther has never produced a .45 ACP pistol before, but sometimes good things are worth waiting for. Granted, this pistol may not be for everyone, especially the recoil sensitive or those with very small hands, but there is something undeniably attractive about having 12+1 rounds of .45 ACP ammo at your fingertips.

While the PPQ 45 is a bit large for concealed carry (although that is not inconceivable and many people do conceal carry full-sized 1911s), it seems that the best role for the pistol is in home defense or duty use.

This article was published in the 2016 edition of the Complete Book of Handguns. For information on how to subscribe, please email [email protected]outdoorgroupmags.com or call 1-800-284-5668. 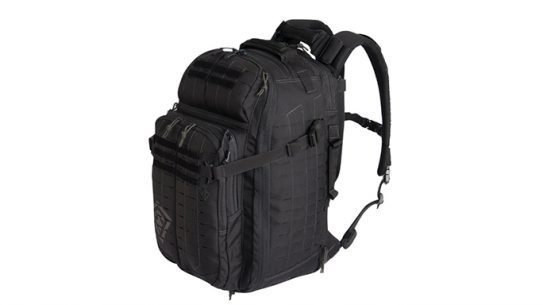 The Tactix 1-Day Plus Backpack from First Tactical features a grand total of seven...