by Mike Detty
in Guns, Handguns
0

Standing on frozen grass while snow and sleet spit on me, I stomped my feet and rubbed my hands, vigorously trying to warm them. The temperatures weren’t that low at the U.S. Shooting Academy in Tulsa, Oklahoma, this past December, but the humidity was high, and the combination was miserable. Walther Marketing Manager Cody Osborn had assembled a group of gun writers at a quiet pistol bay to make an important pre-launch announcement. 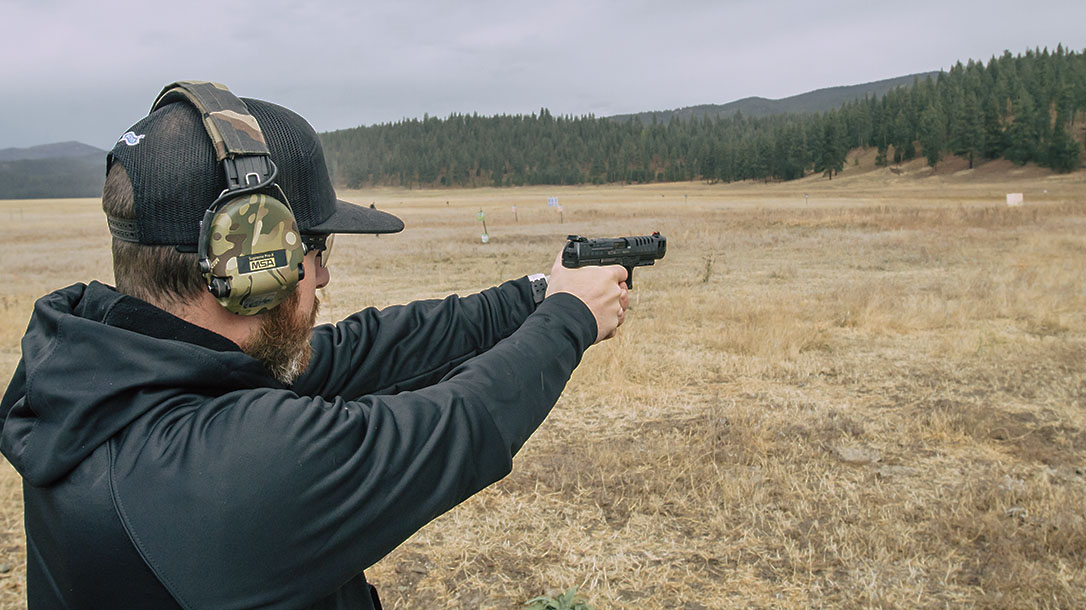 VIDEO: How Fast Is the Walther Q5 Match Pistol?

“Our goal is to push the performance limits of our flagship PPQ product family beyond what is possible in a polymer-framed gun. We’ve invited you here to see and shoot our brand-new Q5 Match SF pistol—a steel-framed version of our already popular polymer-framed Q5 Match gun.”

Walther introduced the Q5 Match a couple of years ago. It has since proven popular with both USPSA and IDPA competitors. The first Q5 was modeled after the 5-inch-barreled PPQ, which found its way into competitive circles. Walther decided to build a dedicated match gun with a longer sight radius, phenomenal balance and a no-compromise match-grade trigger. The longer slide was cut with ports to give the gun a rakish look and the ideal cycling speed for light 9mm loads.

For those who wanted to shoot in the USPSA’s Production division, the gun was given a fiber-optic front sight and an adjustable rear sight. And for those who want to compete in the Carry Optics class, the gun comes with three different mounting plates to accommodate the most common reflex sights. All in all, the Walther Q5 Match gave competitors a “match-ready” gun for less money than most folks spend on a stock 1911 out of the box.

But the Q5 Match weighs just 27.9 ounces unloaded, which makes the gun a little too “lively” for most shooters. After listening to its professional shooters and a host of unsponsored Q5 users, Walther decided to up the Q5’s game.

The result is the Q5 Match Steel Frame (SF). It weighs in at a hefty 41.6 ounces unloaded, and that extra weight makes for a significant reduction in felt recoil. This in turn makes it easier for shooters to get back on target quickly, and their splits, or time between shots, are dramatically reduced. And in a game measured in fractions of seconds, every bit of time saved adds up. Walther is currently offering two different versions of the Q5 Match SF: the Standard and the Pro. The only real difference between the two is that the Pro model comes with a magazine well funnel and three magazines fitted with +2 basepads.

Walther had set up several USPSA-type stages in different pistol bays at the U.S. Shooting Academy, and the company’s pro shooters ran us gun writers through each stage using the Q5 Match SF. The stages were simple and uncomplicated, with few targets obscured by hard cover or no-shoot targets. The idea was to let us push our limits in terms of speed. Unfortunately, most of us were hampered by the cold.

But one thing was certain: The new Q5 Match SF is a flat-shooter. It was easy to quickly double-tap close targets, and the sights never seemed to move off target. Shooting a heavy steel-framed gun with relatively light loads made us all look good and created a very enjoyable experience, despite the cold.

A couple of weeks later, I received a test sample so I could give the gun a more thorough evaluation. The Q5 Match SF arrived in a foam-lined plastic with three magazines, a magazine loader, three optics plates, a sight adjustment tool and a cable lock. One of the first things you’ll notice about the gun is its long dust-cover rail. At the other end is a beavertail that extends past the rear of the slide. The ambidextrous slide release has low-profile levers that inset into the frame.

The slide and frame both have a black Tenifer finish to stand up to a competitor’s hard use and thousands upon thousands of presentations from the holster. The flattop slide is serrated. The fiber-optic front sight is not dovetailed, but attached via a screw from inside the slide. Walther machines ports into the front of the slide, claiming they help cool the barrel, but I think most shooters will find them to handy for manually loading the chamber or doing a press-check.

Of course, the heart and soul of this gun is the steel frame, which gives the gun its recoil-absorbing weight. Dimensionally, it is very close to the Q5’s polymer frame, but there are some important differences. You’ll notice that there is a takedown lever on the left side of the frame instead of the bilateral takedown tabs on the polymer gun. Most of the other parts will interchange between the two guns, including the magazines.

One of the considerations of the Q5 Match SF is ergonomics. The graceful arch of the backstrap forces the shooter’s hand high up into the beavertail. Combined with the undercut at the junction of the triggerguard and frontstrap, this allows the shooter to get a very high hold on the gun to aid in fighting recoil.

The barrel uses polygonal rifling, which is a huge selling point for competitors. Instead of sharp lands and grooves, the rifling uses a series of hills and valleys to impart twist on the projectile without cutting into its jacket. There are a number of claims that could be made, including the better gas seal with the bullet and a concomitant increase in velocity. Other benefits include less chance of bullet deformation, a longer barrel life, increased accuracy and ease of cleaning.

But the rifling isn’t the only thing different about the Q5’s barrel. Walther cuts its chambers a little differently. According to Cody Osborn, “We actually use a step chamber. About the first 75 percent of the chamber is loosely fit so it feeds reliably. The last 25 percent actually steps down so we get a lot higher velocities out of this gun. This makes the gun run cleaner and gives us tighter groups. There will actually be a 25-meter target in the box shot by a Walther technician at the factory so you can see your accuracy.”

My test gun came with a target showing a 1.68-inch group at 25 meters, and inspecting spent casings during the evaluation revealed a consistent mark about 0.25 inches from the mouth of the case down. But this should in no way affect the number of times these cases can be reloaded.

The barrel’s 5-inch length also allows for a more efficient powder burn compared to most service-sized 4-inch-barreled guns, and this translates into velocity for a sport where the minimum “power factor” is determined by bullet weight and how fast it goes. But the longer barrel length also creates a longer sight radius—another important factor in being able to shoot accurately.

The Q5 Match SF has a bright blue trigger that contrasts nicely with the rest of the black gun. Walther states that the trigger breaks at 5.5 pounds, but my test sample’s trigger broke consistently at 4.7 pounds. I would have guessed the trigger pull to be closer to 3.5 pounds based on how light and crisp it felt. Rest assured that as the gun’s popularity increases, there will be a variety of aftermarket kits available to bring the pull weight down to Grand Master liking! The reset on my gun was firm and only took about 0.1 inches. Also, like most current striker-fired guns, the Q5 Match SF has a safety blade in the middle of the trigger, preventing the gun from firing unless the trigger is purposefully pulled.

To measure the Q5 Match SF’s accuracy at the range, I fired five-shot groups from 25 yards using my DOA Shooting Bench for support and resting the pistol’s dust cover on my Millett BenchMaster. The frame rail made it rock-steady on my rest. All I needed to do was maintain a sight picture as I added pressure to the trigger until the shot broke.

Federal’s 115-grain Syntech TSJ rounds delivered the best five-shot group at 0.98 inches. My best group with the 150-grain TSJs was just slightly larger. We used these 150-grain rounds at the Tulsa event. They’re probably the best choice for competitors who don’t handload, with light recoil and the perfect slide velocity. All of the rounds I tested performed flawlessly, and there were no failures to feed, cycle or eject. Even the slide lock worked perfectly and without failure, locking the slide to the rear when the last round was fired.

I set up a USPSA target at 10 yards and fired double-taps at it, counting only my A-zone hits. I am many years removed from being an active competitor, and I’m hesitant to even publish my results. The splits of a double-tap are indicative of the shooter’s skill rather than the pistol’s capabilities. But most of my splits ran between 0.19 and 0.21 seconds. In more practiced hands, I am certain the splits would run closer to 0.15 seconds, or lower. In any event, it’s obvious that the Q5 Match SF is capable of taking anyone to the highest levels of competition.

At the end of our range session in early December, Cody Osborn said, “Walther’s Q5 Match SF won’t be the only PPQ family member to benefit from the steel frame. Standing for Police Pistol Quick Defense, the steel-frame PPQ platform will grow into a full product family supporting the competition, duty and tactical self-defense customer. The steel-frame product family will showcase the highest level of quality and precision engineering that only Walther is capable of providing. The Q5 Match SF is just the beginning!”