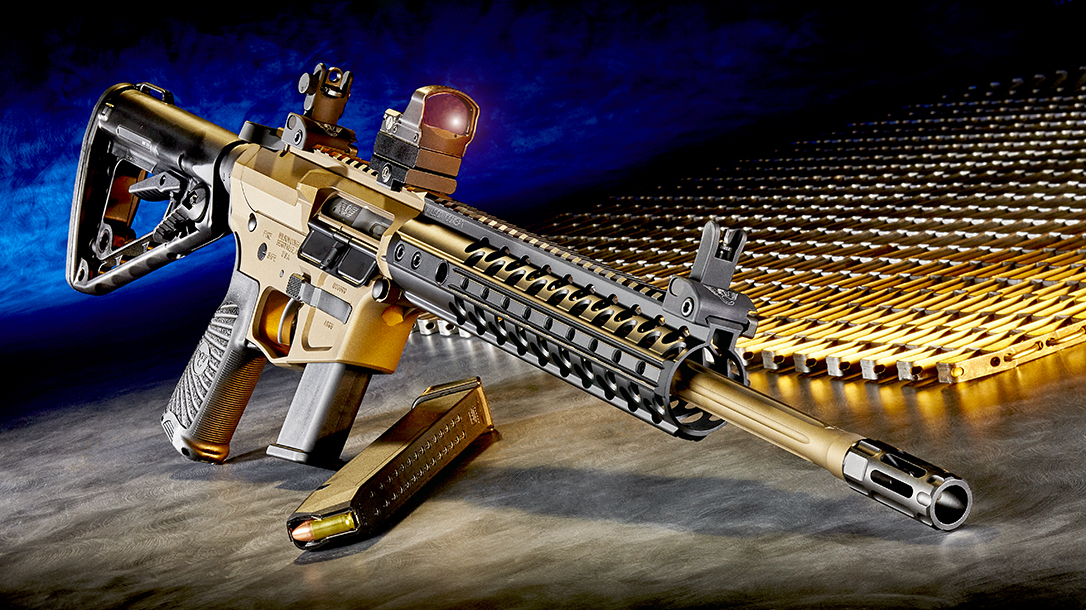 If you couldn’t figure it out, the new model has a Vertec-grip frame conversion.

The Vertec has all of the same features as the Brigadier Tactical model, such as: the 92A1 round trigger guard; a dehorned slide; an oversize mag release; a Skeletonized Elite II hammer; and a Trijicon tritium front sight.

The 92G Vertec frame is then modified in-house by Wilson. This modification straightens and reduces the size of the frame, making it more appealing to shooters with smaller hands or those of us that are more accustomed to shooting a 1911-style frame.

Wilson then checkers the frame front and rear, following basically the same pattern as a Beretta 93 model. Once the gunsmithing is complete, the frame is refinished in matte Black Armor Tuff and dressed with tasteful Black Cherry G-10 grips.

The Vertec also comes with a magazine guide and an action tune, which is eerily smooth.

I tested the Wilson Combat 92G Vertec at the 2018 Athlon Outdoors Rendezvous in Montana. If someone was keeping track, I would not be surprised to learn that of all the pistols I shot that day at the range, that I shot the Vertec with the most accuracy.

I would say that I have average-sized hands for a 6-foot guy. However, since I am used to a 1911 style grip, the thinner profile with the straight rear frame felt right. Rounded rear frames have a tendency to feel like they are pushing too heavily into the meat below the thumb on my right hand; that can make me come up a little high on target when I am bringing a pistol up from a draw. I didn’t notice this with the 92G Vertec.

A thinner frame is also helpful when wearing gloves, which was the case for quite a few shooters on the range in Montana due to the cold temperatures mixed with rain and a brief moment of snow.

Montana seems to have a tendency to get colder as the morning progresses — which doesn’t make a lot of sense to my Arizona temperament — and wet cold metal cuts right to bone. So in cases like this — and real world carry situations where conditions aren’t always perfect — having a handgun that doesn’t feel too bulky with gloved hands is important. This also goes for being able to fit a gloved finger into the trigger guard without issue.

Overall, in my opinion, the 92G Vertec is an improvement on the Brigadier model. It feels better in my hands and gets on target quicker. And, for visual people like myself, I think it looks better. I like curves on women, not guns.

In the words (mostly) of Ferris Bueller, “I love shooting it. It is so choice. If you have the means, I highly recommend picking one up.” It is, however, a limited production, so get moving.