by Michael Humphries
in Guns, Handguns
0

“Is Smith & Wesson committed to the law enforcement community? Absolutely,” responded Officer Lewis Crabtree of the Hartford, CT Police Department. “They are unbelievable to work with. You tell them what you need, and you get it,” he continued.

The Hartford Police Department employs roughly 400 officers to police a city of more that 100,000 residents. “When it comes to the firearms of the department, I pretty much do it all. I am the rangemaster, armorer, trainer, etc.,” he pointed out. The Hartford PD has a long history with Smith & Wesson, having had its officers armed with Third Generation Model 4506 pistols since the early 1990s. However, they have recently switched over to the newest M&P—the .45 ACP variant with the optional ambidextrous safety.

When asked why they switched, Crabtree said it was not because of dissatisfaction with the 4506s. “Those are great guns, but we had been running them a long time. The department just needed to update its pistols.”

Crabtree was given complete latitude by his Chief to find the best pistol for the department. Money was not a concern and he tested practically everything that was available. “I tested guns for the past four years, and once I got my hands on the M&P, I was immediately impressed,” he said.

However, the initial 9x19mm and .40 S&W chamberings of the M&P series were a consideration for the department. “We issue .45 ACP pistols, and we did not want to stray from that,” he says. Once he learned that a .45 ACP variant was coming, he put the upgrade on hold.

Why did the M&P stand out for him? “The M&P is utterly reliable,” Crabtree answered. “If I were going into a house to respond to a threat and could have only a handgun, this one would be my choice,” he reiterated. He talked a great deal about the out-of-the-box reliability of the M&P series as a whole.

New Design Features
However, it is more than simply the reliability of the system that appealed to him. The design of the pistol itself from the ground up is just as much a part of the appeal. Joe Bergeron, Smith & Wesson’s handgun manager, put it best when he stated, “The M&P is all about providing a complete and ready-to-go package to the end user.”

Bergeron indicated that as of August 2007 more than 200 law enforcement departments are using the M&P pistol and that nearly 200 more are currently testing it. He further stated that the M&P series is running at an adoption rate of roughly 80 percent among those agencies who tested it. Impressive numbers.

What about the series of pistols makes it so appealing to them? First, the U.S.-made pistol was designed with the input of LE operators. The pistols feature excellent ergonomics, with an 18-degree grip angle and a low bore axis. It features an ambidextrous slide-stop release and a reversible magazine release.

Until recently, the M&P series did not have a manual safety option, instead relying on the inherent safety of its constant-action trigger pull system. Now, the new M&P .45 ACP can be acquired with an optional trigger-blocking ambidextrous safety that is located in the traditional M1911 position at the rear of the frame. A simple sweep down and the safety is off; a sweep up and it is on. One significant way in which it differs from an M1911-style safety is the fact that it does not lock the slide when engaged. “We wanted a safety system that could be left engaged while the slide is manipulated,” Bergeron explained. “This way, you have the ultimate in safety when clearing or loading the pistol,” he continued. He also noted that in the future this feature will be available on all chamberings. 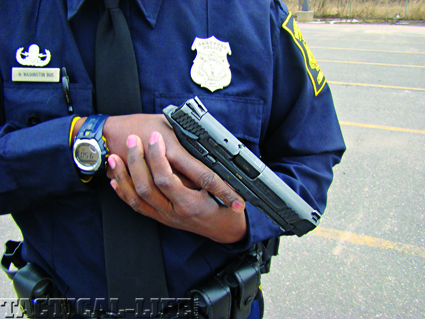 Crabtree told me that when he saw the thumb safety version of the .45, he knew it was the gun they needed. “I liked the positive operation and the fact it was positioned like an M1911 safety,” he said.

Crabtree is quick to add, that he does not believe the M&P is an unsafe pistol without the safety: “The constant-action trigger system is great on the M&P pistols, and it is backed up by their passive trigger and striker-block safeties. As a matter of fact, it was one of the features that made me consider the pistol series in the first place.” Although he is a big fan of the 4506 pistol, the differing trigger pull of its traditional double-action system of operation from the first to second shot required extra steps of training. The M&P’s system of a constant trigger pull from shot to shot potentially makes training easier and can yield better scores.

Crabtree has transitioned over 75% of the officers to their new M&P pistols (fitted with Novak night sights) and is very happy with the results. “The pistols are performing perfectly,” he told me. The department issues Federal HST +P 230-gr. ammunition for them to carry and Winchester 230-gr. ball ammo for practice, and the M&Ps are apparently digesting all of it with gusto.

Crabtree related a story to me about one of the Hartford officers that was able to release the magazine from his Model 4506 as it was being pulled from him during a struggle, thereby locking up the pistol. Crabtree also noted to me that, just as with the manual safety, his officers were trained on a pistol with this feature and he wanted to stick with  a magazine disconnect.

There is another element to the safety mindset behind the design of the M&P pistol: Unlike pistols that require the trigger to be pulled to disassemble the pistol, the M&P has a lever that must be rotated downward to unlock the pistol for disassembly, located inside the frame near the top of the magazine well. The result is a disassembly procedure that must begin from a slide-locked-open position—an inherently safe approach.

This was a particularly appealing feature to Crabtree when he was evaluating the pistol. “While I know there is no substitute for basic safe gunhandling procedures, I don’t see anything wrong with making the system and procedure for takedown as safe as possible. When I discovered this feature, I was really impressed,” he stated.

Not Just Skin Deep
Mechanically, the pistol is engineered in ways that would also make it appealing to a department—particularly its armorer. Within the polymer frame of the M&P is a removable stainless steel chassis that connects the locking block and sear housings. Incidentally, the front and rear slide rails are attached to the locking block and the sear housing, respectively. The result is a pistol in which the modular design allows an armorer to fix most potential problems in-house rather than having to return the pistol to the factory.

“The removable chassis is great,” Crabtree told me. “In the unlikely event of a broken frame rail, I can simply swap out the part myself. This is much more complicated on a pistol in which the steel rails are embedded in the frame,” he continued.

Ready To Go
The modular nature of the pistol makes it adaptable to the needs of just about everyone who would use it. For example, not everyone has the same sized hand, thus some with either large or small hands have trouble comfortably holding some pistols. Smith & Wesson’s solution to this was to develop an interchangeable grip system. This is not just a simple backstrap-swapping system: they went the extra step and designed a full backstrap and palmswell insert that can be changed, making for a pistol that can adapt the size and bulk of both the back and sides of the grip area. Each pistol comes with a small, a medium and a large insert.

This was a feature that made the pistol appealing to the Hartford P.D. While Crabtree has found that the medium-sized inserts suit the majority of officers, the option of changing it for the others is worthwhile. “We had a female officer who had a great deal of trouble reaching the trigger on her single-stack 4506. Once we got her using the M&P, we simply attached the small insert and it fit her perfectly—and this was on a high-capacity .45 ACP,” he stated. On the other end of the spectrum, he had officers with larger hands putting oversized wraparound grips on the 4506.

The way the inserts work is quite simple. A retaining pin goes up through the rear of the butt of the pistol and is removed by twisting its polymer base piece located to the rear and bottom of the magazine well. Once this pin is removed, the inserts simply hook in and out of the rear of the frame. The retaining pin is designed as a tool to aid in disassembly as it can be used to reach down into the open ejection port of a slide-locked pistol and engage the sear-deactivation lever.

The new M&P has universal rail located on the dustcover, allowing users to mount a variety of accessories.

A New Tradition
Has Smith & Wesson recaptured the spirit of the original Military and Police with its new M&P series of semi-automatic pistols? I think so. With just about every modern feature you could want in a contemporary pistol, combined with cutting-edge engineering and design, the new M&Ps are ideal for both communities.