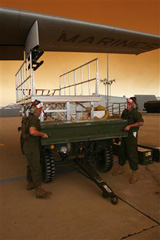 Personnel from Navy Air Test and Evaluation Squadron 20, took off from Air Force Plant 42 on its first flight with the new “Harvest Hawk” mission kit. Since the introduction of the original C-130 more than 50 years ago, the Harvest Hawk mission kit program marks the first time the Marine Corps will have the capability to fly an armed Hercules into the fight.

The retrofitted KC-130J will use an AN/AAQ-30 Targeting Sight System located under the left wing’s external fuel tank to give the fire control operator eyes on target from more than several thousand feet away. Lockheed Martin equipped the aircraft with a AGM-114P Hellfire II weapons rack, in place of the left-hand aerial refueling pod, that can carry a maximum of four air-to-ground Hellfire missiles for close-air support.

A fire control operator will manage the new targeting sight system and weapons from a removable cargo platform mounted fire control station. The flexible design feature allows Marines to take off the mission kit and mount it onto another modified Super Hercules between flights. This means the squadron can still provide surveillance and close air support if only one modified aircraft is available.

“The Harvest Hawk mission kits will usher in a new era of Marine aviation, bringing a more versatile aircraft into the fight,” said Maj. Jeffrey P. Pellegrino, the KC-130J requirements officer, Aviation Requirements Branch, Headquarters Marine Corps. “It’s a flying Swiss Army knife, and we must continue to take advantage of its versatility. This mission kit will bring tremendous agility and flexibility to the MAGTF commander.”

The right wing can still carry fuel for aerial refueling while the left wing carries the kit, retaining the Marine Corps’ standard of versatility. The Corps intends to provide three systems to each KC-130J squadron. However, Lockheed Martin plans to retrofit the Marine Corps’ fleet of KC-130J aircraft with the necessary wiring to carry the new system.

The aircrew conducted a three-hour check flight to examine systems that did not pertain to the additions. In the fleet, aircrew perform operational check flights on the aircraft that have not flown for 30 consecutive days to ensure the main systems function properly. Not only was it the first time the Marines flew it with the new kit, it was also the first time Marines operated it since VMGR-352 brought the KC-130J to Palmdale in May.

“It was a good flight, I couldn’t even tell the difference with the new system on,” said Maj. Steve D. Puckett, a test pilot with VX-20 and one of the first pilots to fly with the Harvest Hawk kit. “We had to make sure there were no surprises and evaluated what’s been developed so Marines operating in the fleet know how it works.”

Marine Corps aviation took the next step in battlefield capabilities, when a KC-130J “Super…