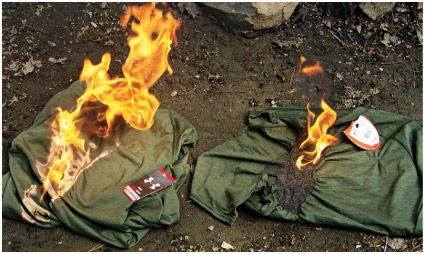 Synthetic tactical t-shirts have to provide more than just moisture-wicking properties to be considered acceptable for military and law-enforcement tactical use. In 2006 the Marine Corps banned troops from wearing non-fire-resistant synthetic clothing while on tactical operations because the clothing can melt, drip and compound injuries when exposed to very high heat.

In response to the ever-growing demand for synthetic t-shirts that are fire resistant and fire retardant, many companies are offering clothes that claim to possess those properties. The August 21, 2006 issue of the Marine Corps Times tested five flame-resistant tactical t-shirts and chose a shirt from Potomac Field Gear (PFG) as the winner, based on smell, drying, shrinkage, comfort and tactical value.

Now Under Armour (UA) has joined the growing ranks of companies offering tactical t-shirts with fire-resistant or fire-retardant properties. As part of UA’s effort to extend its reach to the tactical military and law enforcement gear arena, the company recently added a flame retardant long-sleeve t-shirt to its line of tactical heat gear. The fabric is noticeably thicker and has a different feel than the standard you are used to seeing at the sporting goods store. But how does it perform?

To find out if it performs and to see how its flame-retardant properties compare, a test was devised to compare the new UA shirt with a shirt from PFG.

At first glance, the shirts seem like similar products. UA promotes its shirt as being fire-retardant, durable and offering “odor-free moisture transport.” PFG advertises its t-shirt as fire-resistant, moisture-wicking, anti-odor, anti-microbial and anti-static.

The fabric on both shirts feels more like cotton than does a standard synthetic shirt, though neither is an exact match for the natural fiber. The UA fabric is considerably heavier than the PFG fabric—so much so that it caused me to wonder how it would wear and breathe on a warm day.
To test the fire-resistant/retardant and moisture-wicking properties of both shirts we exposed them to two three-part fire tests, plus sweat, odor and comfort tests.

The Real Firefight
For starters, let’s get the record straight between “fire resistant” and “fire retardant.” PFG promotes its shirt as fire resistant. Dictionary.com defines fire resistant as “totally or almost totally unburnable.” UA promotes its new shirt as fire retardant. Dictionary.com defines retardant as “able to slow or check the spread of destructive fire.”  While these are not identical claims, the properties described are close enough to merit a head-to-head test.

Near flame: When placed next to, but not in direct contact with a flame, both shirts performed similarly. Both shirts charred lightly in the small area that was exposed near the flame but in no other area. The shirts did not catch on fire, melt or drip.

Direct flame: When exposed directly to a flame the shirts performed differently. The UA shirt charred heavily in the area exposed directly to the flame and a small, pin-sized hole developed. The area of the PFG shirt exposed directly to the flame simply disappeared, creating a hole in the shirt. It didn’t melt or drip.
With an accelerant: Both shirts were sprayed with an equal amount of an accelerant and lit on fire. Both shirts immediately caught on fire. The fire on the shirt from PFG extinguished 10 seconds before the shirt from UA extinguished. The fire did not spread to any area on either shirt that was not sprayed with the accelerant. Both shirts where heavily charred from the fire. Neither shirt melted or dripped in any way.

FIRE TEST PART 2
For the second fire test I duplicated the first fire tests on new shirts with one exception—I placed a 4-pound chicken inside each shirt during the tests. I also tested a standard shirt during this test to see if the reports and concerns about them melting and dripping when exposed to fire were true.

Near flame: The PFG Fire Resistant and UA Fire Retardant shirts performed the way they did during the first round of fire tests. The chickens were not affected by the near flame test. The non-FR UA shirt developed a small whole with a heavily charred perimeter when exposed near a flame for five seconds. This chicken was also unaffected by the near-flame test.

Direct flame: Here again, the PFG Fire Resistant and UA Fire Retardant shirts performed the way they did during the first round of fire tests. As far as I could see, both chickens were still unaffected after being under the shirts while the shirts were exposed to five seconds of direct flame. The non-FR UA shirt developed a second hole when exposed to five seconds of direct flame. There was a small char on the chicken skin that was directly under the shirt where it was directly exposed to the flame.

The non-FR UA shirt continued to burn long after the others went out and melted directly onto the skin. This test validated the reports about them melting and dripping. It’s no surprise that the military doesn’t want troops wearing these on operations.

The Sweat Test
As a guy who’s been known to sweat while ice fishing, I take my moisture-wicking t-shirts pretty seriously. To test the moisture-wicking properties of the shirts I wore both over four days while doing identical workouts.

The Results
PFG’s t-shirt wicked moisture away and dried very well. If I had to compare it to anything it would be to traditional warm-weather synthetic t-shirts that are part of my normal workout collection. It was a very comfortable shirt for warm-weather activity.

The UA shirt is a different story. As mentioned earlier, the weight of the fabric on the UA shirt is considerably heavier than the weight of the PFG shirt. While it did wick moisture off my skin, by the end of the workouts it felt more like I was wearing a wet, light to mid-weight towel than a tactical t-shirt designed for active use in warm weather.

Comfort Test
The day-to-day comfort of apparel is an issue that any officer will attest is a big part of their professional “quality of duty life.”  We put the UA shirt and PFG shirts through a day in the life of a Community Police Officer—Bike Patrol Division. Both shirts were worn for one shift on similar weather days—sunny, 75 degrees and mild humidity. The UA FR t-shirt was dramatically “bulkier” than a standard undershirt and at the end of the shift, was not truly dry. On the scale of one to 10 this shirt was rated a 5. The PFG shirt was a comfortable fit and at times you did not realize you were wearing it. Moisture control was excellent during the testing—the shirt was rated a 10 for this test.

The Odor Test
Remember that I didn’t wash the t-shirts between workouts? Here again there was a clear difference. PFG’s t-shirt exhibited less odor after two sweaty workouts than the UA t-shirt did. PFG claims to use something called X-Static Anti-Odor Technology in its shirts and, whatever that is, it showed. If I had to pick a t-shirt knowing that I wouldn’t be able to shower for several days while being physically active in a hot environment, I would go with the shirt from Potomac.

Conclusion
It should be emphasized here that shirts from Potomac have been chosen by the Marine Corps for its Fire Resistant Organizational Gear Generation One program. Based on that, I have to assume that the properties exhibited during the fire tests by the PFG shirt are the properties that the military deems acceptable.
A closer look at the PFG website shows claims that the shirt will “self extinguish once the source of ignition is removed” and is “certified as non-melt and non-drip.” Our test certainly indicated that this is true. Our test indicated that this is true of the UA Fire Retardant shirt as well.

The PFG shirt had a clear advantage when it came to handling moisture. While the UA shirt did wick moisture, it did not do it as well as the shirt from PFG and, as mentioned above, it felt like I was wearing a wet light- to mid-weight towel at the end of my workouts.

The PFG shirt is also anti-static. The Potomac web site claims that “the fabric can take a 5,000 volt charge and decay it to 500 volts in .01 second… enhancing its safety in explosive, fuel rich and sensitive electronic environments.” We don’t have access to the technology to test these claims, but again, the shirt has been approved by the Marine Corps, and they do, so we’ll go with the Marines on this one. UA doesn’t make this claim with regard to its shirt.

In this author’s opinion, based on the results of our field-expedient tests and the USMC’s extensive testing, the added benefits provided by Potomac’s shirt will serve our male and female Marines well both on and off the field of battle. Finally, consider your own personal needs when selecting what you put up against your skin, because some day it may save it! 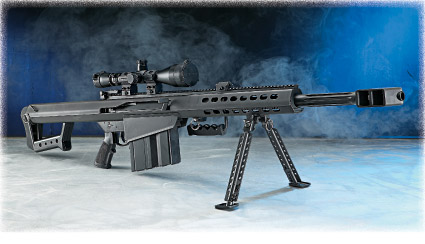