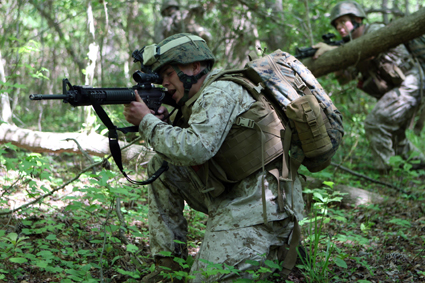 Marines and civilian contractors from Marine Corps Systems Command in Quantico, Va., put Marines through various daily exercises similar to what they may experience while deployed in a combat zone to receive feedback on the improved body armor.

“Marines are performing basic infantry tasks to compare the currently fielded scalable plate carriers with what we believe is an improved version of that plate carrier,” said Capt. Richard Cushing, the project officer for the armor and load bearing team, Systems Command.

The exercises consisted of a three-mile hike with 50 pounds of weight plus small arms protective inserts (SAPI), clearing operations in an urban environment, a patrol through a wooden trail and an endurance course.  The same four exercises were done over a five-day period but with four different variables: with cummerbund and side SAPIs, without cummerbund, without side SAPIs, and with only the cummerbund. After each exercise, Marines were asked to rate how the ISPC felt.

The battalion was one of the first units to use the currently fielded plate carrier, a lightweight body armor vest, while deployed. After using the plate carrier for a few months in Afghanistan, Marines gave feedback to Systems Command personnel, who then made adjustments to the plate carrier based off of the Marines’ responses.

Some major suggestions Marines made were to decrease the amount of rubbing and chaffing on the waist caused by the side SAPIs and to increase the level of comfort in the shoulder area.

“We wanted to test the new, improved plate carrier with the same battalion to see if we answered the mail,” Cushing said. “The Marines seem to like the adjustments we made, but the biggest positive is that it appears that the changes to the shoulder area may in fact provide better load and weight distribution and comfort.”

According to Lance Cpl. Jesse Flynn, a squad leader with the battalion, the ISPC is “the real deal.”

“It’s awesome,” he said. “It’s much better than the old (Modular Tactical Vest) we used for a while in Afghanistan. It covers all of the necessary essentials, but it’s a lot easier to move and shoot.”

Staff Sgt. Robert Dawson, a platoon sergeant with the battalion, said the ISPC will definitely help out the Marine Corps, especially those Marines on the front line.

“(The ISPC) definitely gets an A-plus from me because of its increased mobility, durability and it gives us room to breath,” Dawson said. “It’s light, comfortable and very flexible.”

Systems Command and the civilian contractors also made changes to the MTV, a heavier vest. Last week, they conducted a similar evaluation with Marines from Headquarters Company, 2nd Marine Regiment.

“We put them through the paces and asked them to give us honest feedback on whether or not the newly improved MTV (IMTV) is better over the currently fielded MTV.

“Our basic concerns were improving the range of motion and mobility in the shoulder area, donning and taking off the system, and enhanced integration with the cummerbund and side plates,” Cushing said.

Cushing added that the ISPC and IMTV will give Marines more mobility, while providing the same level of soft-armor protection.  Soft armor is made from many layers of woven or laminated fibers and protects wearers from certain projectile threats as well as shrapnel fragments.

The systems will also give battalion commanders more options as they will be able to choose between the two systems.

According to MARADMIN 0254/09, “operating force commanders at the lieutenant colonel level or higher are authorized to determine the level of personal protective equipment (PPE) for wear by assigned personnel. Determination will be made based on mission, unit type, threat, and environment factors.”

The plate carrier will not take the place of the MTV, but will serve as a complement to it.

The IMTV should be used in missions where fragmentation threats are high. The ISPC is better suited for missions where direct fire is the main threat, Cushing said.

“Battalion commanders in the infantry and combat vehicle crewmen communities will be given complementary systems and will be able to make decisions based off their assessment of their mission,” Cushing said. “It allows (the commanders) the flexibility to alter the system based on their mission and to provide the Marines the best level of protection for that day.” 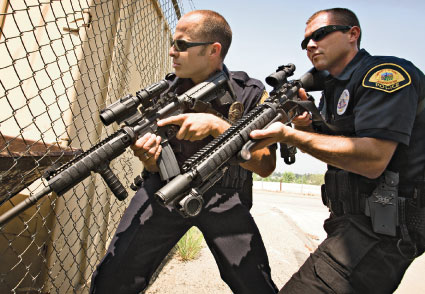