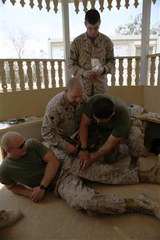 AL ASAD AIR BASE, Iraq  — During a fire fight, sometimes corpsmen are too far from the wounded, so it’s up to the nearby Marines to save a friend’s life.

To prepare for this eventuality, the Marine Corps wants its own Marines well-trained and ready to give instant medical assistance to any downed Marine on the battlefield. Several Marines with Regimental Combat Team 8 recently graduated from a Combat Lifesavers Course held at the regimental aid station aboard Camp Ripper, Iraq.

Piggybacking off of what Marines are already taught during recruit training, hospital corpsmen have added detailed information to the ABCs.

“The ABC’s are airway, breathing and circulation,” said Seaman Wilson Araujo, a hospital corpsman with RCT-8.

The Marines were instructed to check if the Marine was breathing, using a volunteer as an example.  There was notional blockage so the corpsmen instructed the Marines how to ensure the wounded is breathing by bypassing the mouth with a rubber tube.

To do so, the Marine would lubricate the tube using whatever was available: a tube of lubrication or the victim’s saliva or blood. Once inserted past the nasal cavity and into the throat, the victim should be able to breathe normally.

“If you have a guy drowning in his own blood, you’re going to have to put it in,” Araujo said. “You don’t want a guy dying because you don’t know how to handle a piece of rubber.”

If there was nothing blocking the volunteer’s airway and he was responding, his airway and breathing were good. But if there is an arterial wound or a missing limb, there is a definite circulation problem.

“We want you to know how to apply a tourniquet and a pressure dressing,” Araujo said.

The tourniquet is meant to stop blood flow. The Marine may lose a limb entirely but the life itself may be saved.

“You want to place it at least three inches above the wound,” Araujo said.

“A Marine can die within two minutes of arterial bleeding so you put on a tourniquet and then everything can wait,” Colonna said.

If a tourniquet is no longer needed after proper placement, the Marine and his limb can still be saved.

“It takes eight hours using the tourniquet before there’s total loss of the limb,” Araujo said.

In deeply wounded areas, other than limbs, each Marine is given a Quick-Clot packet to temporarily cauterize the open wound.

Because the mealy substance is activated by fluids, it should be opened with dry hands. The Marine would then pour the substance into the wound, shoving it deep enough to make sure the blood quickly clots. Once placed in surgical care, trained doctors will remove the clotting matter.

But if a casualty evacuation isn’t possible, Marines must know how to sustain the wounded Marine’s life using an intravenous saline drip.

“If you’re with the patient for more than 20 minutes, you’ll need to set up an IV or he’ll die,” Colonna said.

Decision making in combat can decide who lives and who dies. During combat, the least wounded get treated first to ensure the fight ensues.

“If you have two Marines with bullet wounds and one guy is missing limbs, you have to treat the bullet wounds first,” Colonna explained. “Those guys will cover you while you’re treating the guy with the missing hand or leg.”

This course, although rudimentary compared to what hospital corpsmen know, was taken seriously by the Marines because they know it’s importance.

“Now I know exactly how to perform these lifesaving procedures on my buddy in combat,” said Cpl. Philip Dorman, a fires watch clerk with RCT-8.

In today’s combat environment, all Marines need to know how to save lives. These basic lifesaving skills may help save a fellow Marine in combat, and the term “Marine up!” may have the same lifesaving potential as “Corpsman up!”.

AL ASAD AIR BASE, Iraq  — During a fire fight, sometimes corpsmen are too…