Ever since the .308 cartridge was developed in 1952 as a hunting round, and adopted by the US military in 7.62x51mm designation as our official service rifle caliber in 1954 (with rifles actually following in 1957), the caliber has been an extremely popular one even though it’s something like the venerable .357 Mag in being a jack of all trades and master of none. Very much like the .357 Mag, the .308 is a mid-bore in both bullet diameter and performance. The .357 Mag performs very well within its design capabilities, offers a useful jump in power and effectiveness over “lesser” rounds such as the 9mm and .38 Special with less utility in handling the larger game varieties that the .41 and .44 Mags do, while falling right square at the upper edge of what generations of handgun shooters have been willing to tolerate in terms of recoil and blast for hunting and self-defense uses. Likewise, the .308 performs very well within its design capabilities across a broad range of game and defensive applications, 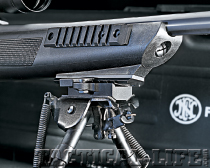 offers a step up from the .223 and .270 in mid to larger size game fields without quite the effectiveness of the heavier magnum rifles, and marks the upper levels of recoil and blast that many hunters and longer range shooters are willing to deal with. The .270 shoots flatter, the .30-06 can shoot heavier, and the various magnums can shoot farther.

There are worse choices than the .308, and there are better choices, depending on what you need a given rifle to do, but as a middle-of-the-road .30-caliber round, the old .308 covers a lot of territory. It has long been, and remains, a dependable crossover standby for hunters, military personnel, and law enforcement, and that’s because in the right platform and with the right projectile, this versatile caliber tends to handle business quite well.

Conventional wisdom used to be that you just didn’t get the same level of accuracy from a semi-auto rifle than from a bolt-gun. Yes, there were exceptions with hand-built and carefully tuned match rifles such as those that showed up at Camp Perry, but in general if you wanted to punch little holes in tiny groups at long distances, you bought a bolt-action gun. There was just too much going on, with looser tolerances and all those parts throwing themselves all over hell and back inside the gun. Today, that’s changed, and accurate semi-auto rifles are nowhere near the rarity they once were. Neither are semi-autos in .308. Remington and Browning have offered hunting semis in .308/7.62 for well over 30 years, but the majority of the newer ones we’re seeing are based on military designs, and while most are dependable, they’re not noted for being supremely accurate. FNH USA, in response to LE needs and other shooters who like the idea of a reliable .308-caliber semi-auto with a removable magazine that also happens to offer target-grade accuracy, has split the middle in creating a tactical package built around the successful Browning BAR hunting rifle.

Gun Details
The new FNAR bears no relationship whatever to an AR-15. It is a gas-operated rifle, but it’s a BAR at heart, and that’s not the Browning Automatic Rifle of enduring military fame. The Browning hunting BAR goes back to the 1960s, and it’s still in the Browning catalog in various forms. Since the parent FNH (Fabrique Nationale Herstal) company in Belgium owns Browning and the Winchester firearms licensing rights in the US, FNH has been adapting designs from both and offering them to the law enforcement market through their FNH USA subsidiary in this country. The FNAR is one of these, built at the plant in South Carolina. While it is based on a much older rifle, the FNAR is not your father’s elk gun.

The guts of the FNAR are an under-barrel piston with dual action bars operating a rotary-headed bolt that locks into the rear of the barrel. It’s a strong lockup that places relatively little stress on the receiver itself, allowing an alloy receiver to cut down on weight without reducing either strength or longevity. Most of the current BAR hunting rifles carried by Browning now use aluminum receivers, and in the case of the FNAR (not exactly a light rifle in any of its versions) that’s a good choice. With modifications over the years, this is a reliable and time-proven action.

Outside’s where the racing body bolts on the older chassis. There are four catalogued versions of the FNAR, two each in a Heavy Barrel and Light Barrel. Both feature 20-inch fluted barrels with black phosphate finish, chromed bores, and recessed target-style muzzle crowns. The primary differences between models are the barrel weights and magazine capacities. The sample sent was the heavy-barreled FNAR with one detachable 20-round box magazine, the other heavy barrel rifle comes with a 10-round box magazine.

The FNAR wears a two-piece black synthetic stock set, checkered on the fore-end, and pistol-gripped on the rear. Up front, the fore-end comes standard with three 4.25-inch MIL-STD-1913 rails mounted on both sides and the bottom. The bottom rail includes a sling swivel stud, and both identical side rails have the same threaded screw hole to allow moving a forward sling attachment to either side. At the rear, the stock’s sharply checkered hollow pistolgrip is slip-resistant and moderately comfortable with a finger groove, and there’s a rear sling swivel stud mounted. Partly explaining the price tag on the rifle, FNH includes enough stock accessories to fit the gun to a wide range of shooters’ builds with six stock spacer shims to adjust drop and cant, three different height soft rubber comb risers, and three different thickness rubber recoil pads. If you can’t tailor this gun to your own personal body, you may want to invest in a new body.

On top, a 9.63-inch MIL-STD-1913 rail provides plenty of leeway for setting up eye relief on most scopes, and you’ll need good glass to take advantage of the accuracy potential this rifle has (and, because it has no iron sights). On the right side the ejection port, the bolt handle, and the bolt release lever are all set up for right-handers. The cross-bolt safety behind the triggerguard can work with either hand, and the magazine release button’s fully ambidextrous.

Scope
For testing purposes and general use I saw no point in over-spending for a high-end military-style scope with cluttered reticles and other capabilities that really aren’t necessary with this rifle. A Weaver Grand Slam Model 800473 3-10X40mm in matte black to match the FNAR’s finish was mounted on the rail using a set of Warne extra high MAXIMA all-steel tactical rings designed for a MIL-STD-1913 rail. These are hard-use wide-body rings using 8 T-15 torx screws up top and half-inch hex nuts at the base capable of taking up to a mil-spec 65-inch/pounds of torque, and they stay put once they are set up.

The one-piece 11.9-inch scope adds 13 ounces to the rifle, uses quarter-inch click adjustments (one click equals a 1/4- inch change in point of aim at 100 yards), transmits up to 94% of available light, and gives a clear view with a standard Dual-X reticle.

Range Time
The FNAR was test-fired at a state-owned range in the middle of a three-week stretch of fog and dark skies on a cool day in January. I fired it as it came out of the box and made no effort to use any of the shims, risers or recoil pads to fit it to my build. The only concession to personal dimensions was positioning the Weaver scope’s 3.5-inch eye relief where it needed to be for bench shooting, and there was plenty of room on the rail to do that.

Although it really wasn’t necessary at 100 yards, cranking the knob up all the way to ten helped cut through the ground haze, and the clear glass was an added benefit in poor shooting conditions. For most uses inside 300 yards, a very basic and time-proven set of thin crosshairs that doesn’t obstruct the field of view is more than adequate, and much less distracting than many higher-priced and heavier tactical scopes.

Using six commercial loads running the gamut from Winchester generic white box FMJ to the more specialized Federal Tactical Rifle Urban hollow-points, accuracy varied from brand to brand, and I wasn’t quite able to meet FNH’s standard of 1-MOA with each three-shot group. But, I did manage to go either at or under an inch with four of the six, and three holes measured at 0.63 of an inch center to center with the Federal 165-grain TRU BTHP rounds goes a long way toward dispelling the old myth that a semi-auto rifle can’t shoot as well as a boltgun.

The FNAR can certainly put a bullet where you want it, if you can. Recoil was extremely light with the heavy barrel and the overall 11 pound weight (unloaded, with glass and magazine), the two-stage trigger had a slight creep on final let-off and was not as crisp as it could be at 4.75 pounds, but not a real handicap, there were no malfunctions in the cold and damp weather, and it was my shooting glasses that kept fogging up, not the scope. The rifle, scope and mounts all did everything I expected of them.

Final Notes
The FNAR is an accurate and reliable semi-automatic user-configurable rifle in a proven caliber that uses a 20-round detachable box magazine. This is enough in itself to understandably appeal to many, but as a mid-range perimeter gun the FNAR shines in LE applications. Hardly the best tool to haul out on every questionable traffic stop, the FNAR (particularly with a Harris bipod attached to the forward sling stud) easily offers very effective range out to 300 yards without the price tag of a more expensive dedicated sniper rifle, a faster rate of fire than a bolt-action rifle, a higher on-board magazine capacity, and the ability to quickly reload or switch ammunition types with removable 20-round boxes. Not as dynamic in deployment as a 7-pound .223 carbine, FNAR’s niche would be setting up in a fixed position on any of a number of stand-off situations including hostages and barricaded suspects.