Crosman’s Marine M4 lookalike ER02 has a removable carry handle and can fire in electric full-auto or spring-powered modes.

My first BB gun was a Crosman. No surprise, since the Rochester-based company has been making airguns since 1924. For most of that history, though, the BB- and pellet-firing airguns were seen as a child’s plaything. Not so any longer. With an explosion of advances in airgun and airsoft technology in the last few decades, Crosman now boasts a line of air-powered weapons suitable for the serious sportsman as well.

Pistol Caliber
At an industry trade show in Las Vegas earlier this year, I had a chance to fire Crosman’s massive Benjamin Rogue air rifle. The Rogue is definitely not a child’s toy! The 48-inch-long, nearly 10-pound rifle is a pre-charged pneumatic that fires a .357-caliber bullet down its rifled barrel at up to 800 FPS (feet per second). Many PCP rifles cannot be hand pumped—they must be charged from a scuba or HPA tank. The EPiC control panel on the side of the receiver shows the status of the charge and regulates the power to squeeze out the maximum number of shots. The bolt action feeds actual .357-caliber, non-lubricated lead bullets from a six-round clip. That’s right, this air rifle shoots actual .357 bullets.

Not a toy! The 10-pound Crosman/Benjamin Rogue rifle uses a pre-charged pneumatic system to fire real .357 bullets at up to 800 feet per second!

On the range, I had no trouble hitting silhouettes off-hand at 75 yards with this extremely quiet air rifle. The muzzle blast and recoil were equivalent to a .22 rimfire rifle, but firing a way more potent round. For $50 more, the Rogue “Porkchop package” comes with two boxes of Nosler 145-grain ballistic tip bullets. Coming out of the Rogue at over 900 FPS, the Nosler ammo should be able to take game from prairie dogs and coyotes up to hogs weighing in at 200 pounds. The Rogue Limited Edition package comes in a soft case and includes a Desert Tan pistol grip and buttstock, a lighted-reticle 3-12X CenterPoint 30mm tube tactical scope and folding bipod. Its MSRP is $1,500.

The Lothar Walther barrel on the MAR177 upper converts your centerfire AR rifle into a real match-quality air rifle. 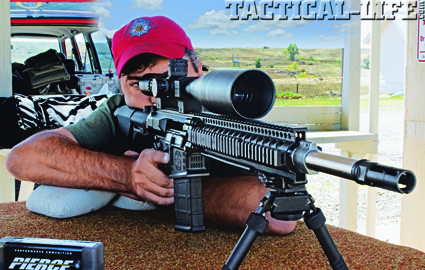