0
SHARES
621
VIEWS
Share on FacebookShare on Twitter
HK’s MR556A1, shown here with the SureFire M900A vertical foregrip weapon light and an Aimpoint PRO with a 3XMag optic, features the same ultra-reliable gas piston system used by US Special Forces in the HK416, delivering premium performance in a patrol rifle.

Let’s face it, U.S. Special Operations units don’t scrimp on their equipment—nor do they stick with something if it doesn’t produce results. Given their use of and trust for Heckler & Koch (HK) firearms, it is not surprising that these units worked with that company in 2004 to develop the piston-driven AR carbine-style rifle that is known as the HK416. 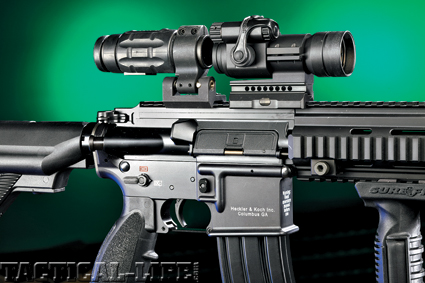 The polymer dust cover on the MR556 is both quieter and impervious to corrosion while the captive takedown screw at the rear of the handguard makes its removal extremely easy.

The reputation this gun has earned among these elite warriors is due to its success in combat under the harshest conditions and its proven record of reliability, durability and accuracy. This, of course, almost immediately translated into a growing demand for a civilian version. Now, after many years of waiting, HK has introduced their MR556A1 rifle, which in many ways is an improvement over the military version.
I spoke with Wayne Weber, President of Heckler & Koch U.S.A. about the new rifle and he explained the difficulties that had to be overcome to offer a civilian version. This included dealing with subtle variations and improvements, to naming the new gun to the intricacies of US firearms import laws. Eventually all of these were resolved and the MR556A1 is now one of three HK firearms manufactured in the United States. 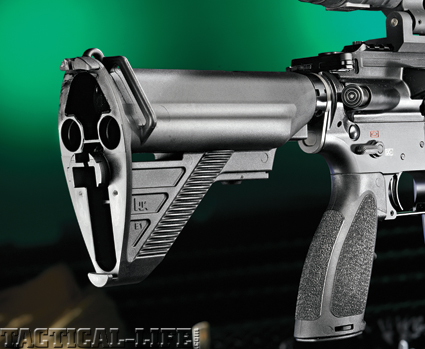 The rubber butt pad on the MR556 stock twists off to reveal an internal storage area for batteries and other equipment. This area also secures the disassembly tool.

Based on the standard M4-style rifle, and still chambered in 5.56x45mm, the new MR556 dispenses with the old gas impingement system of operation for a new, proprietary short-stroke gas piston system. Anyone familiar with the standard AR gas system knows that all the gasses, fouling and carbon from firing a round are directed back through the gas tube into the bolt and receiver to operate the rifle.

lent accuracy, but only so long as the gun is kept clean and well lubricated—and therein lies the rub. With gasses going back into the bolt and receiver, it not only heats up quickly, especially in full-auto, but also makes the most important moving parts very dirty. Indeed, cleaning an AR rifle is a chore that no one craves. 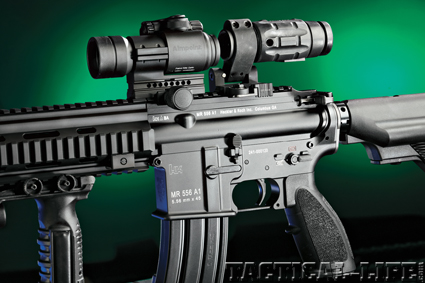 HK retained all of the familiar fire control systems but added an extended latch ambidextrous tactical charging handle. Note the spring-loaded takedown pins, which require the use of a special tool to disassemble the rifle.

HK’s piston system resolves this issue by keeping the gasses at the front of the gun and out of the bolt and receiver. Expanding gasses are directed upwards though a port in the barrel and back against a piston that moves back only about 0.25 of an inch to strike a rod which pushes back the bolt, cycling the action. This requires the use of a different bolt with a solid carrier key, which is actually machined as part of the bolt itself in one solid piece to withstand the force. Excess gasses are vented out of
the front of the rifle just below the front sight.

The MR556 bolt carrier group also features a few changes over a standard AR bolt, including a spring-loaded firing pin with a firing pin safety. A lever on top of the bolt above the back of the firing pin must be raised, to properly install the firing pin it its full forward position. When firing, the hammer pushes this safety lever up in order to properly engage the firing pin. This safety prevents unintentional discharges as a result of inertia. The firing pin retaining pin is also captive, which is a nice feature for anyone who has ever dropped one of these tiny pins and had to find it.

According to HK, the piston system vastly improves the reliability of the weapon and virtually eliminates the usual fouling found on most AR rifles. With less fouling, less lubrication is needed. Improvements over the M4 certainly don’t stop at the gas system however. In fact, the MR stands for Match Rifle and the gun is built for accuracy more so than its progenitor although it uses many of the same parts including the gas block, which still features the grenade launcher attachment point.

This rifle has a 16.5-inch cold hammer forged, heavy barrel with 1-in-7-inch right-hand twist rate with six lands and grooves and topped off with an A1-style flash hider/compensator. The MR556 dispenses with a chrome-lined barrel since HK engineers determined that an unlined bore delivers better accuracy. Chrome-lining barrels can help extend the life of the barrel but inconsistencies in the chrome thickness can work against maximum accuracy.

To further enhance accuracy, the barrel of the M556 is slightly “swagged”, which means that it narrows in its internal diameter as it nears the muzzle end, improving both accuracy and bullet velocity. The end result is an outstandingly accurate barrel with a life expectancy without degradation in excess of 20,000 rounds.

Further contributing to the rifle’s accuracy are the uniquely tight tolerances between the upper and lower receiver, which results in absolutely no play or flex between the two parts. This was achieved through a rather ingenious method in which the standard AR front and rear takedown pins each have a spring loaded ball bearing at the front. These ball bearings press against the upper receiver to the point that they cannot be removed to disassemble the rifle without a special tool, which is conveniently stored inside the six-position telescoping stock. The tool is also needed to push the takedown pins back in to reassemble the rifle. 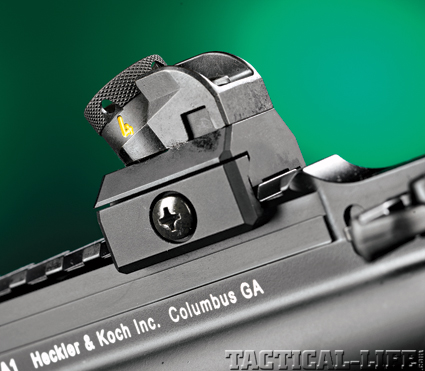 In a nod to tradition the MR556 includes HK’s signature diopter sights, which are easily removed for mounting optics.

The MR556’s one-piece free-floated MIL-STD-1913 quad-rail handguard can be easily removed with an Allen wrench and this provides the user access to disassemble and clean the piston gas system. The rails along the top of the handguard match up with the flat-top receiver rails to offer an almost uninterrupted length of rail for mounting optics, night vision, holographic sights, magnifiers and lasers. HK also developed a fully reversible charging handle for left- or right-handed use.

In a nod to tradition, HK ships the rifle with its signature diopter rear and open top circle front sights. These are easily removable should the user prefer aftermarket folding back up iron sights or none at all. An HK folding front sight like the one found on the HK416 can also be installed atop the gas block forward of the handguard. Not traditional at all however is the polymer dustcover, which is in many ways an improvement over traditional stamped-steel dustcovers since it is both quieter and won’t rust.
The MR556 lower receiver dispenses with a lot of bells and whistles and sticks with the basic functional profile that is familiar to all AR users. The only difference is that a fully ambidextrous safety selector is included, which doesn’t require the hammer to be cocked to “safe” it.

HK’s 6-position telescoping stock features a rotating removable shoulder pad with a rubber base plate, which provides access to an internal storage compartment.

HK’s corrosion-resistant steel 30-round magazine is included, as is a proprietary buffer. The magazine
well is flared to

ease rapid magazine changes and the entire rifle features a very smooth hard anodized black finish.
The MR556 also offers full compatibility between the upper and lower receivers for other AR-type rifles, which allows the use of the HK piston upper on almost any AR lower receiver. HK does in fact offer a complete upper receiver kit to upgrade existing lowers. 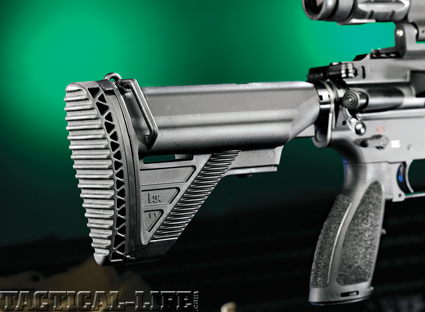 The MR556 has an extremely sturdy 6-position stock on a Mil-Spec buffer tube, which can be lock in place, taking out all movement/play in the stock.

For range testing a Designated Marksman Scope from Millet with a one MOA dot and 18 MOA donut illuminated reticle and 1-4x24mm was used. This fog proof and fully coated scope offers crystal clear optics with the versatility to engage close and medium range targets and performed extremely well at 100 yards.

The MR556 trigger is a precise two-stage design with a 7.64-pound pull weight according to HK, however on the sample I received the trigger pull was closer to 6 pounds. The rifle’s heavy barrel places most of the weight toward the front making it seem heavier than it is especially when firing offhand or in routine handling. The HK steel magazine is also more than twice as heavy as an aluminum magazine.

The rifle was extremely comfortable to shoot and there were no malfunctions of any sort. After a fair amount of benchrest and offhand shooting, I immediately removed the bolt and I was truly surprised to see that it felt actually cool to the touch and had virtually no carbon fouling at all. It became immediately apparent why special operations forces far prefer this piston-operated system over traditional gas impingement M4s.

I used a variety of ammunition for range testing both offhand at 50 yards and from a bench rest at 100 yards. CorBon ammunition produced my best group of the day at right about 1 inch at 100 yards. Sample targets from HK had sub-MOA groups at that distance.

The MR556A1 exhibits outstanding fit and finish and HK has truly focused on the fine details of producing a match rifle. This level of performance does not come cheap however, and its front-heavy handling characteristics require some getting used to. This rifle will most appeal to those seeking superior reliability under any conditions, especially where normal rifle maintenance may not be practical. HK’s gas piston system will clearly deliver shot after shot performance.