Heckler & Koch firearms seem to dwell in a realm of their own, a higher plane of existence to which other guns can only aspire. It is a place that has been well earned through sheer strength of German-bred skill, precision, and ingenuity. The HK MR762A1 is certainly no exception, delivering performance equal to its reputation and offering law enforcement officers an outstanding AR-based rifle in the powerful 7.62mm NATO chambering.

The MR762A1’s story goes back to the development of the HK416 in 2004, a piston-powered 5.56mm AR carbine-based design created by HK specifically to meet the demands of U.S. special operations units. This rifle achieved success in combat under the harshest conditions, delivering a proven record of reliability, durability, and accuracy. As a result, the U.S. Marine Corps has begun the process of adopting the HK416 as their designated squad automatic rifle, replacing the M249 SAW.

HK followed this success with the HK417, a beefed-up 7.62mm NATO version intended more for the designated marksman role, where greater precision and higher power are needed. Naturally, as with any new weapon system or piece of equipment deemed good enough for America’s elite combat units, there was an immediate demand for a civilian version. It has taken many years, but the MR762A1 is now available as the civilianized version of the HK417, adding key improvements designed to appeal to civilian and law enforcement users while maintaining all of its military pedigree.

Manufactured in the U.S. and looking like a souped-up AR carbine, this rifle is chambered for the 7.62mm NATO round but handles equally well with .308 Winchester ammo. It dispenses with the AR’s old gas impingement system of operation for a new, proprietary short-stroke gas piston system. 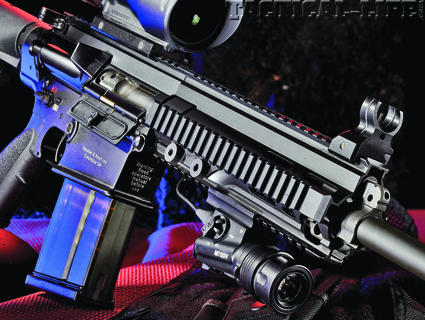 HK’s reliable gas piston system keeps carbon fouling and heat at the front of the gun and away from the bolt and receiver.

Anyone familiar with the standard AR gas system knows that all the gases, fouling and carbon from firing a round are directed back through the gas tube into the bolt and receiver to operate the rifle. This system is reliable and produces excellent accuracy, but only so long as the gun is kept clean and well lubricated, and therein lies the rub. With gases going back into the bolt and receiver, the rifle not only heats up quickly—especially in full-auto—but the most important moving parts get very dirty.

HK’s piston system resolves this issue by keeping the gases at the front of the gun and out of the bolt and receiver. Expanding gases are directed upwards through a port in the barrel and back against a piston, which moves back only about 0.25 inches to strike a rod. The rod then pushes back the bolt, cycling the action. This requires the use of a different bolt with a solid carrier key that is actually machined as part of the bolt itself, forming one solid piece to withstand the force. Excess gases are vented out the front of the rifle, just below the front sight. 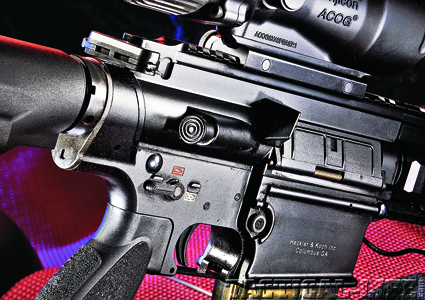 The tight fit between upper and lower receivers is caused by a spring-loaded ball bearing inside the front and rear takedown pins.

The MR762A1 bolt carrier group also features a few changes over a standard AR bolt, including a spring-loaded firing pin with a firing pin safety. A lever on top of the bolt (above the back of the firing pin) must be raised to properly install the firing pin in its full-forward position. When firing, the hammer pushes this safety lever up in order to properly engage the firing pin. This safety prevents unintentional discharges as a result of inertia. The firing pin retaining pin is also captive, which is a nice feature for anyone who has ever dropped one of these tiny pins and then had to search for it.

According to HK, this system vastly improves the reliability of the weapon and virtually eliminates the usual fouling found on most AR rifles. With less fouling, less lubrication is needed. Improvements don’t stop there, however. The MR stands for “Match Rifle,” and the gun is built for accuracy—more so than its progenitor, despite using many of the same parts, including the gas block, which still features the grenade launcher attachment point.

This rifle has a heavy, 16.5-inch, cold-hammer-forged, free-floating barrel with a 1-in-11-inch right-hand twist rate with four lands and grooves. The barrel is topped off with an HK-style flash suppressor/compensator. The MR762A1 dispenses with a chrome-lined barrel, as HK engineers determined that an unlined bore delivers better accuracy. Chrome-lining barrels can help extend the life of the barrel, but inconsistencies in the chrome thickness can work against maximum accuracy. The German-made barrel is also slightly “swaged,” meaning that its internal diameter narrows near the muzzle end, improving accuracy and bullet velocity. The end result is an outstandingly accurate barrel with a greater life expectancy. 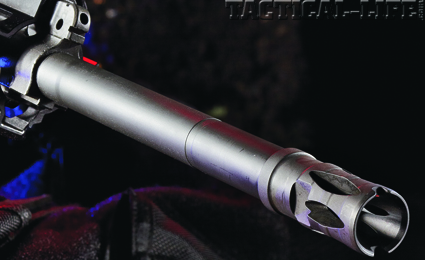 The heavy 16.5-inch, cold-hammer-forged, free-floating barrel is not chrome lined, which contributes to its accuracy.

Further contributing to the rifle’s accuracy are the uniquely tight tolerances between the upper and lower receiver—there is absolutely no play or flex between the two parts. This is achieved through a rather ingenious method in which the standard AR front and rear takedown pins each have a spring-loaded ball bearing at the front that press against the upper receiver to the point where they cannot be removed for disassembly without a special tool. Thankfully, that tool is conveniently stored inside the six-position telescoping stock. For reassembly, you’ll need the tool to push the takedown pins back in.

The MR762A1’s one-piece, free-floated Picatinny quad-rail handguard can be easily removed with an Allen wrench, providing access to the piston system. The rails along the top of the handguard match up with the flattop receiver rail to offer an almost uninterrupted length of rail for mounting optics, night vision, holographic sights, magnifiers and lasers. HK uses its own diopter iron sights, but HK fans who prefer to dress their rifle to look like the military-issue version will have access to an optional folding front sight that attaches to the gas block, ahead of the handguard.

An extended and fully reversible charging handle for left- or right-handed users features a very sturdy latch that secures into the standard slot cut into the upper receiver on the left side, but HK also cut a slot on the right side of the receiver for reversing the latch. The extended latch also makes it easier to operate with low-mounted optics, which is mainly what this rifle was intended for.

The MR762A1 has all the familiar controls of a standard AR, including a right-side-mounted magazine release and left-side bolt release. It also has a fully ambidextrous safety selector with very clearly marked pictographic markings on both sides.

HK’s five-position telescoping stock features a rotating removable shoulder pad with a rubber baseplate, which provides access to an internal storage compartment. The upper and lower receiver disassembly tool and Allen wrench are securely stored in this area. The stock also has top, left- and right-side sling attachment points. Many collapsible stocks also suffer from excessive amounts of play or flex, which can adversely affect precision shooting. HK addresses this issue by including a setscrew underneath the stock. Once the stock is set to the desired length of pull, the included disassembly tool can be used to tighten the setscrew and secure the stock in that fixed position.

The ergonomic pistol grip features a storage compartment and finger grooves, and its width helps fill the palm for a firm hold. The MR762A1 also uses the same translucent polymer magazines that are standard on the military HK417, which do an excellent job of helping keep track of remaining ammunition. The rifle comes with both 10- and 20-round magazines.

On the range, I first ran the MR762A1 through its paces against multiple targets at 50 yards while standing and using a Designated Marksman Scope from Millet, which features an illuminated 1-MOA dot inside an 18-MOA donut and 1-4X magnification. It proved ideal for close and intermediate range work out past 100 yards and the pairing would do well as a designated marksman rifle in an LE patrol capacity. As expected, there were no malfunctions encountered during two days of range firing with no maintenance.

For real precision work from a solid bench rest, I used the new Konus 550 Ballistic Reticle 3-9×40 scope. Konus offers high-quality, inexpensive scopes with fully coated optics that are built tough and are fog-, water- and shockproof. The second focal plane ballistic reticle in the 550 features vertical aiming points to compensate for bullet drop out to 550 yards as well as lateral hash marks for windage estimation. 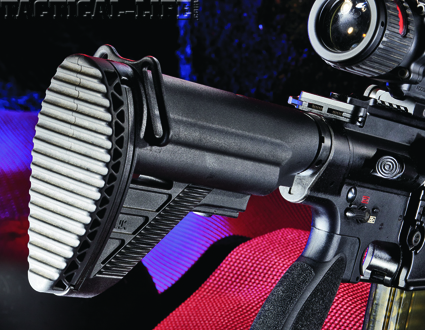 The five-position collapsible stock has a rotating removable shoulder pad with an internal storage compartment.

The accuracy results were the best I have yet seen from any semi-auto 7.62mm rifle. This is clearly a sub-MOA gun. The two-stage match trigger is specifically designed by HK for precision shooting and measured 4.5 pounds. While the first stage was light, the second stage had a fair amount of creep, more than expected for a precision rifle. Regardless, it’s an outstanding gun.

The MR762A1 will undoubtedly find a place in LE special teams and designated patrol cars for those instances requiring the utmost precision. With a high level of piston-driven reliability and 7.62mm punch, it can go the distance and defeat barriers. Its magazine capacity also offers police officers the firepower needed for the most extreme situations.