During the summer of 1961, America had left the idyllic 1950s behind. The country was in an era of change, and we were being forced to look at problems looming around the globe. The Cold War was heating up to the point where President Kennedy was advocating that we build fallout shelters in our backyards. To make matters even worst, the U.S. military had just started direct involvement in Vietnam. There was little joy in the country, but in troubled times, Americans turned their attention to the one bright spot of the year: baseball, our national pastime. For over 100 years, baseball had been the all-American sport.

Black Walnut, nickel-plated receiver, and laser etchings more than assure these rifles will never see the firing range. That alone should be a good excuse to pick up one of the standard Golden Boys.

In 1961, two young men were in a heated battle to see if they could break the single-season homerun record set by the great Babe Ruth. Not a day went by that I didn’t follow the exploits of Mickey Mantle and Roger Maris on the latest, greatest invention—the transistor radio. Toward the end of the summer, Mickey fell behind with injuries, but on October 1, 1961, Roger Maris forever inscribed his name in baseball history. In the last game of the season, Roger sent a long blast over the fence for his 61st homerun of the year. That was more than 50 years ago, and to commemorate the event, another American icon, Henry Repeating Arms, is producing a limited edition of their Golden Boy lever-action rifle. 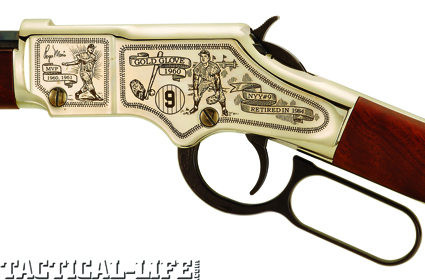 The left side of the receiver honors the two years that Roger Maris was voted the MVP, his 1960 Gold Glove award, and the retirement of his uniform number.

The modern day Henry Repeating Arms, noted for their commemorative rifles, chose the Golden Boy lever-action .22 LR for the Roger Maris tribute. Fifty rifles were engraved for the 50th anniversary of Roger Maris’ 61 in ’61 record-breaking season. The rifles have their nickel-plated receivers laser-etched with Maris-themed baseball scenes. The right side of the receiver has a portrait of Roger engraved in front of the Yankee Stadium banners, and a smaller engraving showing his 61 in ’61 homerun swing. The left side of the receiver is engraved with Roger in a fielding position and honors his back-to-back MVP awards. Also on the left, honor is given to the retirement of the number “9” by the New York Yankees. On the right side of the walnut buttstock, a baseball card-style engraving again shows Roger with his 61 in ’61 swing. This limited edition will be auctioned and proceeds will benefit the Roger Maris Cancer Center/Sanford Hospital in Fargo, North Dakota. 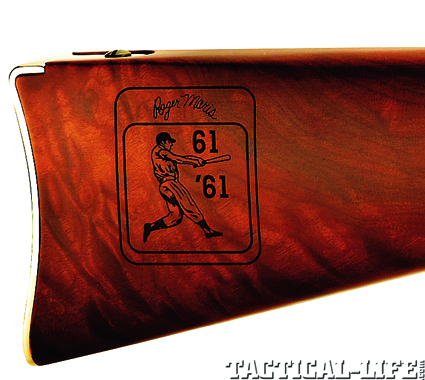 There are only 50 Roger Maris Commemoratives, and the thought of taking one of those to the range is baseball sacrilege. However, standard Golden Boys are available and make the perfect plinker for the American shooter. In fact, look on the box and it will clearly state, “Made in America or not made at all.”

My appreciation for quality work was overpowered by the urge to shoot, and the Golden Boy was tried with several .22 LR brands. All shot well, but CCI standard-velocity rounds had a slight edge in accuracy. At 50 yards, even someone old enough to remember Roger Maris’ 61st dinger was able to keep the rounds within a couple of inches. By now, the Roger Maris rifles are sold and sitting in collections around the country. Hopefully, all have found homes with lovers of baseball. For the rest of us, Henry is still busy turning out quality centerfire and rimfire rifles. (henryrepeating.com; 201-858-4400) 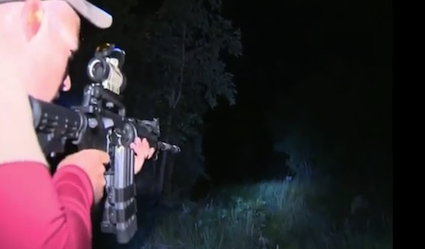 Tactical Weapons magazine is proud to announce one of its contributors to lend support for troops suffering from PTSD.

During the summer of 1961, America had left the idyllic 1950s behind. The country…