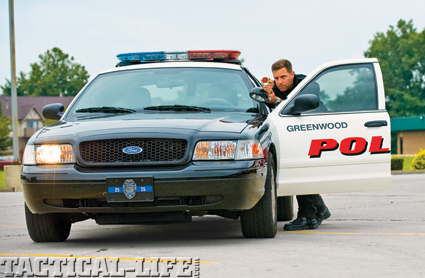 Safety should be a non-negotiable imperative in all situations—even getting to and from training can be hazardous. Sean Utley photo

According to a report by the prestigious National Tactical Officers Association (NTOA), “In 2010, 11 officers did not return home after training exercises—five more than the previous year. One officer died from a gunshot wound, two in transportation-related incidents, two officers drowned, and six suffered medical-related conditions including heart attacks, heat stroke, dehydration and head trauma.”

Our training is designed to keep our people alive. When it kills our people, we need to learn the lessons and fix what’s wrong. Let’s consider 12 cases that may help us better prepare and keep our own alive.

Physical Exertion
The NTOA reported the death of Homeland Security Officer John Zykas, 62, on September 8, 2010. Eight days before, he collapsed during a baton training exercise, suffering a heart attack. Major surgery failed to save him. Consider this Case One, and be aware of physical exertion and older officers.

In Case Two, Randy Atchison, a 24-year-old cadet in his first week at the California Highway Patrol Academy “collapsed during a fitness session.” NTOA reports, “The session included a half-hour of floor exercises, 20 minutes of dynamic stretching with a short break before the final segment, a 1.8-mile run. Cadet Atchison completed the entire session but felt unwell enough to be transported to the hospital. Initially, the cadet’s condition did not appear overly serious and he was even out of bed for a while before his condition deteriorated rapidly. He was transferred to another hospital the following day. However, on November 3, Cadet Atchison died. He had been diagnosed with rhabdomyolysis and severe dehydration.”
Rhabdomyolysis is a breakdown of muscle tissue, releasing dangerous substances into the bloodstream, associated with excessive physical activity, often in combination with dehydration. This case illustrates the danger of physical exertion facing all officers. 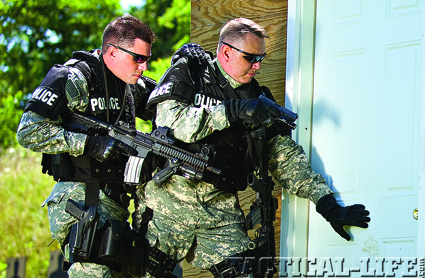 Breaching operations are dangerous. SWAT teams have to cover all the angles accordingly. Photo by Sean Utley.

It’s important to stress that danger is danger whether in training or on the street. In Case Three, Cedar Park, TX
Police Officer Leonard Reed, 41, was killed in a crash during a motorcycle patrol training ride in 2010.

In September of that same year, Greenfield (IN) Police Patrolman William Phillips was doing bicycle patrol training off-duty with two other officers when he was struck and killed by a hit-and-run driver. The incident, Case Four, occurred shortly after midnight, and Officer Phillips was wearing a helmet and reflective gear, and had the bike lights on. Critics alleged that the officers were riding three abreast on a public road at the time of the tragic death.

In October 2010, firehouse.com reported Case Five, where Baltimore Police Officer James Fowler was killed in a single-car crash while driving to a law enforcement training session. He was 61 years old, and had served Baltimore PD for 33 years. But as Case Six shows, even trainers abroad must remain vigilant. In July of 2011, retired Connecticut State Trooper Paul Protozenko was in Afghanistan training indigenous police and military. A convoy in which he was riding came under fire from terrorist forces. The retired trooper was killed by this enemy fire.

In July of 2011, Sanford (NC) Patrol Officer Eli Colonroche, 55, was practicing for a demonstration by rappelling off a four-story tower. In Case Seven—what was described as “a freak accident”—he was swung against the tower hard enough to sustain internal injuries. He died from internal bleeding. Just a month earlier, Case Eight occurred. South Pasadena Police Officer Kevin Sandoval collapsed, striking his head as he fell. Sadly, he did not survive, and was only 23 years old.

When training injuries do occur, it’s important to monitor them carefully, as Case Nine illustrates. In December of 2010, NTOA reported, “Norfolk Police Academy Recruit John Kohn, age 40, suffered multiple head traumas during training exercises between December 7 and 9. During that time, Recruit Kohn was participating in the weeklong defensive training portion of the academy program. The first injury occurred during blocking drills when an instructor delivered a blow to the face, causing the recruit to reel backwards. Although he claimed to feel okay when instructors asked, he later mentioned having a headache to other recruits.

“Later that day during knee-strike practice with another recruit, he was hit in the face with a pad he had been holding in front of him. This aggravated the headache and he felt nauseous. At one point, he did express concern about these symptoms to other recruits. Despite his discomfort, Recruit Kohn did not want to risk failure and so continued in the training. On December 9, he collided in a doorway with another recruit. The force was great enough that the other recruit needed to sit out for some time to recover. Eleven minutes later during a ground-fighting drill, Recruit Kohn was rendered temporarily unconscious after the instructor delivered four blows to the recruit’s head.

“Upon regaining partial consciousness, Recruit Kohn was clearly disoriented and his breathing became extremely labored. Medics were then summoned and upon their arrival, he was rushed to the hospital. Police Recruit Kohn died on December 18 after being in a coma for nine days.”

Defective equipment can kill cops in training. In Case Ten, Chesapeake (VA) Police Officer Timothy Schock was killed during police diver training. He experienced difficulty breathing, and when retrieved from the water could not be revived. Some insisted that a defective oxygen tank was the cause of this tragic death.

Officers must never confuse training tools with real tools, as in Case Eleven. In September of 2010, St. Joseph (MO) Police Officer Dan De Kraai was attending reality-based training in firearms and tactics. Returning from meal break, he and another officer engaged in an impromptu “training moment.” Unfortunately, outside the sterile training environment, the other officer had a real gun with real bullets. Officer De Kraai died at age 35 from a gunshot wound. 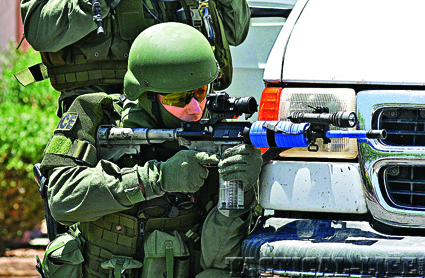 Finally, Case Twelve proves that we must use tools the ways in which they were intended. In July 2008, according to the British Daily Mail, police constables assigned to an armed unit in Manchester, Engand, acted out a role-playing scenario in which one constable was armed with a functional Remington 870 shotgun. It was loaded, according to the Daily Mail, (Please turn to page) with “specialist ammunition called Round Irritant Personnel (RIP). The ammunition is designed to burst tires and break windows and is deadly at close range.” At a distance of about a foot, this round was discharged into the chest of PC Ian Terry, age 32, killing him instantly.

Training for dangerous jobs is, by definition, dangerous. It’s something that must be borne in mind by the trainee and the trainer alike. Guys in their 60s have to remember they aren’t 30 anymore and pace themselves accordingly. Yet we see cases of officers in their 20s keeling over and not getting back up. There are medical conditions that can fly under the radar of the most extensive and professional medical prescreening. I recall the super-physically-fit, prime-of-life state trooper in the Midwest who dropped dead during a treadmill test. I recall the very-fit, early-30s airline pilot who collapsed and died of coronary thrombosis the night before he was to begin a combat shooting course with Ray Chapman and I at Chapman Academy South.

If you are involved in force-on-force firearms training, with the excellent Simunitions or anything remotely similar, read Training at the Speed of Life by Ken Murray. Col. David Grossman called it the bible of reality-based training, and I’ll second that. None of us are so “tacti-cool” that we can shortcut safety protocols.

In my many years as an international instructor with the PR-24 baton, I learned that we were more likely to get an injury from someone stepping on a carelessly dropped baton than from performing the rigorous techniques themselves. Over four decades now as a police firearms instructor, I’ll never forget the department trainer who spent weeks on a poorly ventilated indoor range teaching an autopistol transition with lead-bullet ammo who later died in his sleep from what the medical examiner diagnosed as “acute lead gas toxicity” before the transition program was done. He was in his 30s.

When I was a young instructor in the early 1970s, one of my mentors, FBI Instructor Charlie Smith, the founder of the Smith & Wesson Academy, reminded us that we were “the teachers of staying alive.” It’s as true today as when Charlie said it all those years ago—and it’s as true in the training environment as it is on the streets we train our officers to patrol. 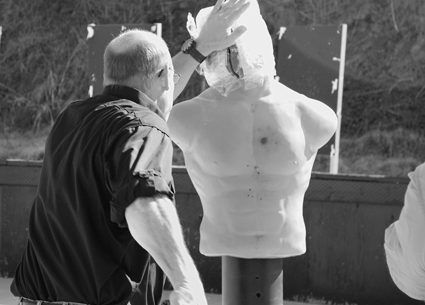