MK18 and MK12 uppers, and complete MK13 rifles. But a team that makes them to absolute Mil-Spec, based off their experience doing the same for our troops at the sharp tip of the spear, is worth a story.

Kevin O’Neill, one of the owners of High Caliber Sales, gave TW full access to their goodies and outlined their phil‑ osophies and goals. Their products are solid, to Mil-Spec, and impressively built. Many troops return home and ask HCS to build them the very weapons that they trusted in combat.

HCS products are top drawer because they have an inside advantage: A.J. Brown, the other partner in HCS, recently retired after 22 years at Crane, and was part of the original design team for the weapons that HCS now makes. Brown first helped develop MK262 match ammunition before beginning development of the MK18, MK12 and MK13 rifles. The knowledge and experience he brings to HCS is not a skill set that can be learned as you go. 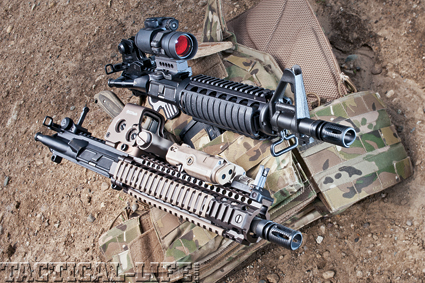 HCS uppers are built tough and to spec. They also make quality accessories. You can have your upper the way you want it—straight from them.

MOD Specs
I arranged with Kevin O’Neill to test one of their products, and as a fan of SBRs, chose the MK18. HCS loaned me a MOD0 and a MOD1, differing only in rail systems—the MOD0 has the Knight’s Armament (KAC) M4 RIS rail, the MOD1 has the Daniel Defense rail system. Both come with 10.3-inch chrome-lined 1-in-7-inch-twist barrels in standard flattop receivers. They include full-auto BCGs, MPI-inspected bolts and PRI charging handles. Both uppers had KAC QD flash hiders for KAC suppressors. The MOD0 came with a fixed front sight and a Lewis Machine & Tool tactical adjustable rear sight. The MOD1 had a KAC flip-up front sight and 300-meter flip-up rear sight. A buyer can select options, such as a standard birdcage flash hider or even a Gemtech bi-lock style adapter, or have HCS add an Aimpoint T-1 and Larue tall mount, or KAC suppressor.