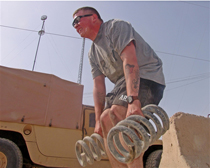 The 20-minute, high-intensity workout is called the Tabata, a variation of the fitness training the platoon performs three days a week.

The workout, established in 1996, is named for its creator, Dr. Izumi Tabata of Tokyo. It incorporates timed, maximum-intensity exercise in short bursts, followed by a resting period.

“This is good combat training,” Army Sgt. Gavin Hutchins, a 2nd Platoon squad leader, said. “We are building up our bodies to carry ammunition cans and heavy supplies when we go out on missions.”

The regimen not only prepares troops for the rigors of combat, as it mimics the movements of knocking down doors and removing debris during a mission, but also is helping one soldier become healthier.

“I came into this unit with high blood pressure,” Army Spc. Ronald Gardner, an infantry driver, said. “It was 154, [and] now it’s 115 over 70, so this workout is saving my life.” Gardner has lost 40 pounds using this workout.

The rotation exercises include carrying the springs, lifting and holding the larger springs, hitting a Humvee tire with a sledgehammer, pulling the tire with straps and variations of push-ups.

The soldiers said the Humvee shock springs range from 30 to 45 pounds, and the tires weigh about 300 pounds each. “The tires were given to us by the supply sergeant, and the rest of the stuff we got from the dump,” Hutchins said.

While the soldiers were in Kuwait before moving into Iraq, they began cross-fitness training. A certified instructor there told them about the Tabata program and trained them to push it to the limit.

“If you got anything left after this workout, you are wrong,” Army Spc. Daniel Beck, the platoon sergeant’s radio operator, said.

The soldiers exercise on the basketball court at 3 p.m. The temperature is more than 100 degrees, with no covering or shade to help block the sun. A hint of a breeze blows, but not enough to dry the sweat that drenches all of them. The dirt from the springs migrates to the soldiers’ hands, arms, and clothing. Yet, they keep holding on.

Hutchins said the platoon has lost 100 pounds as a group since the soldiers began working out in Kuwait about a month ago. “These guys are going to be strong in a short period of time,” he added.

Then, as the sweat pours down his face, he shouts, “Cross-fit or die!”