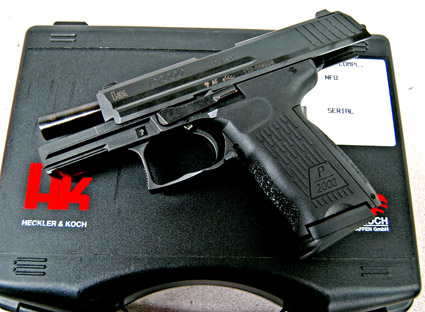 The Customs Border Protection section of the Department of Homeland Security (DHS) has brought together numerous agencies that before 9-11 had little to do with each other. Just like with step-families that have to learn to live with each other, the agents who used to be Customs, Immigration, Agriculture, and Border Patrol were suddenly thrust together. All had their own policies and practices as well as equipment. This included firearms.

These agencies then realized a huge undertaking was needed to choose their duty side arms. So, for three months in 2004 agents from the DHS set out to do just that. Bids were sent out for a new pistol to carry as a duty pistol, and manufacturers came from all over. Sigarms, Glock, Heckler & Koch, and others came to try out for this honor, and the lucrative contracts that would surely follow if they were selected. 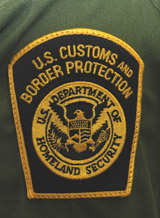 Picking a new Weapon
The contracts were later awarded to Sigarms and HK for the various agencies in DHS. For the Customs and Border Protection, Border Patrol (BP), the HK P-2000 was chosen to replace its battle-weary Beretta 96 .40 S&W. The Berettas had served well, but were overall at the end of their service life after their years in the field. For undercover, backup, and desk duty, the HK P-2000 SK version was selected.

The HK wasn’t too much of a stretch for the Border Patrol since it had allowed agents to buy the USP Compact in .40 S&W years before as a duty weapon. It was durable, accurate and high quality for BP agents in the field.

After-Action Report Card
The P-2000’s lines show it’s heritage from HK’s USP. When I first saw the pistol, I just thought it was a slightly different USP Compact. I was almost right. As one agent I spoke to put it, the P-2000 is a debugged USP.

Well, now that it’s been out for over a year’s time, what’s the word from the guys actually carrying it? I spent some time with officers of the Border Patrol recently, and took the time to go over their impressions of the new gun.

First off, I haven’t found a single person who didn’t like the new gun. Sure, there were those who felt a fond remembrance for their old Beretta’s, but no one ever felt they were worse off with the new HK’s. 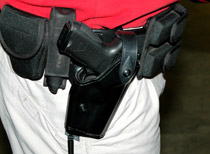 Comfortable Carry
Some people told me how much more comfortable they were with the new gun, with a weight that was significantly lighter than the Beretta. I held the Beretta 96 in one hand, and the P-2000 in the other, and I could tell the weight difference was significant. The size and shape of the P-2000 also make for an easier gun to carry and conceal in my opinion.

The polymer makes for a lighter, and some might argue, more durable gun. In fact, while other polymer weapons rely on metal rails that are small pieces of steel inserted into portions of the frame, HK’s P-2000 has a more robust metal framework that is integral to the frame.

If you sit at a desk, you can appreciate a lighter gun; if you conceal it, even more so. The P-2000 is easily at home on a desk holster, and its compact size and lightweight make for a weapon that doesn’t weigh down your duty belt. If you carry it concealed, it’s still a good fit.

For those who need deep cover, the Border Patrol also issues the P-2000 SK version that is comparable to other subcompacts out there. 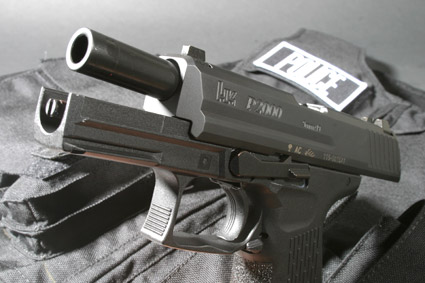 It’s a Shooter
While I tried unsuccessfully to see if there was any statistics on actual shootings with the HK P-2000, it was clearly evident what the general consensus was from the people who carry it—they like it! It’s understandable that agencies don’t want to give out much in the way of specific information regarding such litigious incidents as the use of deadly force.

I have gotten a chance to shoot the weapon, and it handles the hotter 155-grain load the CBP Border Patrol uses without the strong, and pretty brutal recoil I felt when I tried the same loads in my Glock. The recoil was manageable, and much less than I expected. I even shot the SK version once that an agent let me borrow, and it was more manageable with these hot loads than comparable weapons. Some say it has to do with the double recoil spring, others have said it is the better ergonomics of the HK. Whatever the reason, it works.

The LEM (Law Enforcement DAO) trigger pull of the P-2000 is a long soft pull, until it stacks up at the last portion before it lets off. Then, as you let up the trigger for follow-up shots, the reset is quick, and gives what feels like a shorter, crisp pull for the next shot. Accuracy was on par for a duty gun, with groups in the 2- to 3-inch size quite possible. That’s once you get used to the weapon—as is with any transition from one weapon to another. That’s what I found out when I shot the P-2000. I dropped everything until I adjusted to the trigger pull and reset.

After a few minutes I tried point shooting. While I liked it using sights, it really came into it’s own when I went to point shooting. The weapon was like operating on instinct. I was putting all rounds into the center-mass zone rapid fire without even looking at my sights. The grip angle made the weapon’s recoil under the high-power loads very manageable. Overall, this is a very well thought out weapon for a combat duty sidearm.

The people I have spoken to who now carry the gun after as many as 10 years with the Beretta felt very confident with the HK. They initially found the reset of the trigger from the first pull is different from the Beretta. The older gun’s was consistently the same and was a long, albeit smooth pull each and every time. The new HK has a long, light pull until it stacks up at the end of the pull. The reset is much shorter for follow up shots. Once agents can adjust to the new pull, excellent accuracy and follow up shots are within reach. 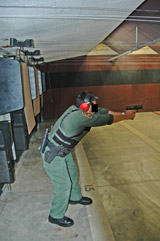 From the Range Staff
While I was speaking to the range staff in Southern California, they told me initially, scores went down with the new weapon. This was, they said, a standard occurrence with the transition from one weapon to another. In the last year or so that they have been issuing the new weapons, they have seen most shooters struggle at first, until they became used to the new HKs.

While at the range I spoke to a few of the shooters there. They concurred that scores dipped, but under the diligent hand of their range staff, they were able to maximize the strengths of the new weapon, such as the trigger reset, and improve. Some said their scores with the P-2000 were some of the best they had attained ever.

If the range staff is any guide, they all carry the P-2000 in either full size or SK. When I asked them about how they personally felt about the new HK, they enthusiastically endorsed the weapon. If these guys are there every day, shooting the same guns, they should know.

I asked if they had any feedback from the field when it came to the weapons. So far, these weapons have gone “bang” whenever the agent pulled the trigger. As of now, there seem to be no complaints.

If what I saw was any judge, these weapons will be winners in the field for a long time to come. The CBP and DHS took their time, did their research, and made the right call in the HK P-2000.