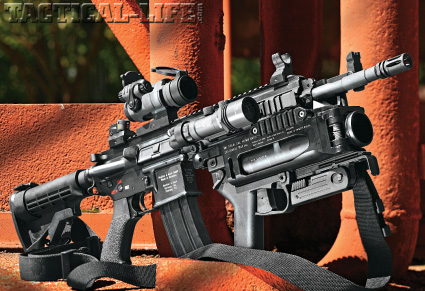 Until recently, the 40mm grenade launcher was almost exclusively dominated by the M203. With the recent adoption of the Heckler & Koch M320 by the US Army, a look back at HK’s legacy 40mm systems is in order. First designed in the late 1950’s, the 40mm grenade system was a stopgap system to bridge the distance between grenades thrown by hand, and the employment of light mortars. Hand grenades are limited by the distance infantryman can throw the grenade, typically around 25 meters. A mortar is capable of dropping rounds as close as 60 meters from the firing position, but the weight of the system and ammunition present logistical and load bearing issues for light infantry. Clearly, a smaller and lighter weapon system was needed to bridge the gap. Enter the 40mm grenade.

Original HK69
The HK69 grenade launcher is a standalone, single-shot, shoulder-fired, breech-loaded weapon. The receiver incorporates the barrel assembly, firing system, and trigger mechanism. Configured with a rifled barrel, the barrel is hinged at the front of the receiver and rotates upward and away from the receiver, much like an over/under shotgun. Like a shotgun, the oversized latch to the rear of the receiver and what appears to be the weapon’s hammer, are actually the barrel release mechanism. By pushing the barrel release latch to the rear, the barrel unlocks from the receiver, and springs open under spring tension. The system lacks an ejector because one is not needed; the additional engineering and weight were deemed unnecessary for a single-shot weapon. Instead, the barrel breech is cut to allow the user to pull the spent cartridge from the breech of the barrel. This design element has continued throughout the HK 40mm system design, and can still be seen within the current M320 design.

Weighing in at 5.75 pounds, the HK69 distinguished itself from the XM148 and the M203 in that it utilized a break action, similar to a shotgun. This design proved to be fruitful, and lived on as one of the most useful designs in 40mm systems. The M203 was limited to a round that is approximately 5.25 inches in length. If the round was any longer in length, the M203 receiver would interfere with the loading of the 40mm round in the M203 barrel. Not so with the HK69. Unlike the M203, the HK69 has no issue accepting oversized 40mm rounds. The barrel is not obstructed by the receiver, allowing the barrel to swing upward and away from the receiver. This design element has also continued to the present, and can be seen with slight variation within HK’s M320 weapon platform.

Until recently, the 40mm grenade launcher was almost exclusively dominated by the M203. With…