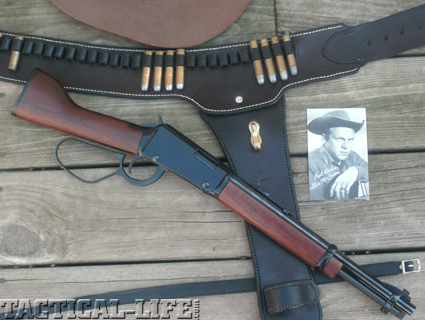 The Mare’s Laig Winchester 1892 carbine was the ultimate gimmick gun during the heyday of the so-called “Adult” TV Western series. This 1892 carbine was chopped off at both ends, and was shot as a handgun and carried in a unique custom holster. Used by future superstar Steve McQueen on “Wanted: Dead or Alive,” McQueen called his lever action handgun a Mare’s Laig because he said that when he shot it with live ammunition it kicked like a mare.

The original Mare’s Laigs, there were at least three, were .44 WCF (.44-40) caliber and used the Hollywood “5-in-1” blanks. These blanks were stretched .38 WCF (.38-40) brass cases rolled over on the end. The same overall length as a loaded standard cartridge, they would feed through the action of a .38-40 or .44-40 lever-action rifle, as well as function in a .38-40, .44-40 and .45 Colt caliber handgun, thereby “5-in-1.” McQueen’s original Mare’s Laigs had 9-inch barrels and measured 19 inches overall length. Being a cut-down rifle, they had to have BATF approval, and McQueen was arrested in New York City while on a publicity tour because the studio had failed to obtain the required paperwork. Unfortunately for me, my home state of Illinois outlaws any rifle with a barrel shorter than 16 inches, even those approved by BATF. So my Eagle Squadron Mare’s Laig, built on an original 1892 Winchester, is correct in all details except the barrel length, which remains at 16 inches.

One of the peculiar things in the BATF regulations is that if the original manufacturer of a firearm takes a lever action and installs a barrel shorter than 16 inches and declares it is a handgun, BATF recognizes it as a handgun rather than a cut down rifle. In the last few years several manufacturers have offered Mare’s Laig clones classified as legal handguns. Most are called Mare’s Legs rather than Mare’s Laigs to differentiate them from the Eagle Squadron guns that are exact copies of the McQueen guns using original 1892 Winchesters as the base gun.

Henry Repeating Arms new Mare’s Leg, shown here with a “Wanted: Dead or Alive” rig made by the author.

With the sizeable cut in income that I will have with my upcoming retirement, I found the new Henry Repeating Firearms Mare’s Leg, available in .22 LR caliber, of special interest. Used strictly as a plinker for practicing hip and point shooting, the .22 LR caliber will allow me to shoot the thousands of rounds required for proficiency without breaking the bank. With its 13-inch barrel and the buttstock cut off just behind the comb, my Henry Mare’s Leg measures 25 inches in overall length. The tube magazine, loaded from the exposed end, holds 10 rounds of .22 LR cartridges.

The Mare’s Leg has standard lever action rifle sights, which I will remove to be more like the McQueen Mare’s Laigs. The wood is quality American walnut with excellent wood to metal fit. And the black hard synthetic buttplate appears to be integral with the wood—the fit is so good. A saddle ring is attached to the left side of the action. The grooved wide trigger breaks cleanly at 43 ounces. The finger loop on the lever is not as large as on the original Mare’s Laig, but it is larger than the standard lever action finger loop. And the action is the smoothest and easiest cocking lever action, out of the box, that I have ever handled. So, how does the Henry Mare’s Leg shoot?

After trying several ways of holding the Mare’s Leg in order to use the sights, I found the best for me was the “rock the baby” hold as described by the late great holster maker Chic Gaylord. The action is rested on my left bicep while my left hand grasps my right forearm. This hold allows me to cheek the short butt stock. At 15 feet, the first 10 rounds went into 1.75 inches including one flyer. Without the flyer, nine shots were in 1.25 inches with seven of them in 0.63 inches, easily covered by a quarter. While I won’t be using the sights for my hip shooting, the Henry Mare’s Leg is easily soda-can accurate. Thank you Mr. Imperato for producing a Mare’s Leg that I can afford to shoot a great deal during my retirement years.

Steve McQueen carried his Mare’s Laig suspended by the saddle ring from a hook on his gun-belt. He eventually used a custom Fast Draw rig from the North Hollywood Gunfighter shop of Andy Anderson. So we need a holster for our Mare’s Leg. Bob Mernickle produces a Buscadero style rig for the Mare’s Leg. The straight cut gun-belt is fully lined with suede, three inches wide tapered to 1½ inches with a solid brass clipped corner Gunfighter buckle. There are 24 laced on bullet loops for .45 cartridges, and I used .45-70 dummy rounds, as did McQueen. The holster is a long drop pouch holster and fully lined. The triggerguard is enclosed, the front lip is cut down to approximately 3 inches below the triggerguard, and 6½ inches of the barrel extends from the bottom of the pouch. The holster shank passes through a slot in the bottom edge of the gun-belt, which is the definition of a Buscadero rig. The pouch has a leather tie down thong to keep the holster in place when one draws the long Mare’s Leg. As one should expect from Mernickle Holsters, this is a top-quality rig. 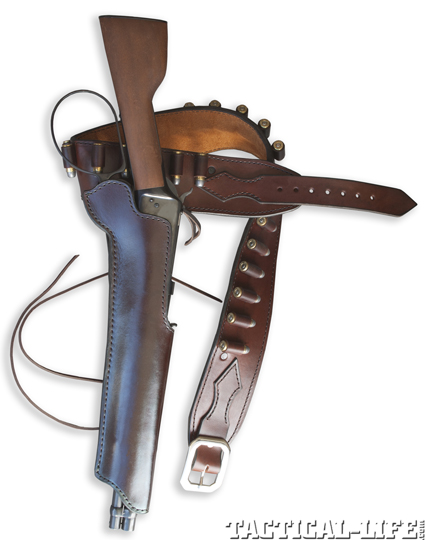 I shot in Fast Draw competition with Bob Munden in two major contests over 40 years ago. Though he did not win, he was amazingly fast. He has set several fastest shot and fastest series of shots records that were never beaten. Many of us in Fast Draw envied Bob and Becky Munden for their success at making a living as professional Fast Draw Exhibition shooters. Recently Bob has appeared on TV’s Shooting USA’s Impossible Shots. While visiting with Bob at his SASS Convention vendor’s booth several years ago he told me of working out a stunt where he balanced a knife, point down, on a support with a target placed just behind it. He then shot the knife, hitting it such as to cause it to flip 270 degrees and stick in the target. I was fascinated when I watched him do it successfully on Impossible Shots.

Bob now has a new DVD titled Outrageous Shooting, which is 122 minutes of amazing shooting feats. Several that are of special interest to me are instinctive shooting, the Munden’s performing their live ammo Exhibition at a SASS End of Trail, and long distance shooting with a 2-inch barrel Smith & Wesson J-frame revolver. But I had to watch this DVD for the episode of vintage Fast Draw competition during the 1960s and 1970s. This includes footage of Bob setting one of his World Records. 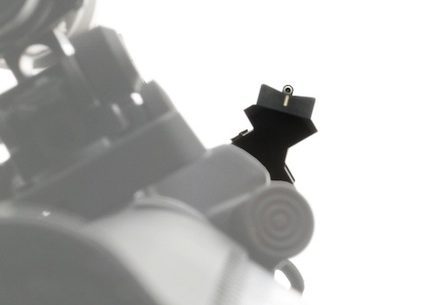