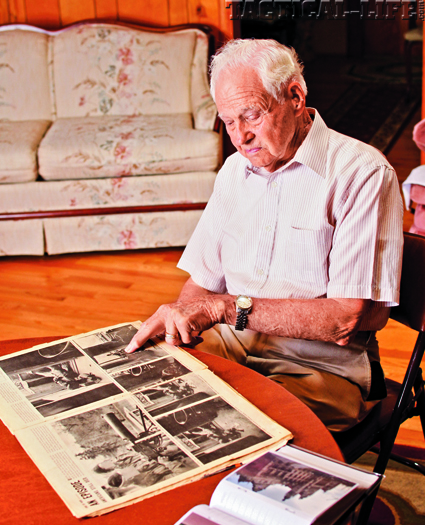 During our visit with Lehman Riggs, the sole survivor from the Leipzig Balcony, he shared very intimate details. 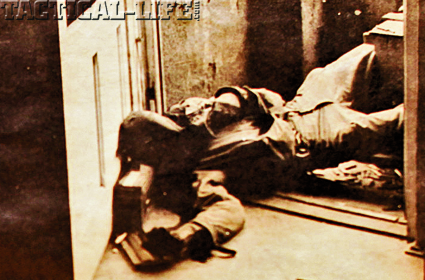 The mystery was recently solved when the sole surviving member of the MG crew, Lehman Riggs of Cookeville, TN, shared his story of that day. “We had taken half of the city, and the city was divided by a man-made canal,” the now 92-year-old Riggs said. “We had to go across these bridges to get to the other side of the city. They had blocked the bridges with burned-out tanks and streetcars, anything that would obstruct us from going across. There was a park in front of this building, and they [German troops] were dug in and we couldn’t see them. We had orders to go up to the third floor of this apartment building and set up our guns to spray that area out there in the park to try to keep them pinned down until our troops could cross that bridge.”

Riggs related that he didn’t know that the famous Life photographer was not one of the Army’s routine combat photographers. “We only fired with one person at a time, and we alternated…one person being exposed all the time,” Riggs said. “I had just been firing the gun, and I just stepped back off the gun and he had taken over,” Riggs said as he pointed to a picture in the Life magazine photo spread. “In 30 seconds, I happened to look up and see the bullet pierce his nose. The bullet that hit him killed him, ricocheted around the room, and it’s a miracle that it didn’t hit me. As soon as he got hit, somebody had to take the gun. I had to jump over him and start firing the gun.”
Riggs revealed that the soldier killed that day was Raymond “Robert” Bowman. Riggs admitted that other American troops had died in the closing days of battle, but Robert Bowman became iconic as the last man to die while defeating Nazi Germany.

Last spring, Music City Honor Flight (MCHF) chartered a jet and flew several WWII veterans to Washington D.C. Lehman Riggs plans to travel with the group on their next trip. MCHF, a program honoring Nashville-area WWII veterans, helps fly them to Washington D.C. to see the World War II Memorial. The next all-expense-paid trip (costing $60,000) is scheduled for September 5, 2012.

According to retired Army Colonel John Furgess, President of MCHF, “16 million Americans served during WWII. Now there are probably just a little more than 2.7 million still alive. However, we are losing them at a rate of anywhere from l,500 to l,700 a day. So it is urgent that we take as many as possible to see the memorial that was built to thank them for their service.” 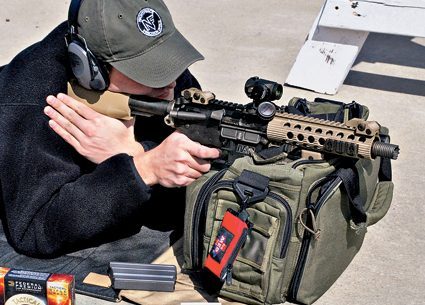 During our visit with Lehman Riggs, the sole survivor from the Leipzig Balcony, he…