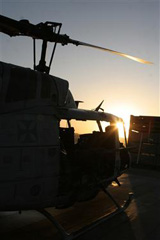 The year was 1971. That year, President Richard Nixon began reducing the U.S. troop presence in Vietnam from more than 250,000 to 196,700. Walt Disney World opened in Orlando. Boxer Joe Frazier defeated Muhammad Ali at Madison Square Garden, the voting age changed from 21 to 18 and Jim Morrison of The Doors was found dead.

All of these events will live on in our nation’s history, but 1971 marks an event specific to the United States Marine Corps as well, the birth of the UH-1 ‘Huey’ helicopter. Now, after more than 30 years of faithful service, the old is replaced by the new, with the entrance of  the new Huey,  the UH-1Y ‘Venom’.

Lessons learned throughout Vietnam in the 1960’s proved the Marine Corps needed armed escort helicopters to suppress enemy fire in landing zones.  This led to the purchase of several Bell UH-1E and UH-1H helicopters for Marine Observation Squadrons (VMO), which became the first generation of the Huey family in the Corps.

During the early years of the Huey, it carried more than 5,000 pounds of cargo, had room for 13 Marines, traveled 125 miles per hour and had a range of 275 miles.

“It truly is a jack of all trades,” said Ben Kristy, an aviation curator at the National Museum of the Marine Corps.

As time went on, the Huey matured into the aircraft faithfully serving the needs of the Marine Corps in Iraq and Afghanistan today.

“Over the years, the Huey has changed equipment and [has] been upgraded per the needs of the Marine Corps,” said Master Sgt. Jorge Alvarado, the maintenance chief with Marine Light Attack Helicopter Squadron-169 and crew chief by trade.

With more than 18 years experience with the Huey, flying in more than ten countries, Alvarado has seen his share of the modifications and upgrades the Huey has undergone.

“They might have the same airframes but the fact is that they are well-kept and are only as good as the Marines working on them,” he said.

The youngest member of the UH-1 family, the UH-1Y ‘Venom’, is making its combat debut with HMLA-367 when it arrives in Afghanistan later this year.

The legacy of the UH-1 family continues on with an active role in Marine Corps aviation.

“Whereas the UH-1N already does a great job, the UH-1Y will do even better,” said Isaacs. “It will expand the envelope for Marine Expeditionary Brigade-Afghanistan and be a true force-multiplier.”

The year was 1971. That year, President Richard Nixon began reducing the U.S. troop…