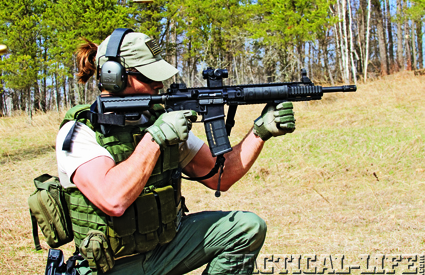 Piston-driven AR-15 rifles are becoming the norm these days. Once a sort of specialty rifle, they have really caught on. And they certainly have their advantages. Most are more reliable with various types of ammunition. Many have adjustable gas systems, allowing the operator to adjust for differing loads or suppressor use. They tend to run cleaner and cooler. With little or no gas going back into the bolt group area, they tend to run better under dusty and dirty conditions. When they work, they can be an improvement over the standard gas impingement design.

They do have a couple of drawbacks, however. They can be a tad heavier depending on the gas system used. Some are less capable of accepting the many forend systems available these days. There are quite a few that must use the system that comes with the gun, so changing out rails, for example, is just not possible. Sure, a rail is a rail, but many operators want to use their preferred equipment.

Lastly, they can be less accurate. Not necessarily less accurate in general, but over a broad range of ammunition, they can be less consistent. In my testing, some piston rifles will shoot one round fabulously and another miserably. Most of the impingement guns seem to shoot about the same with less variance. The vast majority of rifles built with precision in mind remain gas impingement systems. This has certainly been the case for me with any of the larger calibers, and at times with 5.56mm rifles, too. So, when I got the opportunity to test the Huldra Arms Mark IV Tactical Elite, I jumped on it.

Huldra Arms’ rifles are manufactured to their specifications by Adams Arms. The Adams Arms gas piston system has been around for a while and has become one of the most popular on the market. Its ability to be retrofitted on a standard direct impingement gun has added to its popularity. It is pretty simple, utilizing a drive rod to impact the bolt carrier instead of direct gas. This rod uses a machined step in the rod to stop its movement, with a spring to slow it down. Unlike other systems, the Adams Arms system will still run if this spring breaks. A spring-loaded bolt is also used in order to cut down on cam pin wear. The gas system is adjustable for differing loads or suppressor use.

There are several advantages to this particular system. It can be used with several different forends, many with little to no alteration. The entire system can be accessed from the front, making cleaning and takedown a breeze. There are not many parts, so cleaning is easier in this respect, too. The Adams system also tends to run cooler at the bolt group. There is still heat, of course, but it stays near the handguard and gas block, and less is transferred to the bolt, bolt carrier, and the rest of the internals. Its design vents the gas forward to keep it out of an operator’s face. 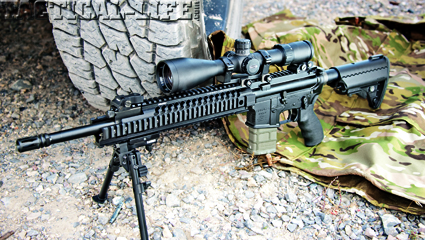 The rest of the rifle is produced by Huldra and includes a number of their own accessories. The piston system and barrel have been treated with their salt-nitride-meloniting process and is placed in a mid-length free-floated handguard. The 16-inch 4150 chrome-moly-vanadium barrel has a 1-in-7-inch twist rate with M4 cuts in the chamber for reliable feeding. Both the upper and lower receivers are machined from 7075-T6 aluminum forgings that are then Type III hardcoat anodized. The supplied JP EZ trigger is crisp and precise with a 4.5-pound trigger pull. The rifle’s supplied ambidextrous safety is very positive and fit perfectly. The Tactical Elite also features a Vltor IMod stock and an Ergo Grip.

The rifle also included a set of their folding battle sights, a couple of different panels for the rails on the forend, sling swivels, and a sling as their recommended accessories. To facilitate testing, I added a few items: a Weaver 3-15×50 Tactical scope mounted in a Nightforce Unimount, as well as a BlackHawk Precision Tactical Bipod, to wring out the greatest accuracy possible.

I zeroed the rifle and then tested it for accuracy. Most of the testing was done with a Designated Marksman Rifle (DMR) in mind—not that this was set up to be a precision rifle, but it should be very accurate given its specifications. It certainly did not disappoint. All of the accuracy testing was performed from a prone position using the bipod. The weather cooperated, so I only needed a simple Eberlestock shooting mat. 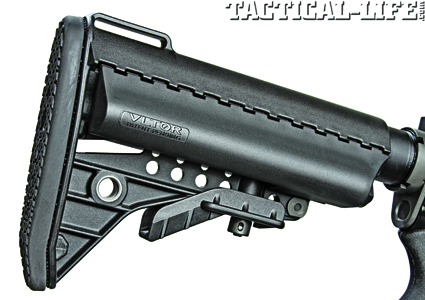 Vltor’s IMod buttstock is lightweight and easy to adjust so shooters can find the correct fit with the rifle.
The best group was produced with the Hornady 60-grain TAP, measuring 0.80 inches. Even the worst group was only a bit over an inch, so in truth, it shot everything tested pretty well.

The Weaver scope really shined here. The glass is incredibly clear and the knobs are really convenient. You simply pull up on the knob, make your adjustments and push it back down. Once you are done, push the knob down, unscrew the cap on the top, pull the knob up, set it on zero, and screw the top back in. It was fast, and best of all, there are no tools necessary. The tube feels very solid, the mil-dot reticle was sharp, and its adjustments were accurate. The Tactical scope is compact and still has positive magnification adjustments.

The rest of the testing was done on the move and around the vehicle, mostly simulating operational deployments. Cars are not always the best cover or concealment, but at times they are the best you have. Working in an urban environment, there are always cars parked on the street. Being able to work around and under vehicles is critical. This is where a bipod is a really nice piece of equipment. The Blackhawk bipod proved to be solid and fast to get into action. It was pretty easy to work around my truck tires and still maintain my cover behind as much of the wheel as possible. The Vltor stock is one of my favorites, so it was well-suited to the task and allowed for a solid cheekweld in many positions.

Most of the shooting was done with a 20-round PMag to accommodate use in a prone position with the bipod. Once the accuracy testing was completed, I accomplished some CQB work with the scope on 3x magnification. The rifle came through with flying colors and never missed a beat. It was pretty fast to point, and the weight of the scope did not seem to be an issue. The longer handguard was nice and is quickly becoming my favorite on AR platforms. The extra space allows for solid close work and comfortable handholds for unsupported shooting at longer ranges. The Mark IV turned out to be a really versatile system. 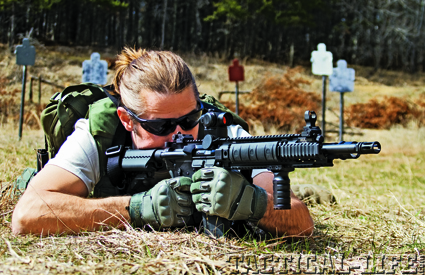 Sometimes piston systems feel like they produce more recoil, or at least more of an impulse. That did not seem to materialize for me. In truth, it may be all the time I’ve spent lately with a .308 sniper rifle, but this rifle just stayed put. Repeat shots were easy and fast, with very little movement. The fit of the safety was another nice touch—it felt crisp and showed no signs of creep. It’s a little thing, but it’s noticeable. This safety was set up perfectly.

Huldra designed a really solid rifle here. It is built by Adams Arms, but the specification is nicely done. And it’s refreshing to see them be honest about it on their site. Many AR-platform rifles these days are built by someone else and you never know. The Mark IV Tactical Elite is an excellent rifle, one of the more accurate piston guns tested. It was also consistent—something you don’t always see with piston guns. The only complaint was the nylon case; the zipper broke the first time it was used. Everything else provided with the rifle was top-notch, though, and could easily be placed into service on any street or with any team. With an MSRP of $1,499, it is priced well—especially for what you get. If you are looking for a piston rifle and want a reliable Adams Arms system, make sure you give Huldra Arms a very close look. 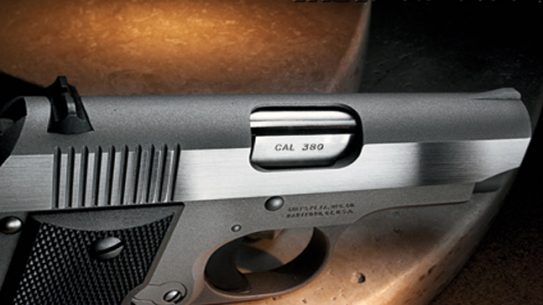 The Colt Mustang Pocketlite .380 ACP handgun is a pint-sized thoroughbred that breaks out...