0
SHARES
0
VIEWS
Share on FacebookShare on Twitter
Wanted: TW would like to hear from you! Email your submission and photo to Tactical-Life@harris-pub.com. We pay $100 for any featured story! 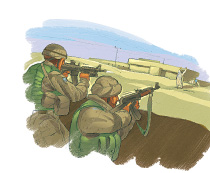 With reports of the Taliban evicting elected authorities and terrorizing the locals, the men of Special Forces Detachment 372 mounted their vehicles and headed out for the Cahar Cineh Valley in the Oruzgan Province to set things right. The team traveled through the night and hid the following day. That evening they met with one of their local contacts who agreed to guide them to the compounds where the Taliban were planning their operations.

The team was spotted approaching the compound and arrived as the remaining Taliban fled. The team and their Afghan counterparts quickly surrounded the buildings and began their room-by-room search. During the search, the last few Taliban tried to make a run for it. One of the team members spotted the fleeing Taliban and began firing the .50-cal machine gun in front of them to cut off their retreat. The Taliban decided to stand their ground rather than run into the stream of .50-cal lead. Two remaining team members maneuvered to capture the two Taliban. Once the SF soldiers were 100 meters from their enemies, the Taliban decided to fight rather than be captured. They picked up their weapons and began to point them at the American soldiers. Both SF soldiers fired, killing one Taliban member and wounding the other.