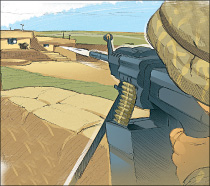 On July 22, 2003, I left on what I thought would be another boring mission in Mosul, Iraq. The day started like any other, with mounted patrols and hot weather. Towards the end of the day, Special Forces elements contacted our unit and tasked us with surrounding a compound in which they were interested. Much to my surprise, Uday Hussein (Saddam Hussein’s son) came out of the house to see what was happening and saw that U.S. forces had surrounded him. The firefight began.

I was carrying an M249 SAW (Squad Automatic Weapon). I soon discovered that I had little cover to protect me and so I began to fire the SAW left-handed. My optic mounted to the SAW provided too much magnification for the short distance to the target, so I drew my knife and cut several tie-downs, freeing the optic from the weapon. I used the iron sights for the rest of the time.

Shortly after the firefight began, Uday retreated back into the compound. We called in several helicopters to engage the compound with their guns and missiles and fired a few TOW missiles of our own. After a few hours of shooting, U.S. soldiers entered the compound and found four bodies. Two of the bodies were later identified as both Uday and Qusay Hussein. 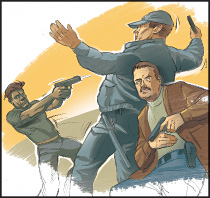