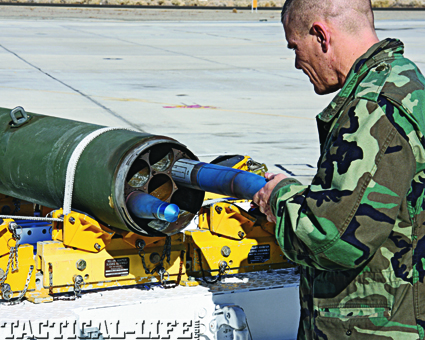 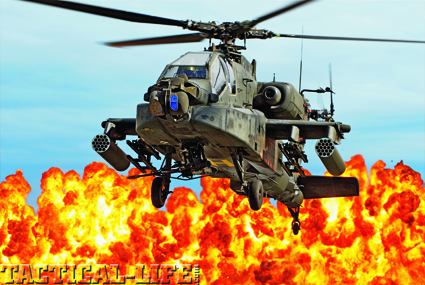 The U.S. Army’s AH-64 Apache helicopter usually carries a combination of Hydra 70 rockets, shown in pods on tips of the weapon pylons, as well as Hellfire anti-tank guided missiles, mounted on rails inboard.

On an Afghan hillside, insurgents wait for a military convoy to pass on the road below. They are dispersed and well dug in, ready to attack “infidel” troops when they come. Suddenly the fighters hear the familiar drumbeat of a helicopter rotor, one of the hated gunships that fly convoy escort missions. While the helicopter is troubling, the insurgents don’t panic. Even if the gunship crew sees them, costly anti-tank missile fire into their positions is unlikely and the helicopter’s rockets are notoriously inaccurate.

Loading the Hydra 70 rocket pod is relatively easy. This armorer is inserting a rocket in a seven-tube, light attack pod, while larger pods can carry and launch up to 19 rockets.

The gunship veers toward them and makes a sudden low pass near the hillside. A couple of overeager fighters open fire, but the paths of their tracer rounds are well off target. The helicopter pulls up, facing the hill beyond rifle range. In seconds, insurgents watch the smoke trail of a Hydra 70 rocket spin toward them, and it strikes, almost on top of a fighter’s position, churning up a thick cloud of debris. A lucky hit, the others think, just as a second rocket destroys another fighting position. Luck has nothing to do with it now. The insurgents scatter, fleeing a new precision weapon that will turn them all into debris if they remain on the hillside.

By next year, this scenario may soon be all too real for Taliban and other rebel fighters in Afghanistan and combat theaters in which U.S. Marine AH-1W Cobra gunships and other gunships are engaged. That’s the planned fielding date for the Advanced Precision Kill Weapon System (APKWS) II, a kit containing a semi-active laser homing guidance and control system that converts unguided 2.75-inch Hydra 70 rockets into precision-guided munitions. 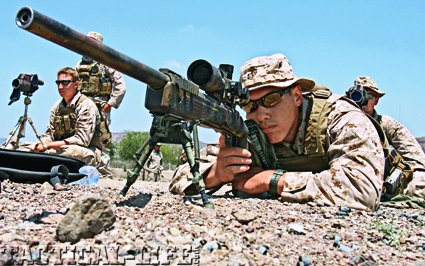