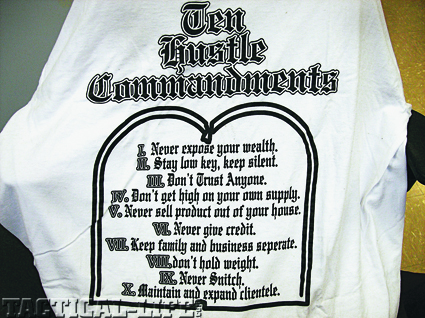 Contemporary gang members are notoriously proud of their involvement, making themselves conspicuous through t-shirts, “uniforms” or tattoos. While this helps in spotting street thugs, it also illustrates just how brazen they can be.

Bonnie and Clyde, Baby Face Nelson and Al Capone may bring forth romanticized images of violent criminal gangs, but Hollywood’s versions bear little resemblence to reality. According to Bryan Burrough’s book, Public Enemies (Penguin Press, 2004), the 5-foot, 4-inch, Baby Face Nelson (real name Lester Joseph Gillis) first served time at age 12 for a shooting. His obsession with guns and extreme violence (he laughed while firing his submachine gun at women and children in at least a couple of his robberies) relates directly to the thugs on the streets of urban and suburban America today.

The violent criminal cycle within the United States (and the world) continues on – Crips and Bloods, then the Folk Nation and the Peoples Nation, then onto today’s gangs: MS-13 (Mara Salvatrucha), Latin Kings, Hells Angels, The 18th Street Gang, Mexican Mafia, Vice Lords, Outlaws, Asian Boyz, on and on — including street gangs of a local nature. Street gangs are usually comprised of members of the same race and ethnicity, but there are also gangs that are multi-racial.

Drug trafficking is usually at the center of a gang’s focus. Whether it’s crack, cocaine, meth, heroin or any and all other illicit and pharmaceutical drugs, these gangs sling it for cash. Hand-in-hand with the drug sales is weapon procurement and use. In order to protect their criminal enterprise from other street gangs, rip-offs and the police, these mutts arm themselves with deadly weapons that make them a serious threat to not only LE officers, but also the innocent citizens the officers are sworn to protect. Armed with these weapons, and entirely willing to shoot up entire neighborhoods and endanger the innocents around them, these remorseless killers are a deadly threat.

Officer’s Risk & Safety
First and foremost in the gang enforcement officer’s or investigator’s playbook is to understand the danger posed by gang members. Just like wolves that travel in packs, the bloodlust is magnified when these criminal malcontents get together and fuel themselves with alcohol and drugs. Just like Lester Gillis (Baby Face Nelson) who was imprisoned for a gun related incident at age 12, a 10 or 12-year-old gang-banger can be a stone cold killer and should not be underestimated.

It would also be unwise to think that gang members are stupid or not resourceful. Both street gangs and outlaw motorcycle gangs have used informants and the Internet to obtain addresses of police officers. This has led to drive-by shootings, bombings and the murdering of officers.

Street gangs respect power and the potential for force. Walk into their midst like Sheriff Taylor, all smiles and “community policing” attitude and they’ll hurt you. Gang cops know that they have to plan for adequate back-up and must always watch their six.

Contact and cover is an officer safety concept that was developed by the San Diego Police Department after two of their own were killed checking out suspicious persons in a park. The contact officer(s) handle the business of the call. They pat-down any suspects, conduct field interviews, handcuff if necessary, run radio checks for warrants, and so on. The cover officer(s) job is to watch the suspect(s) and the area. To provide 360-degree security and alert the contact officer of any dangers, intervening with force if necessary. Ambush and drive-bys against foes and officers is a favorite tactic and must be planned for and prevented. Contact and cover is a lifesaver.

If gang officers feel at risk, guns are drawn and suspects are covered at gunpoint. The old notion that, “the only time my pistol comes out of the holster is when it’s smoking” is ridiculous. On the street, violence can erupt at any time and the threat of deadly force is an important part of preventing an assault. Officers can draw their pistols or long-guns and order suspects to the ground in a prone or kneeling position if they feel threatened.

Pat-downs or suspect searches are conducted with control first and foremost. Contrary to some street thug’s excuse, the crack fairy didn’t put the dope in their pants (or stuff it up their derriere) and the gun fairy didn’t put that pistol in their pocket. Going hands-on during searches is a time of extreme risk. Handcuffing a suspect once the dope or gun is found is even more dangerous. The majority of police officer murders and assaults in this country take place when investigating suspicious persons and making arrests. Gang officers must never become complacent and must always be prepared for resistance during this process. Many times the air or attitude of a prepared and aware officer can prevent violence from occurring because the gang-banger weighs the risks and decides it isn’t worth it.

Gathering Intel
The best way for gang officers to do their jobs is to develop sound intelligence on gangs and their members. From information gathered during field interviews, arrests, rival gang members, or suspects trying to make a deal to reduce their charges, gang investigators compile a working knowledge of who and what is happening on the street. In order for this process to work, street patrol officers must be able to give information as well as get information on gang-bangers. There was a time in law enforcement that intelligence files were thought of as restricted and not to be shared. This antiquated notion flew in the face of the reality that the gang officer or investigator’s best friend is the patrol officer working the districts. These officers usually know their patrol area and what’s moving and shaking on the streets. If a sound two-way flow of information exists and the patrol officers can see the results of their input (and are involved in the arrests) they are more apt to forward intel.

Street names are recorded as well during FI (field interviews). Street names or gang monikers are vital to identifying gang-bangers involved in narcotics trafficking. Narcotics personnel making a controlled-buy (monitored transaction using an informant) may only be able to identify the dealer as “Bo-Bo.” Gang files including photographs can be used by narcotics, homicide and crimes-against-persons detectives to help identify killers, dealers, and all others involved in criminal activity.

Fortunately most jails record gang involvement at the time of booking and during incarceration. Most prison systems have gang officers assigned to keep track of gang members and activity at state and federal prisons. So prevalent is gang activity behind bars that it seems like a lockdown of one or more prisons occurs each week in this country. Look at riots and mass stabbing attacks in prisons and you’ll most likely see a gang connection.

Most gang members are proud of their involvement and brand themselves for life as members or gangs such as the Vice Lords or MS-13 by way of tattooing. During FI encounters, arrests and jail booking, officers can request or demand that photos of tattoos and their locations be taken. It’s hard for some mope to deny gang involvement when he has the gang name tattooed across his chest.

Graffiti has long been a way for gang investigators to keep track of members, feuds, territory, activity in an area and the presence of new gangs in their jurisdiction. Photographing gang graffiti just like tattoos is vital to investigators.

Arrests
Most states now have criminal enterprise or laws specifically targeting gang actions or involvement on the books that allow increased jail time for suspects arrested for gang activity. In addition, federal RICO (Racketeer Influenced and Corrupt Organizations) laws can be used against these members. Large cities usually have task forces comprised of federal, state and local law enforcement officers who work together to pool resources for enforcement against violent criminals and gang members.

Takedowns of gang-bangers are usually performed by SWAT or specially trained/equipped task force members. Countering potential resistance with the potential for more force by well-trained operators is a sound tactical concept. In this arena more gang officers, tactical personnel and line officers are arming themselves with 5.56mm carbines. Rolling out of a car and confronting a group of gang-bangers with M16’s or M4’s gets their attention and lets them know you’re serious.

Police use of force in this country is governed by the objective reasonableness standard of the Fourth Amendment to the Constitution. Is it reasonable to apply force quickly and surely to a violent gang member that has a history of armed attack? The courts have held these acts as reasonable when viewed in the totality of circumstances.

Final Notes
Violent criminal gangs have been documented in this country since the 1800’s, as depicted in Martin Scorsese’s 2002 film, Gangs of New York. During the 1930’s the Barrow Gang (Bonnie and Clyde), Nelson and others terrorized this country. The gangs and mobs of Chicago, Cleveland, New York and elsewhere during the Prohibition-era through the street gangs of the 1960’s (as typified by the Mau Maus as told in the autobiography of Nicki Cruz, Run Baby Run), and on to today’s hyper-violent gang-bangers. Whether it’s a young and smallish societal outcast such as Baby Face Nelson or some other thug with a chip on his shoulder, tattoos on this chest and a gun, violent street gangs have been around for a long time. The dedicated law officer with a burning desire for safe streets and justice is our best defense against them. 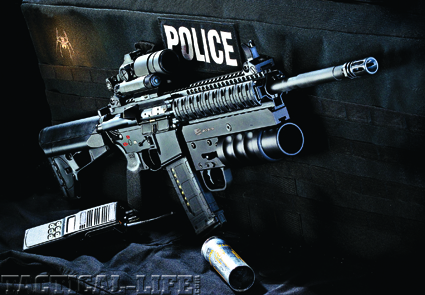 Contemporary gang members are notoriously proud of their involvement, making themselves conspicuous through t-shirts,…