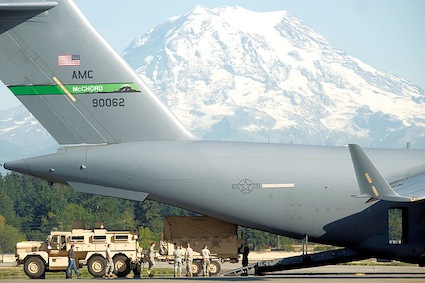 Not long before Sgt. Jose Rodriguez lost his life in southern Afghanistan, he saved at least one life among the Joint Base Lewis-McChord soldiers he loved and called brothers.

When his Stryker platoon sergeant and two other soldiers were injured by an explosive in combat last month, Rodriguez used his first-aid training to tend to the wounded.

Sgt. 1st Class Eric Hoover said he was bleeding heavily from his left arm. Even after Rodriguez applied a tourniquet, the flow wouldn’t stop.

When Hoover looked at his arm and discovered a bone protruding, he passed out. He woke to find Rodriguez – or “Rod,” as his friends call him – applying a second tourniquet.

Rodriguez stayed with all three men until a helicopter arrived to take them to safety.

“I wouldn’t be here today if it wasn’t for Sgt. Rodriguez,” Hoover said at a memorial service Wednesday at Lewis-McChord. “I can never repay him for what he’s done.”

Read the rest of Adam Ashton’s article at The News Tribune.

In North Dakota, spies in the sky signal new age of surveillance.