The classic design of the M16A1 still holds a lot of appeal, for both collectors and shooters alike. Dubbed the C15A1 Sporter, the new 5.56x45mm rifle from Century is a combination of demilled original M16A1 rifles and new AR parts. Shown equipped with an Ontario Knife Company M7 bayonet.

To call the AR series of rifles iconic and influential would be the understatement of all understatements. When first developed by Eugene Stoner and ArmaLite as the AR-10 in 7.62x51mm for the U.S. military trials to replace the M1 Garand, the AR was frankly unlike anything seen before.

In an era of walnut and steel firearms like the Garand—and other classics like the M1 Carbine, the Johnson rifle, and the Browning BAR—the AR-10 was something of an outlier. Its unique characteristics stemmed not only from the materials from which it was constructed, but also the nature of its design and operation. And, thanks to the efforts of Century Int’l Arms, you can own you own version of one of the earliest variants of this classic design.

At the request of the U.S. Army, the M16A1 incorporated a “bolt closure device,” known to most of us today
as the forward assist assembly.

Uniqueness
So what made the AR so unique? First and foremost, the design employed lightweight alloys and advanced synthetics that required not only precision manufacturing but also ultra-modern manufacturing techniques. In addition, the new AR-pattern rifle featured advanced ergonomics made up of a separate forend and buttstock assembly complemented by a vertical pistol grip.

Although the U.S. military did not adopt the AR-10, the M14 in 7.62x51mm it chose had a rocky road ahead of it, and one that led to a second chance for the AR upstart. Shortly after the adoption of the M14 and the new 7.62x51mm NATO cartridge, the U.S. military began considering the use of a small caliber, high velocity (SCHV) cartridge. To address this, ArmaLite engineers set about taking the AR-10 design and scaling it down to fire the cartridge that would ultimately become the new 5.56x45mm NATO cartridge, but ultimately sold the design (dubbed the AR-15) to Colt due to financial strains.

The early M16s produced by Colt personified the early iconic Vietnam-era rifles, featuring the standard 20-inch barrel and sporting such features as the open pronged flash suppressor and the distinctive triangular-shaped handguard. One of the earliest significant variations to the basic design was the M16A1, a variant developed at the request of the U.S. Army that incorporated a “bolt closure device,” known to most of us today as the forward assist assembly. The Army’s argument was that with no reciprocating charging handle attached to the bolt carrier, there was not way to ensure manually that the rifle was fully in battery. Other additional enhancements included the switch from the open-pronged flash suppressor to the “birdcage” style unit.

The A2 pattern lower receiver and A2-style pistol grip are indicative of the hodgepodge of A1 and A2 parts, although this will only matter to the more ardent of the purists.

Unfortunately for civilian shooters, semi-auto variants of the M16A1 are few and far between. Fortunately, Century International Arms has a new offering that aims to address this issue. Dubbed the C15A1 Sporter, the new 5.56x45mm rifle from Century is the result of a combination of demilled original M16A1 rifles combined with a new AR parts that offers civilian shooters an opportunity to own a version of this classic for themselves.

Is the C15A1 an exact replica of the M16A1? Not exactly. First and foremost, the new rifle had to be semi-automatic only for legality, which required the addition of a new lower receiver and semi-auto fire control parts. Also new is the barrel, which features a 1-in-9-inch rate of twist.

Notably, there are a few “quirks” with the C15A1, such as the use of an A2 pattern lower receiver and A2-style pistol grip. The result is something of a hodgepodge of A1 and A2 parts, although this will only matter to the more ardent of the purists. In the big picture, though, the C15A1 is a unique opportunity to own a rifle very close to the original A1, and for a very reasonable price. And, as soon as I saw they were available, I requested one to try out for testing and evaluation.

The rifle came packed with a cleaning kit, two original Colt 30-round magazines and a single Thermold 20-rounder. The fit and finish of the rifle was quite good, with an evenly applied black anodized finish on the upper and lower receivers and a matching black phosphate finish on the steel parts.

Range Time
The first thing I noted was the light weight of the rifle. Having never held an A1 pattern rifle before, I was struck by it all around handiness. Having spent most of my days with the heavier A2 and later variants, I really understood now the charms of this handy little rifle (particularly when compared against the M14 of its day).

The other thing of note to me was the many A1 peculiarities, such as a short 13-inch length of pull, the triangular handguard, a birdcage suppressor with open slots on the bottom, teardrop shaped forward assist button, and a simplified rear sight assembly. I was very pleased to have an opportunity to try out this historically interesting variant for myself.

I headed out to the range with a selection of Black Hills, Federal American Eagle and Winchester ammunition to put the C15A1 through its paces. I set up the rifle on the bench, and proceeded to work on targets at 100 yards with the open iron sights. I soon noted that I was having trouble getting on the paper. Moving up to 50 yards, I found that the rounds were hitting well to the left of the point of aim, and beyond the range of adjustment of the rear sight. I noted that the groups were quite tight, though.

A quick call to Century, and the rifle was on its way back for them to examine. A few days later, the rifle was returned to my FFL with a note explaining that the front sight base had been slightly canted, but was repaired. I headed back out to the range, set-up back on the bench and started up at it again. The rifle was now hitting dead on, and the issue appeared to be resolved.

Overall, I was very impressed by the rifle’s performance. There were absolutely no malfunctions during the testing, and the accuracy that I had observed in it before the sight problem was address was still present—and now on target. Overall, I averaged in the 1.5- to 2-inch range at 100 yards with the rifle when I did my part. I also found that I appreciated the handling characteristics of the rifle, namely the short length of pull and flat-based handguard. I also had an Ontario Knife Company M7 bayonet on hand that I tried out on the rifle and that further added to its retro appeal.

All in all, the C15A1 offers what I think to be a nearly irresistible product to the U.S. civilian shooter—specifically, an opportunity to own a version of a U.S. military classic for a very reasonable price. I would recommend picking one up while they are still available.

For more information, contact Century International Arms at 800-527-1252, or visit them on the web at Centuryarms.com. 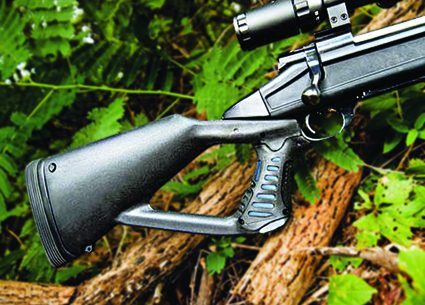 New Guns and Gear That Caught Our Eye

The classic design of the M16A1 still holds a lot of appeal, for both…