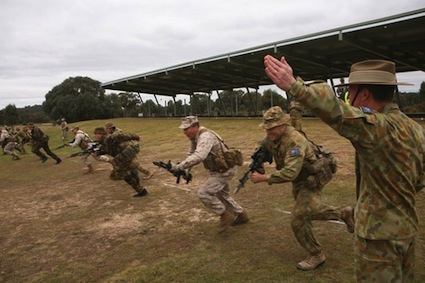 Sometimes it takes an international competition focused on military skills to include a course dedicated to the venerable bayonet.

The simple piece of steel adorning the muzzle of rifles has changed little since it’s advent with muzzle-loaded firearms centuries ago; so it was fitting that the event dedicated to its use was simple and to the point.

The bayonet course was one of more than 100 events held during the Australian Army Skill at Arms Meeting 2011 (AASAM), an annual, international meeting dedicated to combat marksmanship.

“The bayonet course had you sprint up and stab the target and shoot five rounds at the 100 meter line within 20 seconds, and then advance to the 50 (meter line) to shoot five more rounds,” said Sgt. Brandan Jansan, competitor, Combat Shooting Team, Weapons Training Battalion, Marine Corps Base Quantico.