Though it has enjoyed a successful, if occasionally controversial career that has spanned more than four decades, the sun appears to be setting on the venerable M16. Thus, it’s only natural as warfare, strategy and tactics continue to evolve and change, that the M16 would indeed be phased out.

Growing Pains
At first, both the US Army and Marine Corps were appalled at the idea of switching to such a radically new design and vehemently resisted it. Quite happy with their full-sized M14s and the 7.62x51mm NATO cartridge for which they were chambered, it took recurrent complaints during the early days of the Vietnam conflict about the weapon’s unwieldiness in the jungle, weight and lack of full-auto controllability to initiate the change.

While it had performed well during preliminary combat testing in Vietnam in 1960 to 1961, the M16 got caught up in a series of inexplicable errors on the part of the US Army.

The first of these dealt with ammunition. Originally, IMR (extruded) powder had been used in the 5.56x45mm (.223) cartridge for which the M16 was chambered, but at that point in history, the Army was changing to ball powder to lower ammunition production costs and time. Somehow during the process, the M16 itself was not altered to handle the different ballistics of the 5.56mm as loaded with ball powder with catastrophic results.

Cyclic rates skyrocketed from the original spec of 750 rpm (rounds per minute) to over 1000 rpm and chamber/receiver fouling increased dramatically, causing constant malfunctions.

A second problem was that the Army ignored Eugene Stoner’s recommendation that the chamber and bore be hard-chromed to prevent corrosion in tropical areas, resulting in a substantial increase in corrosion, which further aggravated the malfunction problem in the M16s.

A scandal erupted in 1965-66, when on a half-dozen occasions US troops in Vietnam were overrun and killed by Viet Cong (VC) insurgents and their North Vietnamese Army (NVA) counterparts. Subsequent investigation showed that most of those killed had been trying to clean their disassembled M16s, and the fact was quickly and loudly trumpeted to the world by the news media.

In turn, this led to a general loss of faith in the M16, often to the point where many personnel flatly refused to use it. As the refusals approached the point of troop mutiny, the commander of US forces in Vietnam, General William Westmoreland, contacted the US Army Ordnance Department and advised them that if they failed to correct the problem within 30 days, he intended to pull the M16 from service and replace it with the ArmaLite AR-18 (which had also been tested and approved).

Faced with an ultimatum from a theater commander, who also had the ear of then President Lyndon Johnson, they quickly determined the nature of the problems and corrected them. From that point onward, the M16’s mechanical performance was, and remains, exemplary to this day.

The third problem, however, dealt with a less obvious issue: stopping power. As presented by its designer and used in the early combat tests, the “XM16” had utilized a 1-in-14-inch rifling twist with the effect that its bullets were barely stabilized. Upon contacting anything its bullets would destabilize and tumble, causing fantastic wounds and excellent stopping power, even with FMJ military ammo.

The problem was that the Army and Marines weren’t the only organizations who intended to use the M16. The US Air Force had plans to replace their aging M1 .30 caliber carbines with it as well. In the process, they discovered that in sub-zero climates (where the USAF had a number of installations), a 1-in-14-inch twist would not stabilize bullets well enough to meet US military accuracy specifications and requested assistance from Springfield Armory (then a US government installation).

Incredibly, there was no one individual in charge of the US military rifle program and an unknown technician arbitrarily authorized a change in rifling twist to 1-in-12 inches, not just for USAF rifles, but for all M16s. The result of this amazing decision was a 40-percent reduction in the weapon’s wounding effect, and thus it’s stopping power, due to increased bullet stabilization.

Throughout its use in the Vietnam War (1965 to 1972), and again in Grenada and Panama, complaints about poor stopping power continued to be heard. And even more incredibly, instead of correcting the problem, the US Army (who handles all small arms development for all the US armed forces), further exacerbated the problem in 1983 with the adoption of the 1-in-7-inch twist M16A2.

To utilize the longer, heavier (SS109) 63-grain 5.56mm bullet, it needed to meet emerging 5.56mm squad automatic weapon requirements (eventually evolving into the M249 SAW), a more rapid twist was needed. However, this had the effect of reducing (by perhaps an additional 20 percent) the M16’s stopping power even more. By the time it had been used in Operation Desert Storm, Afghanistan and Operation Iraqi Freedom, the number of stopping power complaints had reached epidemic proportions. Even Iraqi insurgents and al Qaeda terrorists have publicly scoffed at the M16 (and its M4 variant), claiming that they had no respect for the weapon.

In truth, it must be said that this complaint has nothing to do with the M16 per se, except for the 5.56x45mm cartridge it utilizes. For example, M4 variants of the M16 chambered for the new experimental 6.8x43mm Remington SPC used in Afghanistan during the last two years by US Army Special Forces personnel have thus far generated no such complaints. It is quite the opposite with both sides commenting very positively upon the weapon’s effectiveness. Still, fairly or not, the lack of a solution for the 5.56mm’s poor stopping power has severely tainted the M16’s reputation.

Positive Aspects
On the positive side, the M16 is arguably the most “user-friendly” rifle in US military history. It has excellent sights, good balance, a perfectly located selector switch and magazine release button, a flared magazine well for fast magazine insertions and a highly effective flash suppressor. Compared to its only real competitor, the AK-47, it’s a luxury sedan as compared to a compact car.

Yes, I know, the AK is mechanically reliable with little maintenance, but that’s its only real asset. But let’s keep this issue in its proper perspective. With only minimal maintenance, the M16 is quite reliable as well. To use the AK’s reliability as supposed proof of its superiority as weapon is to take the comparison completely out of context, because no other rifle design is as mechanically reliable as the AK, either.

As compared with the various versions of the M16 system, it’s far less user-friendly in every respect. Its magazine insertion system is cumbersome and its selector switch is poorly located and loud to operate (“AK clack”). Further, it’s heavy, poorly balanced, and its sights are poorly designed as well.

From an accuracy standpoint, there is no comparison between the M16 and AK. As long as the upper and lower receivers are tight and the trigger is halfway decent, the M16 is capable of MOA accuracy, whereas a typical AK will produce 5 to 6 MOA at best. And, if a free-floated barrel is incorporated to the M16’s design, it becomes capable of ½-MOA or better, making it fully as accurate as a finely tuned heavy-barreled bolt-action precision rifle.

As a young US Army Infantry Sergeant and later, Officer, I can remember being less than impressed with the M16. But, I must also point out that while it took me some years to realize it, my dislike was based more on comparing it to previous rifles like the M14 and M1 Garand.

As I gained in experience and knowledge, I realized that infantry action had evolved and changed and that as a result, the era of the full-sized, full-powered battle rifle had passed. The assault rifle, along with tactics based on high air and ground mobility, had changed warfare forever and legitimized the assault rifle completely.

As I reflect on my long relationship with the M16 and its variants, I must say that I never had a malfunction with it in either training or in combat. I have had a number of failures to stop with it, the first of which occurred during the Vietnam War, but they were the result of the 5.56mm cartridge, not the rifle itself.

Final Notes
So, then, is the sun setting on the M16? No, I don’t think so. First of all, while the US Army has experimented with several other designs, none has thus far been so superior that it has been suggested as a serious replacement. Heckler & Koch’s XM8, though it performed well in testing, was abruptly cancelled and the FN SCAR has so far seen only limited testing as a possible SpecOps weapon.

“If it ain’t broke, then don’t fix it.” History shows that the basic M16 design is obviously good enough to allow continuous evolution and improvement. Think of the original M16, then the M16A1, M16A2 (rifles & carbines), M16A3, M4 and M4A1. That’s a lot of rifles, guys.

Heckler & Koch is now offering their version of it as the Model 416. It is said that imitation is the sincerest form of flattery, and perhaps this axiom is the best explanation of all. The HK 416 features gas-piston operation rather than the familiar direct gas feed into the bolt carrier and this is indeed an improvement. But otherwise, the weapon is an M4A1, plain and simple. Add to this the fact that the M16 production is licensed to dozens of countries around the world and the picture is complete.

A second reason I think the M16 system will be with us for some time to come may well be the most important reason of all. The US is embroiled in a wartime situation and I simply cannot see the M16 being abruptly replaced by anything else until that situation changes, regardless of how well it might perform. For obvious reasons, to do so would be a logistical and training disaster.

Moreover, the basic M16 design is adaptable to any number of newer, better, true assault rifle cartridges such as the exceptionally well conceived 6.8x43mm Remington SPC. If there is a change that might actually be feasible, I think this would be it. To change to another cartridge could easily be facilitated at second-echelon maintenance levels and would entail little more than re-barreling existing M16s and changing their magazine followers and springs to those appropriate for another cartridge.

The US’s War On Terror and conventional military operations in the Middle East will not end anytime soon, and I think that would be necessary before any change (other than perhaps a change in cartridge) would make sense. In addition, at the present time, there is no real contender to replace it, both the XM8 and SCAR being suspended at the present time.

So, in the end, I think the M16 in one form or another will continue in service for at least another five to ten years, perhaps even longer. And why not? It’s proven its worth in dozens of armed conflicts and has more than earned our respect. 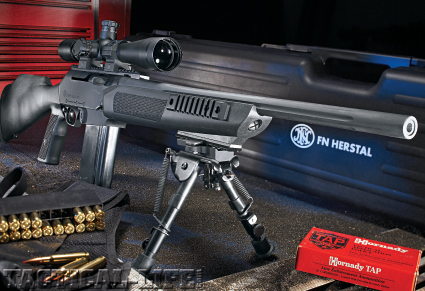 Though it has enjoyed a successful, if occasionally controversial career that has spanned more…