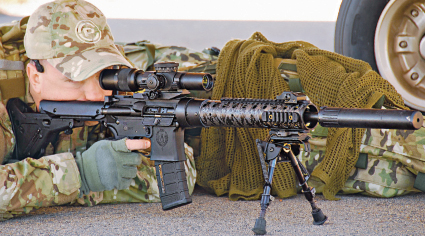 This country is full of good people, many of whom are extremely grateful for the service of their LE and military professionals. Those of who’ve served in uniform often refer to this large demographic as the “silent majority.” There are legions of great people out there whose gratitude has difficulty finding an outlet through which it can express itself. Today I get to write about how a few members of the gun industry have teamed up with their local LE officers to show how thankful they are for sacrifices made by others on their behalf.

The Police Unity Tour fundraisers take on many forms, but each year the various chapters take their funds to the memorial in Washington DC by bicycle.

In preparing to write this article, I spoke to Lieutenant Joey Brown of the Georgia State Patrol and Police Unity Tour Chapter VIII. The members of Joey’s chapter ride 230 miles in three days to deliver the funds.

Joey was good enough to take some of his time for an interview and explain to me what the tour did and what they hope to accomplish. Like old cops and soldiers do, Joey and I soon began to tell stories of friends and teammates lost and how we felt about preserving their memories. He said, “I want to convey how important this is to the law enforcement community, but especially to the survivors.”

When someone dies in service, many mourn the loss. We have a memorial service and a funeral and gather together to try to comfort one another. As time passes, we forget. Often it’s only the families and those closest to the fallen officer whose memories burn bright with the images of the departed. The National Law Enforcement Memorial is a way to ensure that we never forget the names of those who have died.

The Memorial invites the families of those fallen officers to the memorial service each year. It’s their way of reminding those families that the rest of us remember and honor their loss. We can never hope to heal the wounds left with the death of a husband and father, but we can make sure we don’t forget.

Like anything else, memorials and their caretakers require money to function. Museums that honor the profession likewise require funding if they’re ever to be built. This is where the money raised by the Police Unity Tour and given to the National Law Enforcement Officers Memorial Fund gets spent. To date, the chapters of the Police Unity Tour have raised close to 6 million dollars that they’ve donated to the Memorial Fund.

The Unity Tour raises money through fundraisers, one of which is an annual gun raffle. In years past, and this year too, the folks at Glock have donated at least one of their fine pistols. Lt. Joey Brown, who plays a very active role in fundraising, thought that expanding the gun raffle to include an AR type rifle would be a good way to encourage greater participation in the raffle.

Turns out that Joey knows a thing or two about the gun community and so he turned to American Precision Arms to see if they would be willing to build the guns for the Tour.  Jered Joplin is a great American who recognized the worthiness of the cause and not only volunteered his services, but also decided to donate two of the newly redesigned lower receivers for the build. Let’s take a look at what they built for the boys in blue.

APA Rifles
APA built two rifles for the gun raffle this year. One rifle was a version of their popular Lycan, an accurized AR designed to function as a patrol rifle. The other rifle that they did was their Urban Sniper model with a heavier barrel intended to function as a DMR or a sharpshooter’s rifle.

The most unique feature of both rifles donated to the tour were the lower receivers recently designed by a team led by Jered. This joint venture included Bobby Cauldell who brought in extensive manufacturing experience and Jason Teague, the Sniper Team Leader for the Gwinnett County SWAT team, who brought the operational experience.

The integral triggerguard found on the lowers has a beveled underside for additional comfort. It’s nice knowing that blisters on the middle finger of the firing hand are a thing of the past. There is also a tension screw with a spring and ball detent located under the pistol grip. This simple feature creates a consistent tension between the upper and lower receiver, and reduces the wobble often found between the two. This wobble reduction aids the shooter in maintaining a more consistent cheek weld in relation to whatever optics might adorn the rifle.

Jered and crew took no short cuts in the manufacture of these lowers. They are made from 7075-T6 51 billet aluminum, the most durable form of the material available. Likewise, the components included on these rifles are all extremely high quality and from known industry icons. They also show how much vendors in the industry support their law enforcement professionals by offering the components this year even though most are backordered well into the next. Some of the biggest contributors included Broughton Barrels, Magpul, DPMS, PRI and Trijicon.

Not Forgotten
We are all busy people. We have places to go, things we want to get done and goals that we hope to accomplish. My hope is that some of us take a moment to reflect on how much we appreciate the fine work done by the law enforcement community and how different our lives would all be without them.

It is a small thing to ask that we remember those who gave their lives in the line of duty. That’s all the Police Unity Tour and National Law Enforcement Officers Memorial hope to achieve. They do this so that those lives lost are not in vain, and that the families know that their officers died for people who appreciate it.

I’m proud to see that some members of the industry will put their backorders and profits aside long enough to contribute to so worthy a cause, one that hopefully helps us all show more gratitude and respect. Individuals interested in donating to the Police Unity Tour or the Memorial Fund can contact LT Joey Brown at [email protected] or by calling 404-374-7694, policeunitytour.com or Police Unity Tour, PO Box 528, Dept GW/LE, Florham Park, NJ 07932; 973-443-0030.

This country is full of good people, many of whom are extremely grateful for…