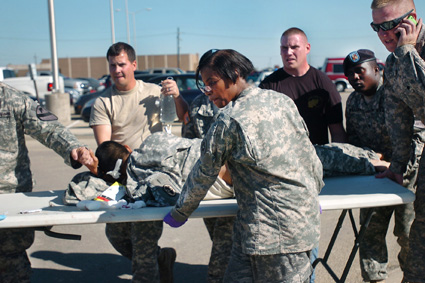 Inside the center, excitement and anxiety about an upcoming deployment were tossed aside and replaced with broken glass, blood and bullets when Maj. Nidal Malik Hasan, a psychiatrist at Carl R. Darnall Army Medical Center, allegedly shot and killed 13 Soldiers and wounded 43 others at the post deployment readiness center.

While news reports are constantly running updates on the incident, there are a group of Soldiers, first responders and civilians who lived the live feed.

Secretary of the Army, Hon. John McHugh said it was the heroic actions of those Fort Hood’s first responders who prevented a bad situation from getting worse.

“Their actions saved lives,” he said during a press conference here Friday.

Inside the deployment processing center, amongst blood draw stations and rows of waiting chairs, innocent people were dying. The gunman was shooting into the crowded screening area. Panicked Soldiers, desperate to survive, were breaking out windows and trying their hardest to find a way to safety.

Hoping to bring an end to the chaos, Sgt. Kimberly Munley, an officer with Fort Hood’s Department of Emergency Services, and Senior Sgt. Mark Todd, K-9 Division, DES, moved in to the fight. According to Todd, as soon as officers pulled up to the scene, people were pointing them in the direction of the shooter. Hasan reportedly started firing on Todd and Munley, who took cover behind a vehicle. Munley left her cover to pursue the shooter and Todd followed around the other side of the building, where the major was hiding.

When Todd looked around the corner of the building, he saw Munley on the ground. She had been shot. Hasan was hiding behind a light post and firing at people who were fleeing the scene. Todd recalls firing five shots at Hasan. The major fell. Todd then confiscated Hasan’s weapons and cuffed him. The entire exchange between Todd and the gunman lasted less than 45 seconds.

“We did just like we were trained to do…shouting commands and working as a team,” Todd said. “We had no time to feel anything, just to react.”

While law enforcement officers drew fire away from the trapped Soldiers, medics from the site and the neighboring graduation ceremony at Howze Theater began treating the wounded as best they could. Plastic tables were used as make shift stretches to move the wounded from the bloody building and get them evacuated to medical facilities.

Todd then started helping provide lifesaving care to wounded troops who were scattered around the readiness area; both inside and outside. Afterwards, Todd had the time to reflect on all that had happened.

“I felt so much for the wounded and the dead and their families,” he said.. “I didn’t feel guilty about shooting someone while doing my job; the only guilty feeling I had was that we didn’t get there sooner.”

After ambulances cleared out the wounded and most of the concerned crowd had dispersed, units across Fort Hood began the emotionally exhausting mission of dealing with their losses. The 36th Engineer Brigade had approximately 200 Soldiers at the site working on deployment preparations after lunch. Less than two hours later, the engineers had more Soldiers wounded and killed than any other unit on post during the incident.

“Every member of our organization was impacted by this tragic incident in some way,” said Lt. Col. Jason E. Kelly, deputy commander, 36th Engineer Brigade. “Commanders and senior noncommissioned officers were able to visit with these brave young men and women last night and their spirits are extremely high. These Soldiers represent everything that is good about America.”

Many of the Soldiers visited by the brigade leadership downplayed the severity of their injuries. The wounded showed more concern about the welfare of their fellow troops and families, Kelly said. The post and local community are making sure those Soldiers are taken care of and helping put those Soldiers’ minds at ease. A Fort Hood Grieving Center has been established and has both chaplains and counselors available to Soldiers and families.

“We take care of our own. We will grieve as a family,” said Chief of Staff of the Army Gen. George W. Casey Jr. during a press conference on Sadowski Field.. “We will stay focused on our missions around the world.”