0
SHARES
2
VIEWS
Share on FacebookShare on Twitter
Indian Para-Commandos are equipped with Israeli Tavor TAR-21 bullpup rifles. Note that the red beret is their signature, but Sikh members wear turbans.

India faces an array of threats that require constant vigilance on the part of its special operations units. The greatest threat remains Pakistan, which has supported various terrorist groups, including those in Kashmir, an area, which has led to wars between India and Pakistan in 1965, 1971, and 1999. Pakistan controls a portion of Kashmir while India controls another portion. Making the “Kashmir Problem” even more complex, China controls a portion as well. Pakistan’s ISI (Inter-Service Intelligence) has supported Kashmiri terrorists and other groups that target India. But Kashmir and Pakistan are not the only threats facing India. Illegal immigration from Bangladesh, as well as terrorist attacks launched across the border, have also kept Bangladesh in the crosshairs of Indian security forces. 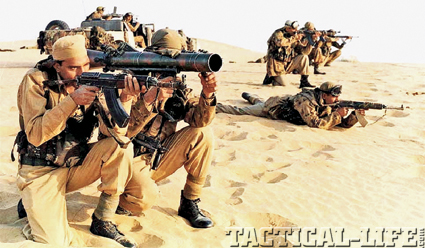 Elite Para-Commandos are trained to use what they can, including Vz. 58 or a Carl Gustaf 84mm rocket launcher.

India’s 1987 involvement in the Sri Lankan Civil War created animosity with factions from both sides, particularly the LTTE (Liberation Tigers of Tamil Ealam), which led to the killing of at least 1,000 Indian troops and the assassination of Indian Prime Minister Rajiv Gandhi by a suicide bomber. Since members of the LTTE had also killed five captured Indian Para-Commandos by placing burning tires around their necks, Indian special operations personnel view them as especially desirable targets. Indian counterterror forces face still other problems such as the Naxilists, militant Communist guerrillas operating in India. Many Indian security professionals consider the Naxilists the greatest internal security threat to India. And, if all of the politically inspired terrorists within India or infiltrating into the country are not enough, bandits are still a problem. Some years ago, one band kidnapped India’s most prominent movie star and held him for ransom.

Para-Commandos
To counter these threats, India has five primary special operations and/or counterterrorist units. The largest and best known of these are the Indian Para-Commandos. Formed in 1966, the Para-Commandos are trained for a variety of special operations. All members are parachute-qualified and have passed a six-month selection and probationary period, during which about three-fourths of the candidates are usually eliminated. Those surviving this selection period are sent to parachute training and awarded their wings and maroon beret. They are not fully fledged Para-Commandos, however, until they have successfully served in the unit for one year or for six months in combat, at which point they receive their Special Forces tab and beret badge. 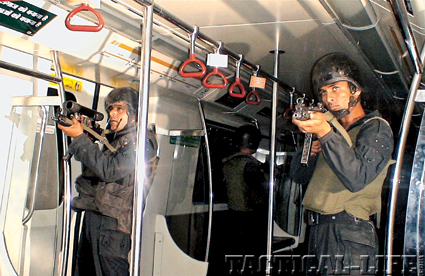 Another section of India’s special forces, the National Security Guards (NSG) are tasked with hostage rescue and counterterrorism operations within the country.