Info Overload: U.S. drones giving Navy more information than they know what to do with.

Because of the lack people and machinery to make sense of the information, the Air Force will cut back on how many of the drone aircraft it buys, Donley told a group of defense writers in Washington. National Defense magazine was among the publications attending the interview.

“We’ve clearly playing catch-up,” Donley said, according to Wired magazine’s account of the interview. “It’s not just the pilots and manning the aircraft. It’s also the [data] processing exploitation behind that …. We’re collecting data at rates well above what we had in the past.” 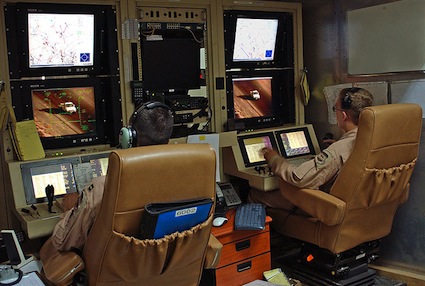 English: Captain Richard Koll, left, and Airman 1st Class Mike Eulo perform function checks after launching an MQ-1 Predator unmanned aerial vehicle August 7 at Balad Air Base, Iraq. Captain Koll, the pilot, and Airman Eulo, the sensor operator, will handle the Predator in a radius of approximately 25 miles around the base before handing it off to personnel stationed in the United States to continue its mission. Both are assigned to the 46th Expeditionary Reconnaissance Squadron. United States Air Force photo by Master Sergeant Steve Horton