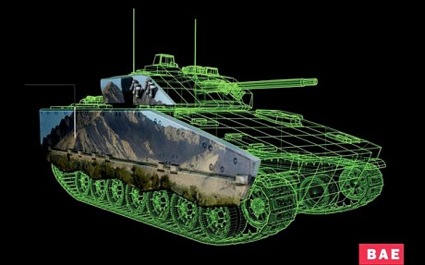 Armored vehicles will use a new technology known as “e-camouflage” which deploys a form “electronic ink” to render a vehicle “invisible”.

Highly sophisticated electronic sensors attached to the tank’s hull will project images of the surrounding environment back onto the outside of the vehicle enabling it to merge into the landscape and evade attack.
The electronic camouflage will enable the vehicle to blend into the surrounding countryside in much the same way that a squid uses ink to help as a disguise.

Unlike conventional forms of camouflage, the images on the hull would change in concert with the changing environment always insuring that the vehicle remains disguised.

In Helmand, for example, all armored vehicle have desert sand colored camouflage, which is of little use in the “Green Zone”, an area of cultivation where crops are grown and the Taliban often hide.

Up until recently such concepts were thought to be the stuff of science fiction but scientists at the defence company BAE Systems now believe battlefield “invisibility” will soon become science fact.

Scientists at the BAE hope the new technology will be available to use with the British Army fighting in Southern Afghanistan and in future conflicts.

The concept was developed as part of the Future Protected Vehicle program, which scientists believe, will transform the way in which future conflicts will be fought.

Source: Sean Rayment for the Telegraph.